How to experience the Bible in a digital world 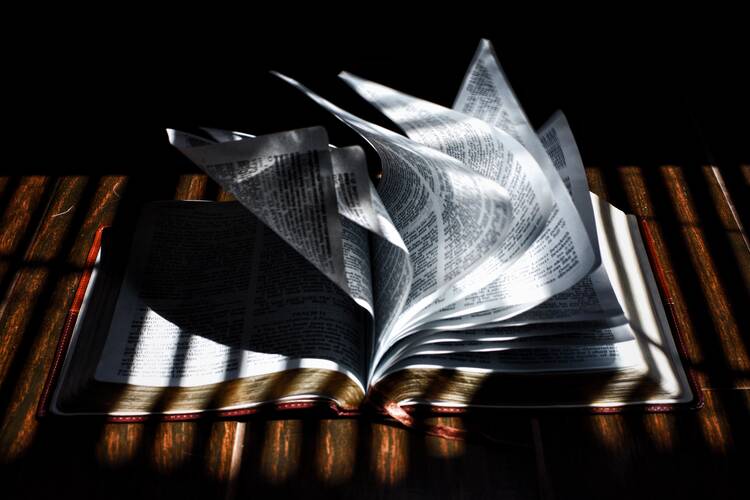 by Luke Palmer for unsplash

Centuries ago, monks used gold foil and pigments made from berries, boiled copper and insects to decorate pages of the Bible. Usually, these illuminated Bibles were used for liturgy, but sometimes wealthy patrons would fund these works of art or similar pieces for their own collections.

A 21st-century collective now hopes to revive certain elements of those practices in the digital age. Spark and Echo, cofounded in 2010 by the composer Jonathan Roberts and the actor and musician Emily Clare Zempel, aims to “illuminate” every single verse of the King James Bible by the year 2030.

The way it works is this: Patrons contribute funding and have a chance to mark with a “spark” particular verses they would like to see “echoed” by an artist, writer or musician. Then, the program commissions—and pays for—an original work based on those verses. Curators with backgrounds in the arts help find the right fit, and there is even an artist-in-residence program for more in-depth projects.

The collective aims to “illuminate” every single verse of the King James Bible by the year 2030.

On Spark and Echo’s website, viewers can see the entire Bible, with “sparked” verses marked by little flames. It is a multimedia experience, with videos, visual art, audio recordings, scripts, poems and artists’ statements about the choices they make. Not every piece is family friendly, but they are clearly labeled as such.

Michael Markham, the president of Spark and Echo’s board of directors and also a contributor, says that the collective helps to “redeem the relationship of artists and the church. The church used to be a fount of the greatest art in Western civilization, and now artists are pariahs in a lot of ways.”

He hopes that instead, they can tell artists, “we want your interpretations, and we want the challenging things that you interact with and that you find when you deal with the Scriptures—that can edify all of us. We want all of that, and we want to pay you for it.”

The church used to be a fount of the greatest art in Western civilization, and now artists are pariahs in a lot of ways.

Those who have participated in the project have a wide variety of faith backgrounds and artistic approaches. Mr. Roberts, the cofounder of the group, grew up in a conservative Lutheran church and wrote a song called “Deep Calls to Deep” that speaks to Psalm 42. And Joe Hoover, S.J., poetry editor for America, contributed a play in response to Micah 2 that references the 2008 housing crash.

Laura Pittenger, a Catholic playwright and director, also wrote in response to Micah, in this case chapter 3. She was inspired by “all of the lines about justice and about speaking truth to people who didn’t want to hear it.”

Her play, “The Flesh from Their Bones,”available as both an audio recording and a script, sets the concerns of Micah in a contemporary office. Michael, the main character, interrogates “The Man” about injustices he has committed. “The Man” deftly sidesteps the accusations until a surprising ending.

The project gave Ms. Pittenger a chance to encounter a part of the Bible she had not before, even with a Catholic school education. As a child, she learned “highlights” from the Old Testament, mainly Genesis, but not much about the prophets and their calls for justice.

“It is an opportunity to present an underappreciated part of the Bible and say, ‘This is God’s Word, and it’s happening right now."

Working on the play helped her process her reactions to the 2016 election. “The Old Testament has, weirdly enough, given me a lot of solace, to know that justice is something that we can hope for and advocate for as Christians,” she says. “I looked at this as an opportunity to present a sort of underrated or underappreciated part of the Bible and really connect it to the present and say, ‘This is God’s Word, and it’s happening right now.’”

For those not familiar with the arts, Mr. Roberts recommends starting with the artist statements. “We give artists freedom to respond however they would like, and often the verse and their process takes them down really interesting roads. Reading their story, then the verse, then taking in the art, that can be a great way to experience a work that may be otherwise intimidating."

Spark and Echo’s overall emphasis, according to Mr. Roberts, is respect: “We ask artists to respect the Bible—to respond directly to the text as opposed to just an abstract faith concept, to wrestle with the verse itself. We respect the audience by walking them through the creative process, particularly if it's a complicated work or verse—asking the artist to share their process. On the flip side, we ask the audience to respect the artist by allowing them the freedom to respond honestly. You don't have to like every work, but we do ask everyone to stand up for the process of an artist engaging and creating honestly in response to Scripture.”