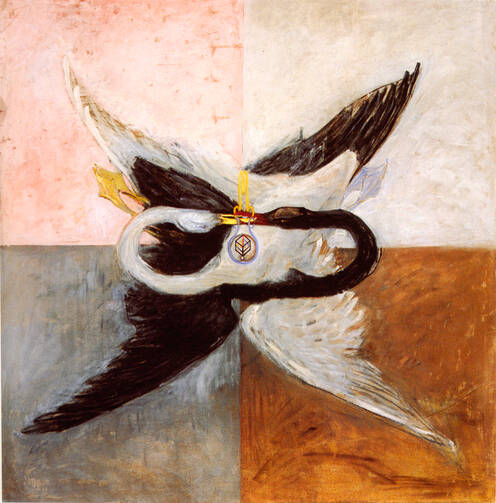 The Swedish artist Hilma af Klint (1862-1944) was a closet radical. In public, she was a typical churchgoing Lutheran. And as an award-winning artist trained at the Royal Academy of Fine Arts in Stockholm, she exhibited and sold naturalistic landscapes, seascapes and portraits. In private, however, she was an extraordinary risk taker as leader of The Five, a group of female friends who practiced spiritualism.

In 1906, af Klint began to paint non-objective art, focused on representing the spiritual world rather than the natural world. Considered one of the first abstract artists, af Klint’s paintings preceded the works of artists like Vasily Kandinsky and Kazimir Malevich, who are considered pioneers of the artform.

For the first time, viewers in the United States can see 193 of her earliest abstractions in “Hilma af Klint: Paintings for the Future,” the first major solo U.S. exhibition on view at the Solomon R. Guggenheim Museum in New York City. The exhibition runs fromOct. 12, 2018, through April 23, 2019, then travels to Chicago. I highly recommend a visit.

Although af Klint made her breakthrough more than a century ago, its significance is still being assimilated by the art world. Currently, her legacy of 1,200 nonobjective works is poised to catapult her into the pantheon of art history as historians replace Kandinsky, deemed the first “Modernist” painter, with the name of the woman whose daring abstractions predated his.

Considered one of the first abstract artists, af Klint’s paintings preceded the works of artists like Vasily Kandinsky and Kazimir Malevich.

Like many of her U.S. and European contemporaries, af Klint followed Theosophy, a popular spiritualist movement founded in 1875 byHelena Petrovna Blavatsky in New York and led by Rudolph Steiner in Europe. Steiner was a Scandinavian intellectual whom af Klint sought out at spiritualist conventions and meetings. Theosophy appealed to her interest in science, spirituality and philosophy. (Kandinsky and Piet Mondrian had similar interests and associations with Steiner.) The Five prayed, held séances and, through a medium, made group drawings.

In 1906 af Klint felt commissioned by one of the ascended masters to create a body of works, “The Paintings for the Temple.” She painted a set of 26 small pictures, then abruptly shifted the scale the next year. “The Ten Largest,” as she called the new series, were 10 feet tall, painted in thin coats of tempera on large paper sheets mounted on canvas. She used complementary colors—blues and oranges, reds and greens, purples and golds—as well as biomorphic and geometric shapes. Her lines circled, spiraled and swirled, broke into dashes and morphed into letters or symbols that looked like a script. With remarkable originality, she expressed the human life cycle.

While af Klint knew she had made a breakthrough in 1906, she decided to keep her abstractions private.

These 10 works are the first works shown in the Guggenheim’s exhibition this year. In a single room, they tower over the viewer. The effect is rapturous. This curatorial wisdom allows these works to convey immediately that af Klint (virtually unknown by the public) is a force to be reckoned with. The giants hold you in the room long enough for you to realize that these paintings (which look contemporary and almost familiar today) are more than a century old. It takes time to realize how they might have shocked the artist and her contemporaries, none of whom had seen anything like them before. You begin to appreciate af Klint’s radical trip into the unknown.

The artist spent nine years creating 193 paintings for the “Temple,” which forms the core of the Guggenheim exhibition. For the rest of her life, the artist painted works for a spiritualist temple not yet erected, but which she herself hoped eventually to fill, perhaps even to build.

While af Klint knew she had made a breakthrough in 1906, she decided to keep her abstractions private. She reasoned that her works would not be well received, given her gender and the artistic biases then reigning in Stockholm. She was practical: The art market enabled her to make a living, so she sold only her naturalistic work.

Before she died in 1944, af Klint specified in her will that none of her works be shown for 20 years after her death. She knew that the Swedish avant-garde remained unreceptive to abstraction. (Kandinsky and the Bauhaus “modernists” had been rejected by Hitler and forced out of Germany a decade earlier.) So-called degenerate art had been destroyed. And the world was still at war. Hilma af Klint looked to posterity for a fair assessment of her work.

The artist’s star is rising, given the “Paintings for the Future” exhibition and catalog, other major shows, and the labors of the eponymous foundation set up by her heirs to promote her work. The future af Klint hoped for seems to have arrived.

Thank you for this post. Best of luck!
discord servers free

Thank you for introducing us to another talented, yet totally unknown female artist. I do hope you are correct in your prediction that she will soon be added to the canon of art history! Af Klint's work reminds me of the work of Hildegard of Bingen, the 12th-century nun and mystic who illustrated her heavenly visions in a largely non-figurative way. It is intriguing to me that both these women were creating art as part of their spiritual practice.