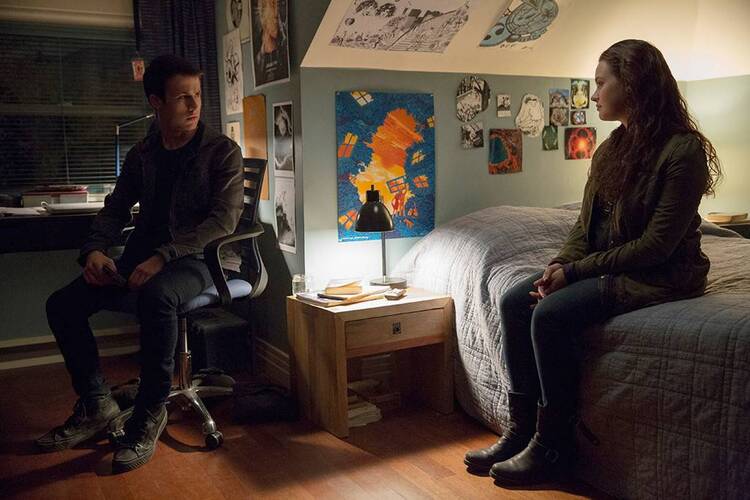 Forgiveness is an underlying theme in the second and latest season of the controversial Netflix teen drama series, “13 Reasons Why.”

“I can love you and still let you go,” Clay says, standing beside a bare altar in what appears to be a Catholic church, as the posthumous spirit of Hannah watches him from the back pew.

What '13 Reasons Why' gets wrong about suicide
Jake Martin

“13 Reasons Why”—based on the 2007 young adult fiction book by Jay Asher, who was not involved in the new season—tells the story of a small town shaken by Hannah’s suicide and the tragic events leading up to it. The series has the potential to open the door to important conversations among families, the binge-watching Netflix generation and the church.

Parents and some Christian groups, however, have claimed the show “glorifies suicide,” promotes suicide as a path to martyrdom and uses death as a “valid” way to get revenge and attention.

But Season 2 offers a more complex portrayal that merits reflection. In this season, released in May, Hannah’s tragic death is revisited through the eyes of her classmates, who each testify in court—Hannah’s parents are suing the high school for neglecting their daughter’s cries for help. Season 2 also handles timely issues, including school shootings and the #MeToo movement, and emphasizes the importance of having supportive, trusted relationships.

“Our hope was that people’s feelings about who was responsible would evolve over the course of the season,” said series creator Brian Yorkey, adding that the show’s writers and producers were also divided over who deserves blame for Hannah’s suicide: her classmates or her school.

Still, the show fails to help the audience understand who made the decision to end her life: Hannah. Instead, she is remembered one-dimensionally, as a sort of “heroine,” especially by Clay, who throughout both seasons blames himself for being unable to save her.

In the final episode the show makes a slight but significant reference to faith and spirituality, when Andrew and Olivia Baker meet with a Catholic priest to make arrangements for their daughter’s funeral.

It is an important moment of hope in a series that seems to pile on trauma after trauma.

“Before we start, I am distrustful of religion,” Olivia says immediately, admitting she regrets never including religion in their daughter’s life. “We were ashamed to have a funeral—but after everything that happened, if there is a God, I want him to see that my little girl deserves his care.”

The priest (Anthony Rapp) imparts the message throughout the episode and later in the funeral service that God is a just, forgiving God; he does not judge “Hannah’s decision or the circumstances that led her there.” After the service, the priest also comforts a grieving Clay Jensen, after Clay asks him about the afterlife.

It is an important moment of hope in a series that seems to pile on trauma after trauma.

“The God that I believe in, a just God, would have mercy on a soul like Hannah’s,” he responds.

But Season 2 does not end on this note of hopeful forgiveness. Instead, a plot twist involving gun violence and a graphic sexual assault leaves viewers feeling confused and anxious for what is to come.

Instead of these bleak and sensationalist endings, let us hope the next season of “13 Reasons Why”—and other teen dramas like it—will spread a more constructive message to the impressionable young adults who watch them. Shows with dark themes rooted, to some extent, in reality should also include instances of real-life courage, faith and above all, a little human kindness.

I can relate to the character, "Hannah," who committed suicide due to traumatic experiences . I attempted suicide because of depression due to being gay in 1994. Fortunately, I survived, regretted my act, and received forgiveness and consolation through the Sacrament of Reconciliation. Sadly, that same year my friend who was a co-worker took her life by hanging herself. I agree that parents and other adults should discuss the tragedy with their teenage children, since many youth at that age are vulnerable and attempt suicide. However, suicide must not be "glamorized." My friend had a funeral Mass, and after the priest gave a brief homily and expressed his sympathy, her sister was permitted to speak about all the good her deceased sister did as a daughter, friend, sister, and Music teacher, working with disabled people . The Church, while opposing suicide as an act against God, the Creator of all life, also teaches that our merciful God understands that mental illness or other severe life difficulties may lead a person to choose deliberate death. I believe that such people may gain eternal life, perhaps after a certain period of time of purification in purgatory.

I binge watched the first series. I thought it would have turned out better if the girl had telekinetic powers. Oh, right. That's been done.

of course we should forgive one another besides God forgives us

I have a lot of issues with how this show has dealt with the issue of suicide. I think it romanticizes suicide I have heard a lot of criticism that people think when you say it glamorizes suicide that those people don't want to face the issues of suicide and mental health in this country. However I am one of the people who have struggled with both of those things. And a lot of people who have had those real life struggles have criticized the shows desire to show graphic violence and assault. Licensed mental health and psychology experts have talked about suicide contagion and about how graphic glorify depiction of it can be a part of causing that however this information is always treated as worthless. and I think that shows that people aren't showing care for the mental health community. I think people find the show more entertaining than they do edifying and I think the people who created the show should have been more responsible with the topics that they were dealing with.

Absolutely! Very well stated. It's basically a ragtag collection of tropes from those ABC Afterschool specials crocheted together with the ultimate suicide fantasy--"they will be so sorry when I'm gone.." But season two embroiders on a new layer of suicide porn--"I'll get to watch them suffer for what they did to me." Then, just in case that's not enough teen angst (from mid twenty year old performers) we'll jam a school shooting in there as well.

I have to admit I'm surprised to see this article seemingly promoting such a poorly thought out and poorly written series.

To forgive is anyhow connected with saying that it is all true, that we believe the evil deed. But this is not justification. Forgiveness means that help with assignment writing you satisfy yourself with respect and you spread that love out and deny to hang onto the anger or hate that was caused by the behaviors and hurts.