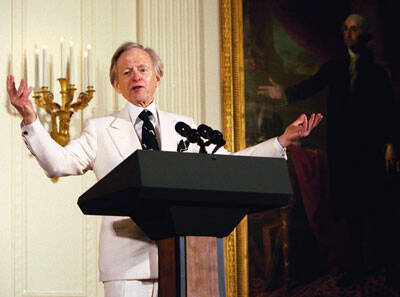 The death of Tom Wolfe on Monday at the age of 87 has prompted a number of reminiscences from his friends and admirers, along with many obituaries of the sui generis writer and reporter. These literary appreciations reminded me of the stellar quality of his genre-bending nonfiction, The Electric Kool-Aid Acid Test and The Right Stuff,in particular. Wolfe himself once declared that journalism had “wiped out the novel” as the premier American literary genre, and his own role in the founding and popularizing of “the new journalism” certainly contributed to the rise of nonfiction at the expense of the novel. Nevertheless, Wolfe tried his pen at the latter as well, including 1987’s much-ballyhooed Bonfire of the Vanities and a number of works of fiction in the years since.

Over the years America reviewed many of Wolfe’s books. Peter Quinn wrote on Bonfire in 1988, finding plenty to criticize but ultimately praising Wolfe’s ambitious attempt to capture the “Greed is Good” generation:

Wolfe has not created great and memorable characters, nor has he done for New York what Dante did for heaven and hell, or Dickens for London, or Joyce for Dublin. Few novelists achieve such things, especially on their first try. But he has succeeded in puncturing the pretensions of The Imperial City, the air running out in something between a Bronx cheer and a long, soft hissssss.

In 1999, Ronald Wendling reviewed A Man in Full for America, noting that “it has been a while since I have enjoyed a book as much.” While he didn’t give the novel a pass for some of its flaws, including what he saw as blatant sexism (“all the women in A Man in Full orbit around men and money”), he did credit Wolfe for documenting the 1990s as well as anyone:

While the “new journalism” has borrowed the devices of fiction, Wolfe’s fiction has continued to document the times. He satirically takes on the 90’s in this new novel, and, like the period it records, his pages ooze with money. His houses and offices are plush, and his lavish parties are catered by someone who dresses like a host on a television show for children.

In more recent years, 2013 brought a review of Wolfe’s Back to Blood, by Brian Abel Ragen, who found it of a piece with Wolfe’s other novels in its themes and preoccupations. “The central figures of all Wolfe’s novels face losing the social network that has created their identities and must find a new way, quite literally, to be,” Ragen observed. But how can people define themselves when society itself seems to be collapsing? “The modern world’s stock answers do not seem to work” for Wolfe’s characters, Ragen notes. “Money is both disappointing and fleeting. Sex, as an end in itself, leads to disappointment and degradation.... Art for its own sake is just a scam. What is left?”

Peter Quinn on Tom Wolfe: He succeeded in puncturing the pretensions of The Imperial City, the air running out in something between a Bronx cheer and a long, soft hissssss.

On a personal note, Wolfe’s passing also occasioned a virtual trip on my part into the archives of my Hotmail account (still have it!), back to 2005, for a book review of one of Wolfe’s novels that I wrote...and that never saw the light of day.

I wrote my first article for America in the spring of 2004, an “Of Many Things” column back in the prelapsarian days when the editor in chief didn’t always covet the inside cover for himself. I was a Jesuit novice and an intern at the time and was delighted the magazine would publish me. That fall I enrolled in the graduate theology program at Fordham University. Being back in a university setting made me intrigued by a new book out that year, Wolfe’s I Am Charlotte Simmons, which centered on a young woman’s experience of her freshman year of college and was getting some brutal reviews in the popular press. Michiko Kakutani of The New York Times called it a “cheap, jerry-built affair,” while Michael Dirda announced that readers of the novel had been “soiled by its cloacal vision and emotionally manipulated by its author” in The Washington Post. I read it with rapt interest and sent off a 1,000-word review of the book to America’s editors over Christmas vacation, having most certainly neglected my theology studies to get through the novel’s 676 pages.

A few months went by and I didn’t see the review, either in print or in America’s fairly new forays into online content. In the meantime, I finished my year at Fordham and began an M.F.A. program in nonfiction creative writing at Columbia University. One day in our first semester, lo and behold, a tall drink of water in a three-piece white suit appeared in the corridors of Dodge Hall: Wolfe himself. My classmates and I were awestruck and adoring—one could argue that Wolfe’s nine books from 1965 until 1981 were the gold standard for “nonfiction creative writing.” Most of our questions for Wolfe centered on his nonfiction or on Bonfire of the Vanities, and I found myself wishing I had my review of I Am Charlotte Simmons to show him.

No dice—the America editors had killed it. A central focus of the review had been on Wolfe’s deep dive into collegiate social life and jargon, including “what Wolfe bluntly labels ‘f— patois,’ a vulgar amalgam of Valleyspeak and obscenity in which the f-bomb functions as a noun, verb, adjective, and anthem.” It was a bit much for America’s readers, the editors thought, and perhaps we shouldn’t even be engaging with novels about what I had described as “a four-year debauch within the twin poles of sexual frankness and alcoholic excess.”

Perhaps we shouldn’t have even been engaging with novels about “a four-year debauch within the twin poles of sexual frankness and alcoholic excess.”

I kept writing for the magazine on other topics and soon forgot about the Wolfe review. Reading it 14 years later, I am horrified by how time-bound and anachronistic it sounds, in part because of the mise en scène in which it was written: the first 15 seconds of the social media age. How do I know? Because of cringeworthy paragraphs like this one:

A prime example is the website www.thefacebook.com, a wildly popular phenomenon among college students this past year, which allows students to post profiles of themselves (complete with photo, phone number, hometown and even political affiliations) and explore the profiles of peers. The site also allows participants to list what they’re seeking in the area of interpersonal relationship, with possibilities ranging from “friendship” and “dating” down to bluntly stated preferences for “random play” and “whatever I can get.” The university-specific site does not allow non-enrolled visitors to peruse listings—lest Daddy find out that little Suzie is offering “random play,” presumably—but encourages students to send notification of their interest in strangers by electronically “poking” them. Sure, it’s over the top, but the meat-market mentality behind such a craze can still give one pause. Truth, in other words, can be more unsettling than fiction.

Forgive me, dear reader: It was 2004. Rest in peace, Tom Wolfe. I’m off to read some appreciations of your craft on www.thefacebook.com and perhaps on The Twitters, too.

I think the "Bon Fire of the Vanities" is one of the best books ever written[ it's one of the best that I've ever read]. I think he did capture the Zeit Geist of New York. It was hysterically funny and brilliant and one of those books I could not put down.[May the light of Jesus Christ light shine upon you, Tom Wolfe]. 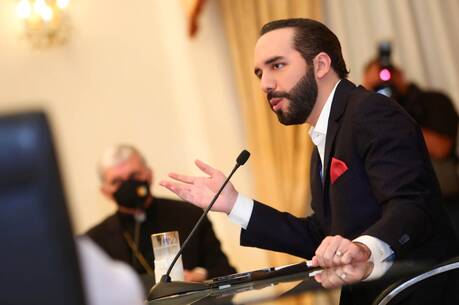 El Salvador’s president made Bitcoin a national currency. A Jesuit says the project reminds him of ‘the seven deadly sins’
President Bukele enjoys strong popularity at home and in neighboring Central American countries, but his government faces accusations of authoritarianism and corruption.
David InczauskisJanuary 24, 2022