Catholic priests don’t wear suits to Mass. So why so many tuxedos at the Met Gala? 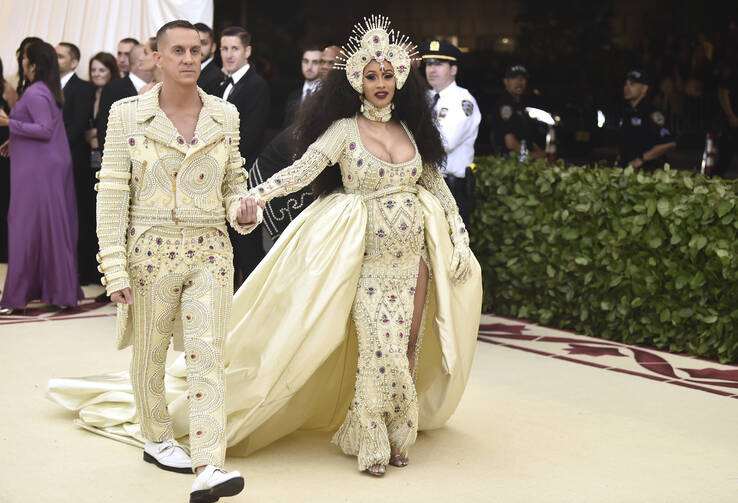 Jeremy Scott, left, and Cardi B attend The Metropolitan Museum of Art's Costume Institute benefit gala celebrating the opening of the Heavenly Bodies: Fashion and the Catholic Imagination exhibition on Monday, May 7, 2018, in New York. (Photo by Evan Agostini/Invision/AP)

Though Rihanna’s miter and Blake Lively’s gemstones understandably dominated headlines after this year’s Met Gala, the outfit that struck me the most was Cardi B in a gold Moschino dress. Her bejeweled baby bump was a beautiful rendition in a culture that could use far more depictions of a visibly pregnant Mary, Queen of Heaven—and a celebrity culture that is beginning to rejoice in pregnant bodies rather than hide them.

Such a celebration of the body in its full physicality is exactly what I would have expected at an event inspired by the “Catholic imagination,” especially in light of the fashion industry behind the gala, which celebrates the adornment of the body. And yet designers seemed to shy away from that on Monday night. (There were many crosses on display but I didn’t spot a single crucifix, except the one around Cardinal Timothy Dolan’s neck.) In fact, there was fairly little Catholic imagination on display at all.

No male celebrity was bold enough to break free of the confines of the standard well-tailored pant.

This was most obvious with the menswear, which was disappointingly bland even for the Met Gala (at which the “most memorable” menswear still includes a whole lot of straightforward suits and shirts). To be fair, nearly all red carpet events are subject to this critique—as is high fashion more generally, which continues to be largely (though decreasingly) an industry of men designing for women. And there were notable exceptions this year, like Migos in sequined iconographic jackets and Chadwick Boseman in a vaguely papal, ornamented white ensemble.

But given this year’s theme, the limited gender expression was striking. The garments on the red carpet and within the exhibit attest to Catholicism’s major contribution to the world of fashion: clerical wear, from liturgical vestments to everyday cassocks. The prevailing Catholic silhouette is descended from the ancient Greek and Roman tunic. Yet no male celebrity was bold enough to break free of the confines of the standard well-tailored pant.

So, was the Met Gala sacrilegious?
Justin Shaun Coyle

The one who came closest was Jordan Roth in Givenchy, with a long evening coat and beaded cape in cardinal red. In an interview, Mr. Roth said that wearing the ensemble “actually took me to a place of great reverence and a place of great emotional stillness. Which is really interesting because that is, I think, the goal of the architecture and the clothes that we are celebrating and exploring in this exhibit.” He added that he was moved by “how the aesthetic works on you to lift you, to give you a sense of calm and of what’s bigger than you.”

It is not surprising that one of the few designs to truly engage the Catholic imagination would bring about such an emotional response. Liturgical art is designed to bring the worshipper out of their time and place, using ancient aesthetics to unite them not only with tradition but with eternity. In other words, the reverence Mr. Roth describes is a product of the timelessness evoked in the art he wore. One more black tuxedo, adorned with cross brooch or not, is simply too much a product of its time to transcend the wearer’s own circumstances, let alone inspire any sort of deeper reflection on its meaning.

Given this year’s theme, the limited gender expression was striking.

Similarly, while Zendaya was rightly celebrated for her Joan of Arc look created by Versace, a glitzy dress with a train is a peculiar homage to a girl who was specifically persecuted for dressing like a man (among other things). As impressive as the dress was, it also represented the superficial engagement with the Catholic imagination that prevailed at the gala, which honored the church’s contributions to visual culture at a completely surface level. If there was any meaningful understanding of the Catholic imagination going on here, a hairshirt or two would not have been out of place on the red carpet,given the events of this past year.

Moreover, the Catholic imagination suggested by the gala was limited in a more obvious way: its nearly exclusive focus on southern Europe. Again, notable exceptions exist, like Letitia Wright’s collaboration with Coach inspired by Ethiopian Christians. And to some extent it was inevitable that an exhibit involving the Costume Institute’s understanding of high fashion—read: a plethora of Italian Catholic designers like Dolce & Gabbana and Gianni and Donatella Versace—should result in a parade of repetitive Italian reds and Spanish veils. Reasonable discomfort with potential cultural appropriation may also have played a role here. Even so, the gala’s reflection of the Catholic imagination as a southern European phenomenon was unexciting, to say the least.

A hairshirt or two would not have been out of place on the red carpet, given the events of this past year.

The artistic response to the Met Gala is a reminder that the Catholic imagination does not need to be so dull. Underwhelmed by the uninspired choices on the red carpet (“you really can’t slap a cross on a garment like it’s a bumper sticker and expect credit”), illustrator Kevin Wada issued a challenge on Twitter with the hashtag #Metsona, asking other artists to sketch what they would have worn to the gala instead.

The results were breathtaking and inventive, from Débora Moreira’s many-eyed seraph to Talia Mirai’s Sagrada Família dress. Particularly striking were the sketches that departed from the gala’s Italian and Spanish aesthetics, such as Yoshi Yoshitani’s ensemble in honor of the martyrs of Japan, Irene del Mar’s invocation of the Virgin of Guadalupe and Kate Sheridan’s adaptation of the Book of Kells.

#metsona thank you @kevinwada for the push to drawing what i had already wondered since the event started.

Much as I would love to think I'd wear some super elaborate ensemble to the Met Gala, I know my style. Sagrada Familia in Barcelona is my favorite cathedral I've ever seen. Thanks @kevinwada for this cute idea! #Metsonapic.twitter.com/NUZoYuXKaH

Interestingly, many of the#Metsona sketches involve a memento mori theme, which was lamentably absent from the gala. Preparation for death has not been a prevailing topic in high fashionsince the 16th century, but it has certainly not been taboo, with skulls appearing in landmark pieces by Alexander McQueen and Rei Kawakubo. More important, it is an essential characteristic of the Catholic imagination, reveling in not just the physical nature of the body but its temporal and eternal destinies. This is a culture that buries bones in its altars, builds chapels out of skulls and carries the broken yet whole body of Christ through the streets. When Sarah Jessica Parker walked out on that carpet with a seeming reliquary on her head, only to reveal a smiling nativity scene within it, bloodless and plasticine, the game was up.

Catholicism is already weird. It is the United States that is so incredibly boring. 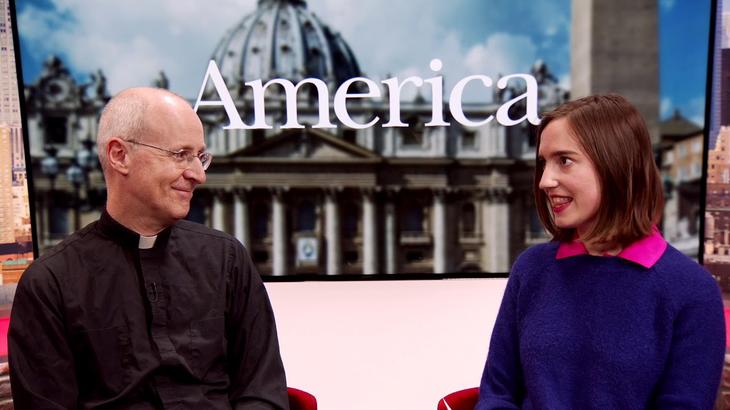 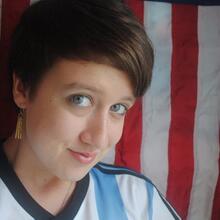 Catherine Addington is a writer and a doctoral student in Spanish at the University of Virginia.

Oh, great! Now the Prosperity Gospel is attempting to reinvent itself as Catholic imagination. The difference here is between those who, say, frequent a fine restaurant for the food, service, and companionship as opposed to those who go to see and be seen. Then I noticed a link with another Fr. James Martin interview...(sigh)...like a moth to a flame....

Of course you mean their birth-assigned gender. Not their gender expression.

Thanks to the author for noting the "superficial engagement" with the Catholic tradition. The overload of "engagement" with "the dark side" was certainly on display and so dizzyingly irreverent and worse in some aspects, that I question the exuberant support it got from high-profile Catholic figures. Anyone out there offended to see Jared Leto dressed as Jesus Christ and his companion as the "Mother of Sorrows"? Of course, the Church has to engage with modern culture and all its paucity of spiritual discernment, but "it'" doesn't, or rather "we" don't, have to applaud it. It's challenging to "be in the world but not of it". God give us wisdom and courage to guard the Sacred, at the risk of appearing colossally un-cool.

When I walk down a street in my diverse neighborhood , I am often struck by the beauty of the sight of some young Muslim woman in a hijab, [ not a burka] whose framed graced face looks like she stepped out of a European painting of the Virgin Mary. Now I know where the Europeans got their veiled Mary's from; appropriation of Middle East Muslim culture. Not that I object to cultural appropriation, civilization develops through cultural appropriation, but this obvious fact has not even registered on the consciousness of most westerners it seems.

my western consciousness sees beyond the hijab to a patriarchal home where Muslim women are subjugated and treated
as second class citizens. You can keep your cultural appropriation.

"Now I know where the Europeans got their veiled Mary's from; appropriation of Middle East Muslim culture." - Now.. I know most Catholics don't actually read their Bible, but this one's kinda a gimmie:
"But I want you to understand that the head of every man is Christ, the head of a woman is her husband, and the head of Christ is God. Any man who prays or prophesies with his head covered dishonors his head, but any woman who prays or prophesies with her head unveiled dishonors her head—it is the same as if her head were shaven. For if a woman will not veil herself, then she should cut off her hair; but if it is disgraceful for a woman to be shorn or shaven, let her wear a veil.

For a man ought not to cover his head, since he is the image and glory of God; but woman is the glory of man. (For man was not made from woman, but woman from man. Neither was man created for woman, but woman for man.) That is why a woman ought to have a veil on her head, because of the angels....If any one is disposed to be contentious, we recognize no other practice, nor do the churches of God." (1 Corinthians 11:3-10,16)

The more I don't understand why the catholic hierarchy took part to it.

Regarding the "celebrities," might one say the obvious? Freak Show!