Can a college course teach students how to date? 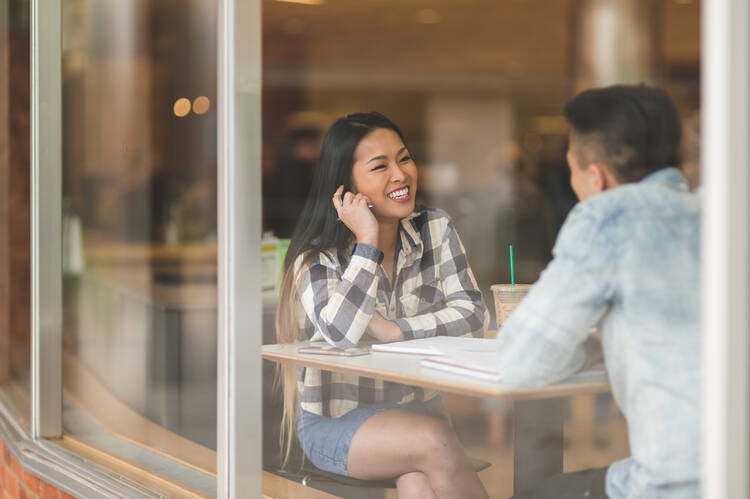 Every year, freshmen in Boston College’s Perspectives Program read the great books of Western literature, covering texts ranging from Plato and Aristotle to Descartes and Kierkegaard. But alongside their encounter with these seminal thinkers students in Kerry Cronin’s classes also tackle what has apparently become an even more abstract and rarefied topic on college campuses: dating.

What, one might ask, is a philosophy professor doing talking about dating? Over a decade ago, Prof. Cronin—who, in the interest of full disclosure is a friend—realized that her bright, achievement-oriented students were able to engage the big thinkers of the Western canon in the classroom on how to live a meaningful life or what kind of person they wanted to become, but had little experience outside the classroom tapping into the social courage necessary to bring those values into their daily lives.

Kerry Cronin’s classes at Boston College tackle what has apparently become an abstract and rarefied topic on college campuses.

“Too many students let their vulnerability or fear of rejection rule their decisions,” says Ms. Cronin. That lack of courage was reflected most acutely on campus in the hook-up culture that had largely replaced dating, an experience that students found satisfying in the short term but ultimately left them unhappy. “Dating has become a lost social script,” she says. Ms. Cronin decided to try to reintroduce dating and created a unique assignment for her students—both men and women—in which they had to ask out someone they were interested in and then plan and pay for the date.

What began as a mandatory assignment for her students in 2005 garnered significant attention and has since grown exponentially. Ms. Cronin speaks regularly around the country on the topic and gives an on-campus talk at Boston College annually that draws hundreds of students and has become so crowded that they have to turn people away.

On April 17 Professor Cronin’s small social experiment hit the big screen with the release of “The Dating Project,” a documentary film that features Ms. Cronin and her students as the foundation for an exploration of dating in college and beyond. Produced by Paulist Productions, “The Dating Project” follows the stories of several Boston College students as well as single people in their 20s, 30s and 40s. The film has received extensive coverage from media outlets around the country and debuted last week on 600 screens at multiplexes nationwide as a one-time Fathom event. It will soon be available on DVD and streaming services and will include a study guide for use in classrooms and group settings.

“I was really relieved and happy after seeing the finished product,” says Ms. Cronin, who appreciated the fact that the film is ultimately driven by story and humor. “The students I deal with want to find themselves in other’s stories… They feel adrift in a culture where the stories can get pretty whacky. It is helpful when they can recognize their own loneliness, discomfort and pain in other people’s stories as well.”

When putting together the updated version of my book The Freshman Survival Guide, Ms. Cronin offered up the following tips:

1. If you want to date, don’t hook up. People are paying attention, and if you’re doing it, they’ll assume that’s what you want.

2. Ask out someone who is a legitimate interest or at least a romantic question mark for you. Don’t wait for your soulmate to fall out of the sky. Dating is something you get better at if you learn how to date well and break up well. First and second dates ought to be about finding out if the romantic interest is there and mutual. If it doesn’t work out, be up front and dignified in taking a pass.

3. Get courageous. Step up and try to ask the person out in person. This is for men and women. The dating scene takes courage, and because the hookup script is so dominant (that is, loud) on most college campuses, it’s just wrong to assume that men should be the only courageous ones.

4. When you ask, suggest a plan within the next two to three days. If you ask someone out for “next week,” it just won’t happen.

7. Be prepared to move on if the person you’re interested in doesn’t want to date. If she or he prefers the hookup scene, that probably won’t change. Save your heart and move on.

8. Find two to three friends who support you in your desire to date. These might not even be your closest friends. Unfortunately, lots of good friends unconsciously sabotage us in our efforts to avoid or walk away from the hookup scene.

9. Don’t just opt out. College is a great time to date. Dating is a great way to find out important things about yourself and others. Try.

10. Figure out how to break up well. If college students knew how to manage dignified and drama-free breakups, they would date more.

College! Subject needs to be dealt with in grade school and high school along with some courses in how to be a parent along with anger management.

While reading this I got the idea of creating a personal dating website for the particular university and that can be used by their respective different streams of students. If college starts to teach how to date then they need a practical platform too right? I found its easy to create dating website with Dating Software dating software https://www.wpdating.com/dating-software/

According to me, young students should be careful for dating nowadays. Fake accounts on insta, facebook are getting populer. Nobody knows that who is the real profil.
https://www.clubvet.com.tr