How art can deepen our experience of Lent and Holy Week 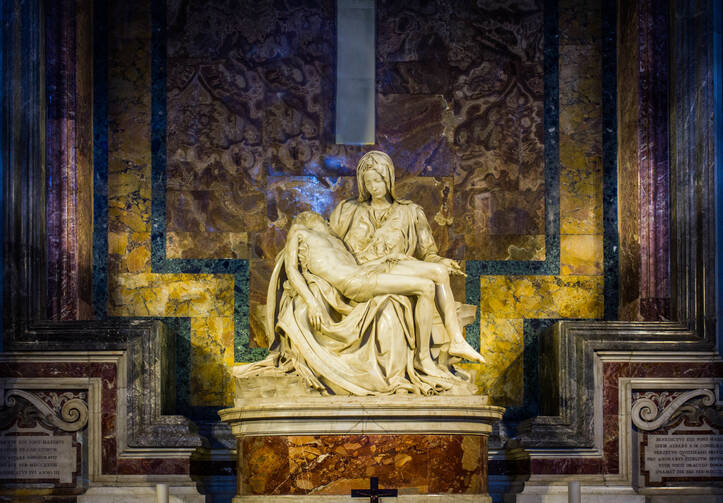 This past year I discovered the works of Ivan Mestrovic. I had not heard of Mestrovic until I visited the city of Split on Croatia’s Dalmatian coast, but some readers of America may be familiar with his work.

The Croatian sculptor and artist ended his career teaching at Notre Dame. Many of his sculptures are located on the grounds of the campus; others are exhibited in the university’s Snite Museum of Art, and his 1942 marble Pietà lies in its Basilica of the Sacred Heart. A plaster model is in the Mestrovic Gallery in Split along with bronze castings of the heads of Jesus, Mary, and Mary Magdalene from that work.

To see these and other artworks at the Mestrovic Gallery is to apprehend what a major artistic talent Mestrovic was, a sculptor of formidable range and power who stands on a par with Rodin, who was an early influence on. him. Rodin, in his turn, called Mestrovic “a phenomenon” and an artist greater than himself.

Mestrovic’s 1942 Pietà is a dramatic piece, inspired by Michelangelo. It features four figures. A standing Joseph of Arimathea looks down at the body he holds up while the two women crouch, gazing up at Christ. Jesus’ lifeless head is counterpoised by his mother’s; his face is a portrait of death; her face is death in life. It’s an unsparing rendering of fatality and desolation.

Located in a graceful, white-pillared villa Mestrovic built for himself and his family in the 1930s and later donated to the people of Croatia, the Mestrovic Gallery in Split sits on a hill overlooking the Adriatic Sea. The garden leading up to the entrance holds half a dozen large sculptures: Persephone with her hands upheld in supplication; two reclining women; several life-sized women holding musical instruments. If the religious work found inside the gallery showcases Mestrovic’s ability to plumb the depth of human anguish, the female forms exhibited outside show his ability to create elegant forms, both monumental and beautiful.

Up the road from the gallery, a short 10-minute walk away, in the Church of the Holy Cross, are wooden reliefs of the life of Christ that Mestrovic worked on for 30 years. he came back to it at desperate times in his life during World War I and II and later during his exile from Yugoslavia.

Befriending one or more artists, studying their Christian art—whether displayed on a museum wall or reproduced in a book—strikes me as a rich, rewarding Lenten practice, a way to immerse one’s self in both art and faith.

Born in 1883 to peasant farmers, Mestrovic grew up in the Austrian-Hungarian Empire and dreamed of an independent South Slav state. His early work reflected his romantic view of the past and his nationalist ideals. During World War I, he became both a celebrated artist and an influential spokesman for Yugoslavian independence.

When the Nazis invaded Yugoslavia in 1941, fascist Croatian rebels formed an independent Croatia and imprisoned Mestrovic for five months after he refused to join the regime. This searing experience is reflected in the 1942 Pietà, one of his most celebrated works, and the 1946 “Job.” Rough-hewn, contorted and grotesque, the seated Job is a mangled figure broken by suffering.

David Hockney is popular, but is he a great artist?
Karen Sue Smith

I never think of turning to art to deepen or enhance my experience of Lent, and yet so many artists have depicted scenes from the life and Passion of Christ I wonder why I don’t. I take it for granted that art can inspire, that artists portray Jesus, Mary and the saints to make us see them as they see them, to enlarge our understanding of them, to make them real. And yet Lent figures in my mind as a time for withdrawing to a cell, not going to a gallery. But Lent may not only be a fine time but the best time to look at how artists have interpreted Jesus. How they came to a particular work and what they brought to it can be interesting, instructive, meaningful.

Befriending one or more artists, studying their Christian art—whether displayed on a museum wall or reproduced in a book—strikes me as a rich, rewarding Lenten practice, a way to immerse one’s self in both art and faith. Human beings are relational; we learn from dialogue and interaction.

Am I really going to retire to a cave to meditate for hours? No. But I might pick up an art book and be a little better for it.

Timing of this brief article during Holy Week gives pause to reflect on von Balthasar's prescription for contemplation: beauty, goodness, and truth. DC Schindler took up this call in his "The Catholicity of Reason," a tough read for me surely, but in its way a dense invitation to stop and smell the roses. Thank you, Margot Patterson, for reminding me to search for the beauty around me, even if depicted in pictorial renditions of the world's great art and not first hand. The point is to stop, be silent, and look and listen.