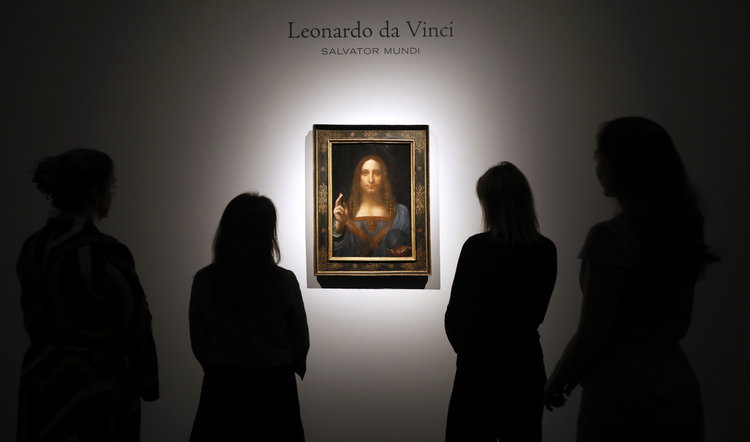 The sale last November at Christie’s Auction House in New York of Leonardo da Vinci’s “Salvator Mundi” for $450.3 million stunned not only the art world but the public at large. The price was many times more than the previous record for a painting sold at auction. Adding to the drama of the occasion, the identity of the winning bidder was for a good while unknown.

The painting, perhaps originally painted for Louis XII of France, had been brought from France to England by Queen Hernrietta Maria and remained in the English royal family through the rule of James II. It was known from a 1650 etching but disappeared in the late 18th century for over a century. Reappearing in 1900 as the work of Bernardini Luini, a prominent Lombard disciple of Leonardo, it was next interpreted as the work of Boltraffio, another Leonardo student, resold in 1958 for £45—and disappeared again.

The steep price tag for the painting “Salvator Mundi” stunned the art world and the public at large.

In 2005 the painting resurfaced, unrecognized, and was sold for under $10,000. Badly over-painted, “aggressively over-cleaned” and with its walnut panel support cracked, the painting was finally restored in 2007 and shown in an exhibition in London in 2011.

What we see now is a full-frontally posed image, measuring 25 ⅞” x 18”, of Christ with his right hand raised in blessing and his left holding a crystal orb. The Savior’s hair falls on either side of his face to just below his shoulders, ending in gold-lighted curls. His eyes are of slightly unequal size and uncertain focus, his nose straight and prominent, his lips closed and relatively small. His chin and light beard fade into his neck above a bare, unmodeled upper chest.

The blessing hand, which immediately recalls the raised hand of the painter’s “Saint John the Baptist” (c. 1500) in the Louvre, and the handsome robe of lapis lazuli blue, with its geometric border, are perhaps the most compelling parts of the painting, although close analysis of the crystal globe (which would actually be far too heavy for anyone to hold in the present pose) reveals the artist’s great attention to the qualities of the crystal.

Prior to the sale, Christie’s pulled out all the stops to market the painting. It hired an outside advertising agency, dubbed the work “the male ‘Mona Lisa’” (playing down its actual religious significance) and trumpeted “the last da Vinci” (only 15 other paintings by him are known). A tour was organized from London to Hong Kong, San Francisco and finally New York, where for several days a pass to see the painting privately was the hottest ticket in town.

Well, this after all was said by a significant number of scholars to be a Leonardo. But not everyone has been convinced of the authenticity and quality of the painting. When it was shown in London, Charles Hope of the Warburg Institute called it “a curiously unimpressive composition.” Carmen Bambach of the Metropolitan Museum of Art, an organizer of the museum’s “Leonardo da Vinci, Master Draftsman” exhibition in 2003, doubts the entire panel is by Leonardo. Personally, I confess to finding the pose stiff, the eyes not mysterious but illegible, and the background deadening rather than elegant. If you happen to know that the “Salvator Mundi” is dated the same year as Albrecht Dürer’s “Self-Portrait in a Fur Coat” (they are reproduced opposite each other in the catalogue), you might well think that there is no comparison in their respective authority.

The larger issue, of course, is that of the marketing and commodification of art today. The question is not new. Patronage has made great art possible from Gaius Maecenas to Cosimo de’ Medici and on to J. P. Morgan and the Rockefellers. When Duncan Philips bought Renoir’s “Luncheon of the Boating Party” for $125,000 in 1923, the price was considered astonishing.

The Metropolitan’s purchase of “Aristotle With a Bust of Homer” for $2.3 million in 1961 was front page news in The New York Times. Leonardo’s “Ginevra de’ Benci” came to the National Gallery of Art, the only painting by the artist in America, for $5 million in 1967. Each of those paintings was acquired, it is important to note, to be shown in a museum. And as a matter of fact, while the “Salvator Mundi” was at first reported to have been purchased by the little-known Saudi Prince Bader bin Abdullah bin Mohammed bin Farhaan, it soon became clear that he was acting on behalf of his friend, the country’s 32-year-old crown prince, Mohammed bin Salman. And it now seems that “Salvator Mundi” is headed for display at the newly opened Louvre Abu Dhabi.

The “last da Vinci” was a prime target, artfully teed up.

The current problem is that billionaire collectors from China, Russia and the Middle East have been driving prices ever higher, especially for contemporary art, not for museum collections principally but often as investments soon to be traded for still another “masterpiece” and attention-grabber. It is hard to imagine any effective regulation of the practice in a capitalist society, however socially-minded. The “last da Vinci” was a prime target, artfully teed up. Its sale recalls A. Richard Turner’s comment, in his landmark book Inventing Leonardo, that “there is a 1550 Leonardo, an 1800 one, an 1850 one, and so on…. Each is a different character based on the needs of the given time that produced him, and each has ties to the Leonardo that went before.” And this seems the time of plutocracy—and equally alarming poverty.

What has happened in the art market is analogous to the history of many religions, in which the early illumination of founders gives way to superstition and the fundamentalist claims of autocratic authority. Grace yields to customary practice, sacramental vision to academic argument and community enlightenment to intellectual fashion. The divine becomes the dollar, and Andy Warhol is reverently quoted: “Being good in business is the most fascinating kind of art. Making money is art and working is art and good business is the best art.”

I know of no remedy except for the continuing education of children, their parents and indeed all of us in learning truly to see. And I know of few mentors more helpful to that task than Joseph Conrad, who memorably wrote: “and if the [artist’s] conscience is clear, his answer to those who in the fullness of a wisdom which looks for immediate profit, demand specifically to be edified, consoled, amused; who demand to be promptly improved, or encouraged, or frightened, or shocked or charmed, must run thus: My task which I am trying to achieve is, by the power of the written word, to make you hear, to make you feel—it is, before all, to make you see. That—and no more, and it is everything.”

Leo J. O’Donovan, S.J., is president emeritus of Georgetown University and and director of mission at Jesuit Refugee Service/USA.

We are in a gilded age where religions have lost their spirituality and preach the gospel of prosperity. Alleged Christians condemn immigrants, forgetting their own history, while Catholics have become WASPS and the First Estate claims privilege rather than crucifixion. The Jesus "sell" is still the same. "Esurientis implevit bonus et divites dimissit inanes." The hungry will be filled with good things while the rich will go away empty. Oh the poison of the Magnificat!

Thus it has been since the first priest mounted an ambo and asked for funds. I am not sure why anyone expects it to be different. We have put a price tag on everything.

Originally Jesus sold for 30 pieces of silver (estimated value $200-600). Now perhaps we should rejoice to see the commercial market placing a much higher value on what is only an image of Our Lord. And we are reminded that Muslims have always had a great respect for Jesus. I see progress here.