Santa Fe: a powerful metaphor for the Latino church in the United States

Santa Fe: a powerful metaphor for the Latino church in the United States 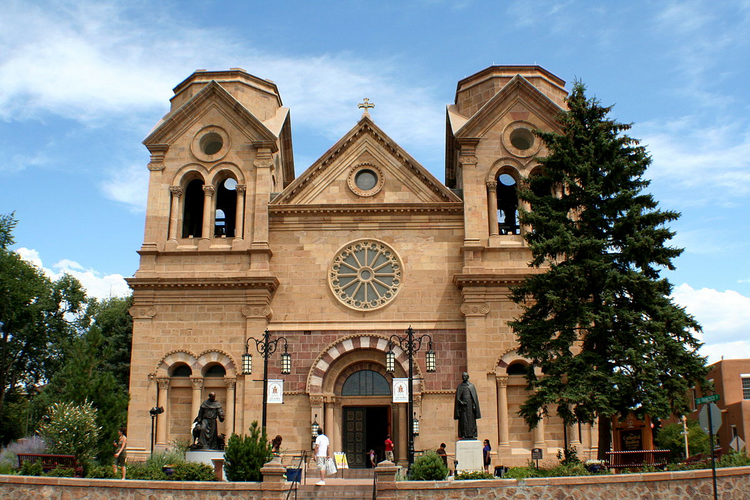 Facade of the Cathedral of St. Francis in Santa Fe, New Mexico (image via Wiki Commons)

While enjoying my first visit to Santa Fe, N.M., I sat on a balcony with a view of the central plaza. From that vantage point I could barely see the towers of the Cathedral Basilica of St. Francis of Assisi. The original church, completed in 1610, had stood on that same spot. It was destroyed and rebuilt several times but the location had never been moved. The Palace of the Governors was across the plaza, also on the same spot it had stood since 1610. Yet there was no clear line of sight between the two. Over the years, commercial buildings had obstructed their connection through the plaza, which had grown smaller and no longer facilitated movement and connections. This was not how a traditional Latin American town would have appeared. If everything else had been preserved in its original spot, what had happened here?

Santa Fe is perhaps one of the best-preserved Latin American towns in what is now the United States, and this prompted my questions. Latin American towns, like their exemplars in Spain, reflect in their organization the way the inhabitants lived together as a people. The buildings and streets were ordered to serve the way the community functioned as a community. The original pueblo, set up over 400 years ago, would have been planned with the plaza at the center, the church bordering it on one side, and the government buildings on another. The church was the center of the community’s meaning-making. Here, the rites of passage of human life were marked and ritualized, and the feast days brought alive in the way Catholic tradition orders the year and celebrates biblical and historical milestones. The church was the place where the “Why?” of life was asked, where joy and grief were provided a tangible space to dwell, and where moral discernment nurtured.

Santa Fe is perhaps one of the best-preserved Latin American towns in what is now the United States.

At the other end of the plaza were the government buildings; this is where the questions of the “How?” of communal life were negotiated. At this spot, limits and possibilities were explored, with the hope that these would provide ways to live peacefully and flourish. Ideally, the moral guidance that happened at one end of the plaza would be incarnated in the laws passed at the other end. Between these two buildings was the plaza. Elaborate or simple, the plaza would serve as the connecting space between the “why” of a meaningful life and the “how” of political realities. The plaza was the location for lo cotidiano, the daily living of the small details of finite human time. Here the elderly would meet and reminisce, the young could catch a first glimpse of a future beloved, new parents could introduce their children, and the stories of the town’s life could be shared and debated. Ideally, the plaza connected the generations and helped provide the physical place and time to be community.

As I asked questions at the various museums in Santa Fe, I found out that with the arrival of merchants from the Eastern United States, a large section of the original plaza was plowed under and commercial buildings put in between it and the church. As I contemplated what had happened to Santa Fe, it became a powerful metaphor for Latino/a life in the United States. Like in Santa Fe, there is much that has been built up and obstructs the connections and ways we used to live with one another. Although much more palpable in the U.S. context, where our languages, religiosity and customs were/are often derided and excluded, Latin America has also experienced the alienation and destruction of community brought about by commercialism and the internal migrations caused by economic necessity. The place where life was negotiated by linking practical questions with a robust ethic grounded in an understanding of God’s presence permeating all things is now mostly gone, replaced by commercial malls and global media.

The plaza was the location for lo cotidiano, the daily living of the small details of finite human time.

Today’s media phenomena seem to fulfill cultural theorist Marshall McLuhan’s prediction in the 1960s that the world was becoming “a global village.” McLuhan compared electronic media to literary media, arguing that for centuries books had promoted individualism, whereas radio, television and film were “re-tribalizing” humanity. For him “the tribe” was now global and the new media was forcing a welcomed retreat away from individualism. Sadly, that has not been the result. It is not the “medium” (either television or books) that creates or breaks down community. It is how we use that medium.

In the plaza of early Santa Fe, we can well imagine conversations about shared stories in books, which provided common threads, awakened questions and nourished engrossing debates. From the 21st century, we can also see that media, now broadly construed as all kind of electronically generated material available on any of multiple screens, can reinforce isolation, emphasize individuality or, as we often hear, create “echo chambers.” Thus, the global village McLuhan announced is not dependent on our ability to “know” about others in the world, but more precisely on being enticed to actually care about those others. There is great potential for global media—it can knit communities together as we learn about each other’s uniqueness—but it also has a dark side. Because we no longer share physical place, the town liar, who everyone knew to be lying, is now unknown to us. Indistinguishable from anyone else, he can present himself as the wise man or leader. Without a close-knit community to link the how and why of life in concrete experience, the liar manipulates what we know to make himself the hero, the lies are believed, and the consequences go unexamined.

Like the plaza of old, the globalization of media can either foster the formation of communities involved in asking vital questions about meaning, moral choices and flourishing, or it can be plowed under and devolve into a cacophony of competing interests willing to say anything to gain our trust and our dollars. In the present environment, which follows decades of the cult of the individual and the numbing of our ethical senses with commercialism, can we renew the link between the discernment of human dignity that happens inside our churches and the actions taking place in our city halls and state capitals, and take these to the only plazas we have left—globally accessible media?

If we recover the plaza’s role by using media, we can share our stories globally. This sharing can help us interlace meaningful lives with political realities while foregrounding community, social activism and the common good. In this global plaza, which you are now experiencing, we can celebrate the contributions of each of our particular cultures, interlace our iglesias into our lives and preserve religious ways of being that see beauty in all humans in our embodied concreteness. We can hope that such sharing can evoke conversations about how it is we help each other to imagine again a meaningful communal life as a true global village.

This is an excellent article - thank you. I do wonder whether it is possible to have a global village by using media. So much that is visible in an actual village is edited out in media. We often see liars because we see how they behave when they think they are not being watched or when they think their actions are unimportant. It is one thing to talk about treating everyone with respect when standing in a church, but the depth of that belief will be shown by how the person treats children, wait staff, or the homeless. When we look at people in front of us, we see them in three dimensions. Media is only capable of two dimensions.