What makes a good ghost story? A conversation with director David Lowery

What makes a good ghost story? A conversation with director David Lowery 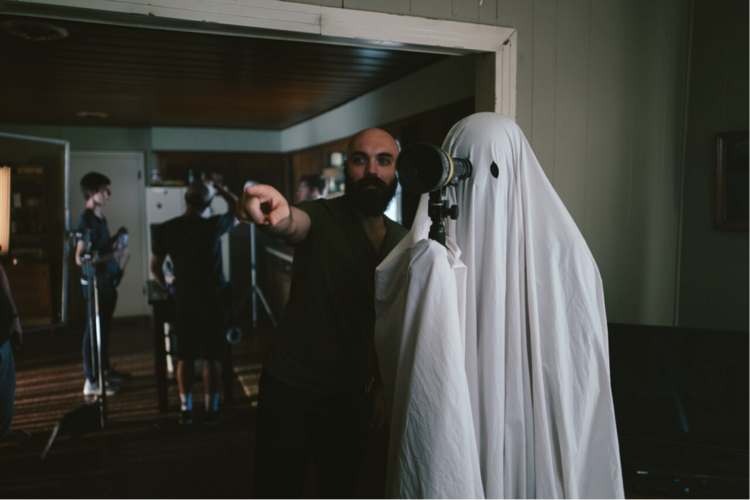 Photo: Bret Curry courtesy of A24

David Lowery is a Dallas-based filmmaker and the director of “A Ghost Story,” a film starring Casey Affleck and Rooney Mara that was released on July 7. Lowery is best known for the live-action Disney movie “Pete’s Dragon” (2017) and for the critically acclaimed “Ain’t Them Bodies Saints” (2013). Raised Catholic, Mr. Lowery is the son of a theology professor at the University of Dallas.

On July 12, I interviewed Mr. Lowery by telephone about the spirituality of ghost stories. The following transcript of our conversation has been edited for style and length.

“A Ghost Story,” tells the story of a man who tries to reconnect with his wife as a ghost after he dies. What inspired you to make this film?

The image of a bedsheet ghost standing all alone in an empty house was something I was obsessed with. I really wanted to make a film about that image, and I was waiting for the right story to come along. When it did, I did my best to honor that image. But that image was what was there at the beginning, it’s what drove me to tell this story, and it’s an image that made me laugh. One of my earliest responses to it was amusement, but behind that humor there was a lot of melancholy, a lot of sadness and enough emotional heft that I could really dig into.

I find the movie very comforting, and insomuch as it’s meant to be comforting, it’s also hopeful. So I hope people come away feeling somewhat optimistic about their lives and their place in the universe.

Ghost stories are a distinctively Christian genre, having arisen from the belief in purgatory, the idea that the souls of the departed have “unfinished business” to settle before they can rest in God. Where do you see Christian spirituality in the story of this movie?

It’s in there exactly as you’ve described. I was raised in a very religious household, and purgatory was a concept I was raised to understand in a very thorough way as a gray hinterland between heaven and hell, which many of us might need to pass through before we can ultimately move on to the afterlife. So even if I wasn’t consciously thinking about that when I was writing the story, that definitely played into what the movie’s about.

The image of a bedsheet ghost standing all alone in an empty house was something I was obsessed with.

I wanted to be careful to not be very prescriptive in this film. There are no ideas about the afterlife that are meant to be taken literally, nor am I trying to impose my own beliefs on the audience. But I do believe there’s room in this story for anyone who’s watching it to bring their own beliefs to the table and engage with it fully in concert with that faith—whatever that faith may be. And I think the movie supports that kind of engagement even if it doesn’t apply itself to any one particular religion.

What’s the value in continuing to tell ghost stories today?

With the transcendent or supernatural, they help us contextualize our own lives while we are here on this earth. On a narrative level, as a storyteller, they are a wonderful tool and technique by which to explore those hopes, those fears, those existential dilemmas that we all face from time to time. And they really can help explain things that are hard to define when you’re limiting yourself to the concerns of the living.

As someone who grew up Catholic, you mentioned you are rooted in a traditional belief system. How would you say those beliefs impacted the way you approached this material?

They didn’t impact them directly in any quantifiable fashion. But there’s no denying that they did because that’s just who I am—the saying goes “once a Catholic, always a Catholic.” I no longer see myself as a devout Catholic in any shape, way or form. Nonetheless, that’s part of who I am because that’s the way I was raised—and I know that has an impact on what I do, the way I tell stories and the values that I hold to be true.

While I didn’t think about [these beliefs] in particular when I was making this movie, this movie deals with concepts that have a tight intersection with matters of faith. But I know those undercurrents are there whether I try to put them there or not.

With the transcendent or supernatural, they help us contextualize our own lives while we are here on this earth.

The most obvious stylistic decision made in this film might be that the ghost, played by Casey Affleck, wears a white sheet with eyeholes, a pretty standard depiction. Can you say more about how this image speaks to you?

I love the complexity of that image and how that complexity is buried beneath the simplest thought imaginable. When you see someone wearing a bedsheet with two eyes cut out of it, you immediately understand that to be a representation of a ghost. Yet you normally don’t apply the actual definition of a ghost to that understanding. You look at that and think about Halloween culture—you think about the Charlie Brown Halloween special or “E.T.” or “Beetlejuice” or John Carpenter’s “Halloween.” You don’t think about that ghost as a person who has passed away and cannot move on to the next life because he or she has earthly concerns to deal with. I wanted to take that image and apply some gravitas and pathos to what’s normally a childlike and “goofy” depiction of a spirit.

You mentioned that you were raised Catholic but no longer practice. What did you take away from that upbringing?

A great sense of morality was instilled in me through my upbringing in the Catholic faith—particularly because my father is a moral theologian. And morality is something I believe exists separate from faith, as an intrinsic human quality that one should aspire to understand and participate in. I also believe that grace is something one can aspire to without applying it to any particular religion. I think it’s something one should look for in one’s life; it’s a mode in which we can operate even if we don’t believe in the traditional vehicle for grace, which is something more divine. I try to live my life with grace and through grace even though I don’t particularly believe in the divine—and that’s a direct result of my having been raised Catholic.

I still look at Catholicism with respect and affection. And I don’t mean that in a demeaning sense; I still have friends and family who are deeply Catholic, and I’m glad that it means what it means to them. But I don’t miss it—I don’t wish that it meant the same thing to me anymore.

The Exorcist's Apprentice: What do horror films say about God?

From Kevin Smith’s “Dogma” to Martin Scorsese’s “Silence,” many directors have made very personal movies about their childhood Catholic faith. If you could make your own movie about Catholicism, what would it look like?

I might try to adapt a Graham Greene novel—I’ve always loved his literature and the way in which he deals with his own questions and crises of faith. You know, I could see the world needing a new adaptation of The Power and the Glory or something like that, so maybe that’s the form it would take.

But to be honest, I don’t know—it’s not something I’ve sought to deal with in my cinema as of yet. Perhaps someday I will on a very explicit level. I really love what Scorsese did with “Silence.” That’s a movie that, had he not made it, I might have wanted one day to make myself. And I love and admire that movie to no end, but I don’t have my version of it yet.

I always feel that my movies speak for themselves, and I love talking about them in interviews because it illuminates things for me that I didn’t even think about. To that extent, I wasn’t thinking about the spiritual side of the movie when I was making it, but having this conversation has really reminded me of the importance of that side of the story—the weight that it holds in the story. So I just want to say thank you for engaging the movie on such a deep level and helping me come to a better understanding of what I’ve made.