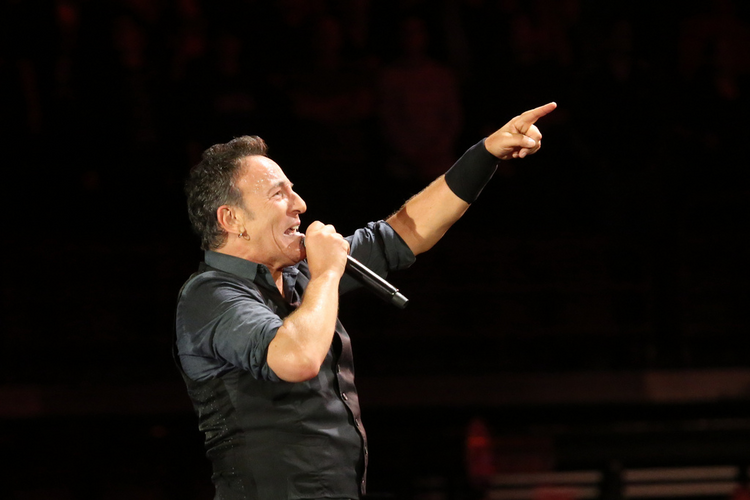 Helpless Catholic that I am, I have a confession to make. I am a Bruce Springsteen devotee. Bruce’s music is the soundtrack of my life. I run with him every morning—or, rather, he runs with me—“Thunder Road” at the top of my playlist, and by the time I hit my stride we’re both being swept along the banks of the Bronx River by “Born to Run.” An hour later when I get in my car, my CD player cues up disc one of “The River,” the album featured in Springsteen’s recent string of concerts—which are not really concerts at all but liturgies, ritual celebrations of the power of poetry and music to speak our desire and despair, our loves and hatreds, our plentiful sins and longings for grace.

In a legendary concert in Madison Square Garden recorded in 2000, Bruce introduces the members of the E Street Band in a televangelical tour de force testifying to the essential role his bandmates have played through the decades as they’ve carried out their ministry of rock and roll.

So, yes, I confess. And as a faithful devotee, when I heard that Bruce’s autobiography, Born to Run, was finally being released after seven years in the making, I ordered it on Amazon and waited. (Sadly, I did not join the line of fellow fans in Freehold, N.J., for the Boss’s book launch for I had to teach that day, and even I have limits.) When the book arrived, I pushed everything off my desk onto the floor, sat down and read all 528 pages.

Truth be told, I learned nothing new. Bruce’s songs have long been telling his story. But his plain prose makes explicit facts only implicit in his poetry.

One of the truths Bruce lays claim to is his Catholic identity and the key role faith has played in his art. Speaking of the church next door to his house, St. Rose of Lima, where his family attended Mass and where he endured school (having his knuckles classically rapped), he writes, This was the world where I found the beginnings of my song. In Catholicism, there existed the poetry, danger and darkness that reflected my imagination and my inner self. I found a land of great and harsh beauty, of fantastic stories, of unimaginable punishment and infinite reward. It has walked alongside me as a waking dream my whole life.

This admission comes as no surprise, for Bruce’s music is full of Catholic poetry and mythos, the imagery of crosses, saviors, baptisms and trials by fire. His landscapes are haunted by“Darkness on the Edge of Town,” traversed by Adam and his cursed son Cain, signs that we are all pilgrims in a fallen world making our way to The Promised Land.

He proclaims his credo in “Badlands”: I believe in the love/ that you gave me/ I believe in the faith/ that can save me/ I believe in the hope And I pray/ that some day it may raise me. After years of writing lyrics inflected with faith, despite an emphatic rejection of his childhood church, Bruce describes a process of gradual epiphany and his arrival at sudden self-knowledge: I came to ruefully and bemusedly understand that once you’re a Catholic, you’re always a Catholic. So I stopped kidding myself. I know somewhere deep inside I’m still on the team.

Over the years, Bruce has hinted at this recognition. In an interview with the nephew of the Catholic writer Walker Percy, he confesses (again, that Catholic word) his discovery of Flannery O’Connor and describes what compels him in her fiction: She got to the heart of some part of meanness that she never spelled out. It was at the core of every one of her stories—the way that she’d left that hole there, that hole that’s inside of everybody. There was some dark thing—a component of spirituality—that I sensed in her stories, and that set me off exploring characters of my own. She knew original sin—she knew how to give it the flesh of the story.

O’Connor and Springsteen share a common vocation—bearing witness to our darkness and making it incarnate in art. They also share a devotion to redemption, our need for grace and mercy to offset that darkness. This grace comes in many forms—the promise of an engine beneath a dirty hood, wheels that spirit young lovers away, a ride to the river where they dive into its healing waters.

The not-so-big Catholic secret is that all Bruce’s songs are redemption songs and tell the same story—the only story—of the saving power of love. For Springsteen fans, that’s old news. For all of us, it’s Good News.

Angela Alaimo O’Donnell is a writer, professor and associate director of the Curran Center for American Catholic Studies at Fordham University.

@aodonnellangela
Show Comments (
3
)
Comments are automatically closed two weeks after an article's initial publication. See our comments policy for more.
John Roach
4 years 8 months ago
You might be interested in the following information. An article from February 6, 1988 in America Magazine titled "The Catholic Imagination of Bruce Springsteen" by Fr. Andrew M. Greeley was a noted sociologist and novelist and frequent contributor to America.
Joseph Curtin
4 years 8 months ago
I recall an article in Commonweal back in the 70s describing his music as catholic (with a small c).
William Rydberg
4 years 8 months ago
Does he still go to Church on Sunday? Catholicism isn't just one cultural "thing" but rather a community/personal encounter with Jesus-God come in the flesh. And yes, Catholicism, is Universal but it's differently manifested in different cultures. We in North America can at times be too Euro-centric in my opinion. Assuming that by being a cultural Catholic substitutes for the Real... I would shudder to think that the sole reason why I am Catholic is because my late mother was of Irish descent. Jesus is Lord... God's Grace playing no part? Inconcievable... in Christ,