These plays remind us that #BlackLivesMatter is more than a hashtag. 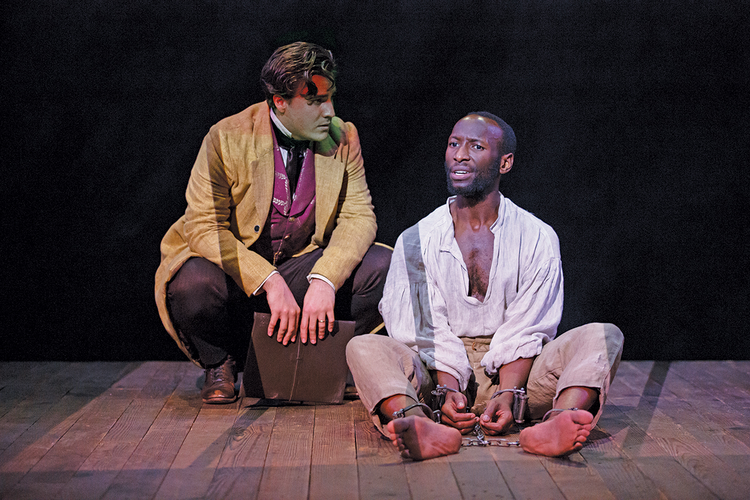 The gulf between African-American church traditions and those of the white, Christian majority in the United States often is more than a mere difference in style or denominational nomenclature. The distinction can run deep, and to understand why we need look no further than the fact that these distinct racial traditions exist at all within an allegedly universal faith. For if the Bible can be read as a story of deliverance from bondage—first the historical rescue of a chosen people, then the supernatural salvation of all—it stands to reason that a historically enslaved people might hear that message with considerably more immediacy, and certainly different implications, than would their historic enslavers.

James Baldwin once noted, “The hymns, the texts and the most favored legends of the devout Negro are all Old Testament,” and their preachers’ sermons were “thinly coated with spirituality but designed mainly to illustrate the injustice of the white American and anticipate his certain and long overdue punishment.” Two recent Off-Broadway plays reflect a bit of this sentiment through two contrasting strains of black Christianity in America—roughly speaking, joy and vengeance. In Marie and Rosetta at the Atlantic Theatre Company, the playwright George Brant gave us the equivalent of staged album liner notes for a knockout, greatest-hits collection of songs by Sister Rosetta Tharpe, a seminal gospel star of the 1940s. And in the often compelling new play Nat Turner in Jerusalem, at New York Theatre Workshop, the playwright Nathan Alan Davis teased out the troubling ambiguities of a religious symbol even white Americans often reflexively invoke in relation to the history of Africans in America: the Exodus story.

“Marie and Rosetta” follows a familiar biographical template, staging a faux-rehearsal between Tharpe, a seasoned veteran, and a young singer she is trying out before a gig, Marie Knight. The two women spar lightly over men, music and religion, but Brant’s play is bigger on information than insight; the purported conflict between saintly and sinful music, gospel and crossover, is less than arresting, not least because Knight, the ostensible goody two-shoes, does not put up much of a fight. And how can she? The pull of Tharpe’s rocking beat is just too strong.

The whole reason for the production, and its saving grace, was the chance to watch the extraordinary actor/singers Kecia Lewis and Rebecca Naomi Jones tear through several room-shaking gospel numbers, both separately and together. It was especially invigorating to witness Lewis’s inspired performance as Tharpe, as she perfectly embodied the singer’s formidable blend of jocularity and profundity and crucially also seemed to play a mean electric guitar (in fact, there were musicians backstage seamlessly providing all the show’s instrumental accompaniment). Tharpe’s finger-picking style and blues-bark vocals, which predated rock and roll by nearly a decade and helped create the template for its sound, inarguably deserve wider recognition, not only because she left behind some gems (her best known recordings are “Up Above My Head” and “Strange Things Happening Every Day”) but because the incongruous image she presented—a church lady slinging a Gibson—is as unlikely and as exultant a juxtaposition as this country has produced. If Brant’s play makes her more widely known—or, more likely, inspires a film version—so much the better.

Brant shows little interest in the lyrical content of Tharpe’s repertoire, though, or what a song like the old spiritual “Didn’t It Rain,” or the lyric “I really do believe/ There’s a heaven somewhere,” might mean to black Americans. Davis’s “Nat Turner in Jerusalem,” on the other hand, takes the content of his title character’s religious thinking with deadly earnestness. Turner’s bloody slave revolt in 1831—an oft-retold story that provides the subject of William Styron’s novel The Confessions of Nat Turner (1967) and of the upcoming film “Birth of a Nation”—has always had an unsettling air of the prophetic about it, particularly viewed in retrospect. Turner apparently believed he had been led by divine portents to enact God’s judgment on slaveholding whites, to be both their Moses and their plagues. He and his co-conspirators managed to kill 55 men, women and children before they were apprehended and a disproportionate retribution was unleashed.

Davis imagines Turner in jail on the eve of his execution, in alternating conversations with God, a prison guard and Thomas Gray, the white lawyer to whom he dictated his famous confessions. At one point, he has Turner (played with bone-deep conviction by Philip James Brannon) enunciate a chilling virtual prediction, not only of the coming cataclysm of the Civil War but of a nation haunted, as ours still is, by racial injustice and doomed to fall to God’s judgment, like Egypt and Rome before us, unless we repent.

Though Davis’s play has its stodgy, historical-fiction elements—the double casting of Turner’s two white interlocutors with the same actor, Rowan Vickers, led to some cumbersome scene changes—he also does something sneakily profound by making Gray an atheist. This white questioner thus does not see Turner’s messianic visions as perversions of their common Christian faith; indeed, by declaring himself neutral on the moral or spiritual dimensions of slavery, he implicitly challenges the entire biblically informed mythology of bondage and redemption that has underpinned American thinking, black and white, about our nation’s history of slavery, abolition and the Civil Rights era.

If we take the Exodus analogy more literally, of course, it should end with white Americans drowned in the Red Sea. In a powerful passage in Davis’s play, Turner counsels his jailer to leave Virginia before the impending judgment. Where should he go, the jailer wonders. Turner tells him to take himself and his family “due east,” as far as the ocean and beyond, and to see if they can walk on water. Anything less than a kind of full-immersion abasement, a dying to one’s old self, he seems to be saying, will not be enough to cleanse the nation’s sins.

If the promise of the New Testament (and just possibly America) is that we might transcend our thorniest divisions or the things that divide us, it will take gestures no less dramatic. It will require the phrase “Black Lives Matter” to be more than a hashtag but instead to form the chapter heading for a long overdue narrative of true, earthly repentance—a reckoning beyond metaphor, in which we face each other as human beings locked in struggle on this blood-stained soil, marked by sin, unworthy of forgiveness but unable to move forward without it. A little joyful noise probably would not hurt either.