After Alice: The emergence of a new kind of Catholic novel 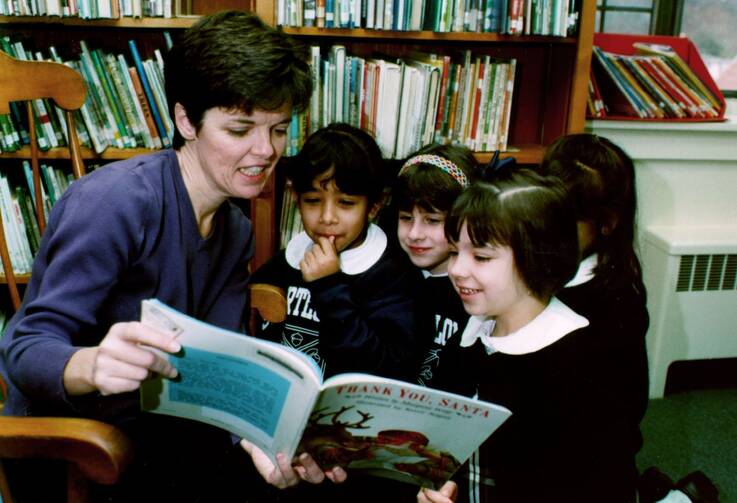 Novelist Alice McDermott, winner of the National Book Award for 1998, shares a story with, from left, Nadia Qassam, Meredith Cahill and Katie Knapp, all first-graders from St. Bartholomew School in Bethesda. McDermott has served as a volunteer librarian at the school. (CNS photo by Michael Hoyt, Catholic Standard) (Dec. 18, 1998)

Having read Alice McDermott’s six novels, I suspect she may be a closet transcendental Thomist!

Over the last seventeen years, as the coordinator of an adult education course on the Catholic novel, I have made my way through 130 works of Catholic fiction. In choosing the novels I have used the following definition as my criterion: A Catholic novel is one whose theme is based on some Catholic dogma, moral teaching or sacramental principle, and in which the mystery of the church is treated favorably. The description has proven broad enough to encompass novels by both Catholics and non-Catholics, stories of both saints and sinners, of mystics and murderers. Having read so many Catholic novels, I have discovered that even in those written by Catholics there are many different ways of depicting God’s presence.

In McDermott’s world God could never be described as an outsider or an intruder.

Recalling the great Catholic novelists of the 20th century—giants like Graham Greene, Evelyn Waugh, Francois Mauriac and Flannery O’Connor—it is striking how their image of the divine differs from the God found in Alice McDermott’s novels. At the risk of oversimplifying, the God who appears in the novels of Greene, Waugh, Mauriac and O’Connor is the Transcendent Other, entering, sometimes suddenly, into the lives of the characters in the story. In those novels Francis Thompson’s image of God as “The Hound of Heaven” is powerfully portrayed. The image is of God pursuing the sinner, and when an encounter between the novel’s protagonist and God takes place, it is depicted very dramatically, even miraculously.

Greene brilliantly depicts what some critics have tagged “Greeneland,” a dark, sleazy place populated by unattractive people in flight, sometimes physical, sometimes spiritual, often both. The presence of God in The Power and the Glory leads a “whiskey priest” who has fathered a child to die a martyr. In The End of the Affair a promiscuous wife encounters God through a miracle and becomes a saint whose intercession from beyond the grave leads to more miracles. The intervention of God in Evelyn Waugh’s Brideshead Revisited is no less dramatic. At the novel’s climax, the sacrament of anointing brings about a deeply moving death-bed conversion, which in turn leads to two more life-changing conversions. So powerful is the Transcendent Other in Mauriac’s Vipers’ Tangle that Louis, the main character, seems to be literally overcome by God’s grace, suggesting that Mauriac was influenced by the Jansenist heresy that claimed the gift of grace removed human freedom. In her novels Wise Blood and The Violent Bear It Away, Flannery O’Connor uses the abnormal and grotesque to indicate the presence of grace. A self-mutilation and a murder by drowning become signs of encounters with God.

In her study The Vital Tradition: The Catholic Novel in a Period of Convergence, Jean Kellogg argued persuasively that the Catholic novel flourished when the church adopted a confrontational stance toward modern culture. With the advent of Vatican II and the church’s entrance into the modern world, Kellogg suggested, the conflict that had nourished Catholic creativity disappeared, and with it the Catholic novel. Yet while the 1960s and 1970s did see the decline of a certain kind of Catholic novel favored by Greene and company, with Alice McDermott, and perhaps others, something new and different has appeared.

To read The Power and the Glory and The End of the Affair in tandem with McDermott’s Charming Billy and After This is to be struck not only by how profoundly Catholic each novel is, but also by the different lenses through which each author presents the mystery of God. In McDermott’s world God could never be described as an outsider or an intruder. If poet Francis Thompson’s “The Hound of Heaven” illuminates Greene’s work then poet Gerard Manley Hopkins’ insight “The world is charged with the grandeur of God” illuminates McDermott’s. She sees creation as sacramental, and within this sacramental world grace works ever so subtly.

In McDermott’s novels God is the horizon toward which the characters are oriented, the atmosphere that surrounds them, the love in which they exist and move and have their being.

And here is where McDermott’s transcendental Thomism comes in. Represented by Karl Rahner, S.J., among others, this theological school argues that God is fundamental to the essence of a human being. To study either God or man in depth is also to study the other. In their consciousness and in their will human beings are oriented toward God. Human persons and God are distinct (transcendental Thomism is not pantheism!) but not separable. All human experience involves God.

In McDermott’s novels God is the horizon toward which the characters are oriented, the atmosphere that surrounds them, the love in which they exist and move and have their being. Because God is present in every human experience, even sin, it is easy to overlook that presence. I had strange experiences reading Charming Billy and After This. The title character of Charming Billy is a lovable but hopeless alcoholic. At one point in the novel a character describes Billy as holy. I confess that would not have been the first adjective that I would have used to describe him. Billy has no death-bed conversion and he never conquers his alcoholism. Yet by the time I finished his story set in the divine milieu in which McDermott’s characters exist, I suspected that Billy was very holy.

The first time I read After This I found almost nothing in it Catholic and did not understand even the title. Re-reading it I discovered a great Catholic novel! In it a young man, who thinks he has disentangled himself from everything Catholic from his background, is surprised that he recalls the words of the Salve Regina from which the novel gets its title:

Turn then, most gracious advocate, thine eyes of mercy toward us, and after this our exile, show unto us the blessed fruit of thy womb…

Reading the novel for the first time, I missed the omnipresence of a loving God who pervades the lives of the characters, but is invisible except to the eyes of faith. The two words from the Salve Regina sum up that the very presence of God, unseen and perceived only "through a glass darkly," makes the characters' lives on earth an "exile."

McDermott has spoken and written about how learning to write led to a deepening of her Catholic faith:

I had come to see that the life of Christ, the Son of God whose death redeemed our lives, redeemed from absurdity our love for one another, made of our existence a perfect, artistic whole that satisfied, in a way that great art could only briefly satisfy, our hearts’ persistent insatiable need for meaning, for redemption.

The Catholic horizon of Alice McDermott’s novels gives profound meaning to her insightful and joyful attention to humanity.

Rev. Robert E. Lauder is professor of philosophy at St. John’s University in New York, and is the author of

A really fine insight into  McDermott's novels. I too teach philosophy courses.......what  Father Lauder writes is so true! It really resonates!

".....And here is where McDermott’s transcendental Thomism comes in. Represented by Karl Rahner, S.J., among others, this theological school argues that God is fundamental to the essence of a human being. To study either God or man in depth is also to study the other. In their consciousness and in their will human beings are oriented toward God. Human persons and God are distinct (transcendental Thomism is not pantheism!) but not separable. All human experience involves God.....

It was a pleasure to read Fr. Lauder's review of  "After Alice".  His confession of reading the book twice to identify the true spirituality in Alice McDermott's writing was refreshing. After just reading "My Life with the Saints" by James Martin,S.J. I intend to read "After Alice".  Also, may I say, I had the pleasure of taking a course with Fr. Lauder.