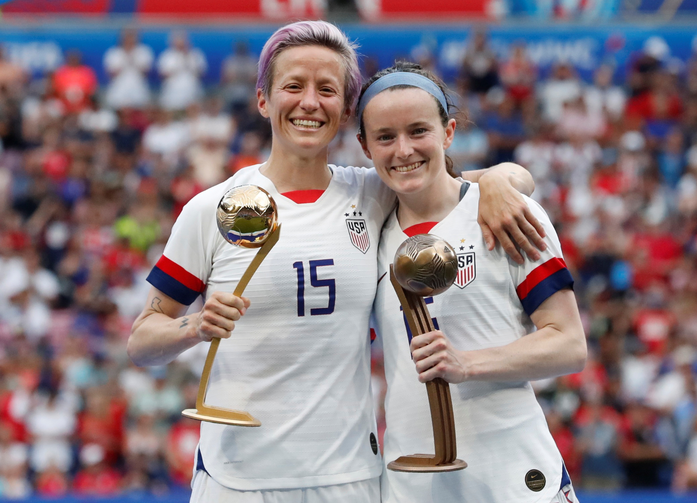 Rose Lavelle skyrocketed from a star player, loping across the soccer fields at her Catholic girls high school in Cincinnati, to a superstar, scoring three goals for the U.S. women’s team at the World Cup and winning the Bronze Ball as the third-best player in the tournament.

Her high school, Mount Notre Dame, spent the days before the final excitedly cheering her on via Twitter, and it hosted a school-wide viewing party for the 2013 alumna’s game against Thailand June 11. They tweeted in support before the semifinal July 2 against England:

Good Luck to @roselavelle '13 and the Team USA today in the World Cup semifinals! #GoRosehttps://t.co/lrGQgTbsRl

Lavelle’s high school, Mount Notre Dame, spent the days before the final excitedly cheering her on via Twitter.

On July 7, the U.S. won its record fourth FIFA Women’s World Cup title and second in a row, beating the Netherlands 2-0 in Lyon, France. LaVelle scored the second goal.

Even as a young high schooler, Lavelle was dazzling on the field, according to Cincinnati.com. Mount Notre Dame celebrated Lavelle’s high school athletic accomplishments, including her four-year varsity performance, during which she earned First Team Honors, All-State player, and Cincinnati Enquirer Player her senior year.

But her passion for soccer dates back even earlier to her elementary school days. St. Vincent Ferrer School posted this along with a photo of a young Lavelle dressed as former superstar Mia Hamm:

So cool to see her empower the next generation of women 👏🏼 pic.twitter.com/KhXXvOXdI3

Hamm was a forward for the U.S. women's national soccer team from 1987 to 2004. Now retired from soccer, she is a two-time FIFA Women’s World Cup champion and a two-time Olympic gold medalist.

After Lavelle and her U.S. teammates won in their final 2-0 game against the Netherlands, Mount Notre Dame celebrated in a Facebook post: “She’s always been a star to us! It has been an absolute joy to watch Rose Lavelle ’13 shine in the World Cup. Can't say we are surprised—she was voted Most Athletic her senior year! Congratulations to Rose and Team USA! The MND community couldn't be prouder!”

Did prayer have anything to do with the St. Louis Blues winning the Stanley Cup?
Catholic News Service

After high school, Lavelle went on to play for the University of Wisconsin, playing for the Seattle Sounders summer league team during her time off from school. That’s where she was discovered by coach Jill Ellis, who stood by her during her 2017 hamstring injury, allowing her to blossom into a successful FIFA superstar.

After watching the final with bated breath, Lavelle’s hometown alma mater tweeted a joyful tribute to its local celebrity: “Congratulations @USWNT! Couldn't be prouder of our very own @roselavelle! #FIFAWWC19.”

Correction July 8: An earlier version of this story incorrectly stated the score and opponent of yesterday’s final in the seventh paragraph.

I suppose this is better than the headlines "Lesbians win World Cup" and co-captain curses about visiting the Trump White House. There will always be someone in the role of the Ugly American.

Alan Johnstone---
I don't think you need to worry about such a headline. Most people do not think that way and would not write a headline about one's sexual orientation when celebrating a team's world victory. Further, it has been common for victorious team members to not want to visit Trump as they disapprove of his life style.

The US Women's team was the most hated-filled and mean-spirited squad in the history of sport. The entire world and >50% of USA was rooting for them to lose, based on their terrible conduct leading up to the final. The outspoken Lesbian with a sexual deviant lifestyle actually tried to claim that women were equal to men. Well, google this: "FC Dallas under-15 boys squad beat the U.S. Women's National Team in a scrimmage" LOL.

Lastly, the cries of "equal pay" are ridiculous as can be seen between the ticket prices between the NBA and WBNA. People in a free country are willing to pay FAR MORE to see the best athletes in the world compete, and they are men, in most cases. So, unless Ms. Rapinoe wants to steal money from men, or men's league, how can she demand price-fixing of ticket prices for global futbol games? She is so stupid, and so filled with hate, she embarrassed the entire American nation.

Well, I guess I’m in the minority, as I rooted for and thoroughly enjoyed watching our extraordinary American women athletes in their march through the 2019 World Cup campaign. They earned the respect of all true sports fans — men and women — for their grit, grace and heart. As the father of two daughters and grandfather of four granddaughters, I was proud to see American women showing the world what accomplished women athletes are capable of.

You are definitely in the minority. Reflect on why you think that way. Are you conscious or unconsciously the type that likes to poke others in the eye? Be a “rebel”? Always have to be against a majority? Rapinoe wasn’t polite or a role model. She modeled hate and bigotry. Insolence and lack of love and no patriotism. She is in a mortally sinful and soul-killing deviant sexual relationship.

What did the US team actually do? What exactly did they show they were capable of??? Somebody had to win the tournament, big deal, so what was out of ordinary ? They lost to 15 year old males in a preparatory game, didn’t you see that? Nothing extraordinary occurred last week. Simple tourney with a standard winner, 2-0. The US women’s team won, but did nothing extra-ordinary except embarrass the United States, an no Catholic should support that or a hateful bigot deviant like Rapinoe. Ugly inside and out. Teach girls to have dignity unlike Rapinoe who is ruled by anger.

Well, I guess I’m in the minority, as I rooted for and thoroughly enjoyed watching our extraordinary American women athletes in their march through the 2019 World Cup campaign. They earned the respect of all true sports fans — men and women — for their grit, grace and heart. As the father of two daughters and grandfather of four granddaughters, I was proud to see American women showing the world what accomplished women athletes are capable of.

Dale Athlon---
I have seen and read nothing but absolute joy over the U. S. Women’s Soccer Team winning its fourth Women’s World Cup title. Being presented with a parade in New York hardly conveys overwhelming opposition to the team.

You seem to have a problem about women that belongs in the 1950s or earlier. You think the women’s team showed terrible conduct? Of course, no male teams has ever disgraced themselves with their behavior before or after a game.

The cheating, straight male, Tom Brady, was suspended for four games for his scandalous role in the deliberate deflation of footballs in the 2015 Super Bowl game. The Super Bowl is one of America’s great sports events and Brady swindled American fans with his fraud.

Brady, a straight male with a sexual deviant lifestyle, had a child out of wedlock while dating his current wife. Brady is a huge fan of Trump. They seem to have much in common.

Dale Athlon--
Here is an article that has a different view than yours about the U. S. team. You might enjoy reading about the thrill of our American team.

ON SOCCER
With No Argument on Substance, Critics Take Aim at U.S.’s Style
https://www.nytimes.com/2019/07/06/sports/soccer/uswnt-world-cup-final.html?action=click&module=RelatedLinks&pgtype=Article

Hearty congratulations. Winning the World Cup is a massive achievement.

When we stop looking the other way when someone is behaving badly, the bad behavior will stop.

Sportsmanship (yes, I used the correct term) was lacking. It was obvious and the coaches knew it and let it go.
Shame on them.