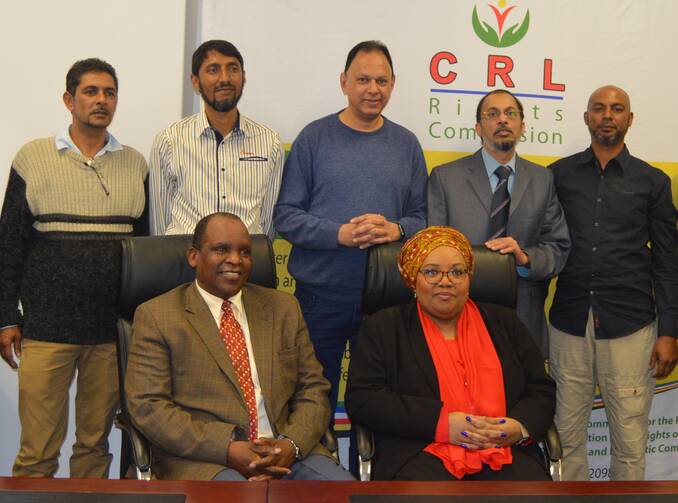 Thoko Mkhwanazi-Xaluva, head of the Commission for the Promotion and Protection of the Rights of Cultural, Religious and Linguistic Communities, seated right, with other CRL members (photo courtesy of CRL)

A proposal to regulate religious practice in South Africa is being criticized as a veiled attempt to thwart criticism of the government. On July 11 the Commission for the Promotion and Protection of the Rights of Cultural, Religious and Linguistic Communities in South Africa issued a report to Parliament recommending that all religious practitioners be registered under umbrella organizations that would be recognized by the state and subject to “peer-review committees.”

The proposed committees would each cover a religion, for example, one for Christians and one for Muslims, and would be responsible for “religious self-regulation and accountability.” The peer-review committees would act as “the final mediator in all disputes within their own religion.” The commission had been asked to review some at times scandalous behavior of some religious leaders who have been accused of endangering and defrauding the members of their congregations.

South Africa’s constitution safeguards freedom of religious association. Critics of the recommendations say they represent a direct violation of that constitutional commitment.

The director of Freedom of Religion South Africa, Michael Swain, said that the organization “is not persuaded that licensing practitioners is the way to go.” He said that government had no business “meddling with religion.”

The director of Freedom of Religion South Africa, Michael Swain, said that the organization “is not persuaded that licensing practitioners is the way to go.” He said that government had no business “meddling with religion.”

F.O.R.S.A. represents about six million people from 227 denominations, churches and other religious groups. Mr. Swain said that F.O.R.S.A. was waiting to make submissions to the parliamentary portfolio committee that will be looking at this report and deciding on the way forward.

South Africa’s bishops came out quickly in opposition to the plan. “We will oppose the recommendation and will make submissions to the appropriate bodies in due course,” said Archbishop Stephen Brislin, president of the Southern African Catholic Bishops’ Conference. “The Catholic bishops of South Africa are concerned about the recommendations of the commission that priests, ministers of religion and pastors will, by law, have to register with government as ‘practitioners,’” he said.

The commission’s recommendations were the result of an investigation into the “Commercialisation of Religion and Abuse of People’s Belief Systems.” The commission was responding to media coverage of congregants being endangered in places of worship. These included reports of religious leaders feeding congregants snakes (claiming that the Scriptures said that believers could take on snakes and remain unharmed) and grass and inviting others to drink paraffin in demonstrations of faith. The commission said that they had found that the death of worshippers who were encouraged to use “faith products” or give up taking their own medication for chronic illnesses was unacceptably high.

The commission recommended that each “religious practitioner” supply a physical location where he or she conducts religious ceremonies upon registration so they could be traced. This could be in a church, homes, mosques, temples, mountains, open fields and tents.

The chairperson of the commission, Thoko Mkhwanazi-Xaluva, said that South Africa’s constitution states that everyone had the right to choose a trade, including becoming a religious minister, but the practice of that trade or occupation must be regulated by law. She said that the aim of the proposal was to “protect congregants.”

Mr. Swain argues that work as a religious minister or practitioner cannot be compared to careers like law, medicine and financial services. “In these instances, there are set laws, regulations, processes and procedures against which conduct can be evaluated and licenses awarded or withdrawn, whereas the area of faith is by definition, fluid and varied.” He said that what the commission identified were abuses, which are criminal acts.

“You cannot hide behind freedom of religion and then commit a criminal act. The law must be enforced,” Mr. Swain said. “The country has laws which dealt with every abuse that the commission had identified.”

Archbishop Brislin agrees. “We fully understand and share [the] government's unhappiness with certain practices done in the name of religion, such as requiring adherents to drink petrol or eat grass,” he said. “However, we believe that there is sufficient existing legislation that can be evoked to deal with most of these harmful practices.

“The recommendation that new laws be introduced to enforce registration of pastors and ministers is overkill and a response that one would expect more from a totalitarian state than a constitutional democracy.”

Mr. Swain argues that the proposal of peer-review committees suggests that the commission, an institution of the state, wants to meddle in religious affairs.

The commission did not investigate why some congregants—often in poverty stricken areas—continued to frequent religious gatherings where fellow congregants were harmed by pastors.

Bishop Abel Gabuza, chair of the S.A.C.B.C’s. Justice and Peace Commission, said that he is concerned by what is happening under the banner of religion. He thinks that some form of oversight is needed to keep an eye on pastors. He said that the bishops will certainly make a submission to Parliament on the matter. Bishop Gabuza added that, personally, he has no problem with churches being asked to provide their constitutions and yearly financial returns to South Africa’s Revenue Service, but other proposals “may be going a bit too far.”

At the heart of this new development is a conflicting understanding of freedom of religion in South Africa. One view sees religious freedom as absolute—even to the point of being above the constitution and laws of the land. Another sees religion as an independent entity subject to normal civil and criminal law. The third view, echoing the approach of countries like China, sees religion as an organ of state. Read against the background of the controversial proposed Hate Speech Bill—seen as an attempt to curtail freedom of expression by its opponents—many fear that calling religious organizations to account for criminal misbehavior may be an attempt to control religious expression at a time when the religious sector is starting once again to confront the state over corruption.