Anti-apartheid veteran asks: What has become of the African National Congress? 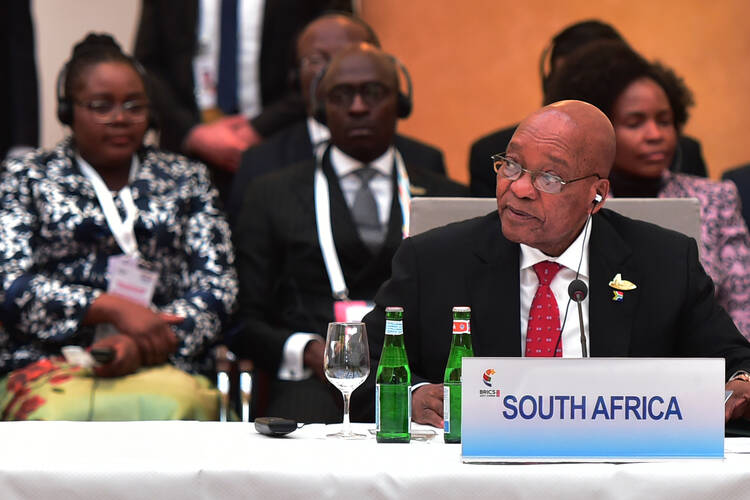 In his simple office in downtown Johannesburg, South Africa’s biggest city, Father Smangaliso Mkhatshwa heads up the Moral Regeneration Movement. The organization, partnering with many others, is a civil-society initiative that seeks to halt declining morals by paying special attention to development, social cohesion and nation building.

Father Mkhatshwa is also a former secretary general of the Southern African Catholic Bishops’ Conference, a former member of Parliament, a former deputy-minister of education under President Nelson Mandela and a former mayor of the City of Pretoria. He was a prominent figure in South Africa’s anti-apartheid movement.

As the African National Congress concluded its policy conference on July 5, Father Mkhatshwa was troubled by the direction the movement is taking. The conference, six months ahead of the A.N.C.’s. national conference in December, was carefully watched as different factions in the party battled it out. “The A.N.C. I joined and fought in was a glorious movement; it is no longer,” Father Mkhatshwa says.

He believes that the A.N.C. is in crisis for two major reasons. First, there is the quality of the leadership, “especially at the top,” which “influences the different layers of leadership on the local level and provincial level.” He is very concerned “about the kind of extreme forms of materialism” that have “engulfed” the A.N.C. leadership.

Second is the challenge of corruption. “People will say that there is corruption all over the world. Yes, I agree, but that is not very helpful. It is of no use saying my father was a drug dealer and therefore I have no option but to be a drug dealer because my father was… We started so well in 1994; everybody all over the world admired us, not just Mandela, but South Africa and the A.N.C.

One of the themes that emerged from A.N.C. conference was party renewal. Father Mkhatshwa is skeptical. He says that the A.N.C. is redeemable, but “they need new people to do it.”

“Ethical values were very much at the center of our conduct and behavior. That’s what I think stimulated so many people to work voluntarily for the movement, to sacrifice their time, energy and talents in bringing about a just and integral society. But I also think we had a lot of integrity during those days, and that’s why people around the world respected us.”

Father Mkhatshwa believes that over the past 10 years—the approximate time of the presidency of the A.N.C.’s leader, Jacob Zuma—there has been a departure from the way the A.N.C. leadership of the past conducted itself. He says that certain arms of government are not acting ethically.

“Take, for instance, the way in which Parliament handled the Nkandla scandal,” he says, referring to Mr. Zuma being found to have used $23 million in public monies on his home in Nkandla in KwaZulu-Natal Province. “The Constitutional Court severely criticized [political leaders] and said that they were there to represent the best interest of the people.” But even this court judgment did not seem to have much impact on the A.N.C’s. leadership—they still stood by Mr. Zuma. “Parliament is there to defend the rights of the people,” Father Mkhatshwa says. “This is not a political but an ethical issue.”

One of the themes that emerged from A.N.C. conference was party renewal. Father Mkhatshwa is skeptical. He says that the A.N.C. is redeemable, but “they need new people to do it. The A.N.C. needs a new kind of cadre who is principled, believes in the common good, democracy and good governance.”

Father Mkhatshwa chuckles as he says that whoever might emerge to build that new leadership will need a “thick skin, guts, a good heart.” Whoever is elected in December at the A.N.C.’s electoral conference must have the good of the country as their priority, he adds. “The people of this country need to be governed so that they can realize their full potential.”

The party, attached to the names of great men like Oliver Tambo, Walter Sisulu and Nelson Mandela, entered its recent conference facing one of the greatest crises in its 105-year history. South Africa recently fell into a technical recession and international credit rating agencies downgraded the country’s bond status to “junk.” Factionalism, corruption, bad leadership and accusations that Mr. Zuma has been “captured” by a powerful and wealthy Indian family, the Guptas, were all part of the hot issues the A.N.C. delegates faced.

At the beginning of the conference, Mr. Zuma offered a lengthy opening address. Ears pricked up, however, when he began to speak off the cuff about the A.N.C.’s veterans.

Veterans of the struggle against apartheid, including Father Mkahtshwa, had asked for a separate consultative conference with the A.N.C. leadership to discuss the state of the party and its current crisis. After initially agreeing to such a gathering, the party’s National Executive Committee withdrew. As a result, the veterans decided that they would boycott the conference.

Mr. Zuma took the opportunity to mock and criticize the party’s veterans of the long military and civil struggle against apartheid. He accused them of going outside of party structures and treating branches on the ground as “riff raff.” He said that veterans who asked for a separate meeting to discuss the troubled state of the A.N.C. made a “funny” move.

He spoke of the need, ironically, for unity in the A.N.C. Some of these veterans were close friends and colleagues of people like Nelson Mandela. It was, therefore, quite astounding to many South Africans that the president would dare speak in such a manner about these respected men and women.

Like a “Teflon man”—or the elephant with the thickest hide in Africa—President Zuma remains unperturbed by the many concerns raised about his corrupt behavior and poor leadership. In less than a month he faces yet another vote of no confidence in South Africa’s Parliament (his seventh). Despite this and the growing public frustration with him, Mr. Zuma spoke confidently at the conference, ridiculing A.N.C. veterans and acting as if nothing were wrong with the state of the party or nation.

Father Mkhatshwa regrets the way President Zuma took aim at A.N.C. veterans. The president’s statements were a “distortion of facts” and “misleading to the nation,” he says.

If Mr. Zuma had been serious about unity, “which is needed now more than ever,” he says, this was his opportunity to forge it. Father Mkhatshwa believes that Mr. Zuma feels threatened; he knows that the veterans still wield influence and that their “moral authority is still accepted” by many. He says the veterans will forge ahead with the consultative conference they called for. “This is not for us, this is about how to save the country.”

Father Mkhatshwa, speaking about the role of the church in South Africa’s current political situation, says that he thinks that the church “took a dive” in 1994 after the election of the first post-apartheid parliament. “After 1994 they went on holiday. They thought that the leaders were free, so they gave out.”

He says that there are signs that the church is beginning to take its rightful place in speaking out against the serious issues that face the country. He thinks, however, that the church’s interventions so far have lacked good analysis of the current problems the country faces. He speaks fondly of South Africa’s great social justice bishop, Denis Hurley. Hurley was Archbishop of Durban from 1951 to 1992. He denounced apartheid as “blasphemy” and “intrinsically evil.

In 1984 the apartheid government charged Hurley with treason for publishing information on the atrocities being committed by the South African military. Father Mkhatshwa says that Hurley “fell back on progressive theologians; contextual theology played a key role back then.” He suggests that this emphasis has been lost; there has been no good theological analysis since 1994.

A victory for democracy and Africa in Gambia
Russell Pollitt, S.J.

It is difficult to say what specifically emerged from the A.N.C’s. policy conference. There were no decisions on how the party will deal with its warring factions or who the next leader might be. There was also no clear and decisive policy-setting on the corruption that plagues the country.

Many issues were referred to the A.N.C. local representatives on the ground in communities, for further discussion. The party did confirm, however, the government’s decision to withdraw from the International Criminal Court. This came just two days before the I.C.C. delivered a scathing judgment against South Africa for not arresting Sudanese President Omar al-Bashir when he traveled to an African Union meeting in the country in 2015. Mr. al-Bashir is accused of genocide and war crimes. Delegates also suggested that the country downgrade its embassy in Israel in solidarity with the Palestinian cause.

However hesitant the A.N.C. behaves as it confronts South Africa’s problems, the internal politics of the party will continue to deeply affect the country and determine its course politically, economically and socially. Father Mkhatshwa believes that the A.N.C.’s electoral conference in December will be very important and “have consequences for a very long time.”

Where are all the people who marched, protested and demanded that something be done about Apartheid ? Why is the dictatorship of Zuma allowed to continue, does he aspire to be like the "Crocodile to the North"
- Mugabe and destroy his own people for the sake of the inhuman wealth of his erstwhile supporters ?

Obviously Archbishop Hurely never met Zuma if he wants to talk about
evil. As for Oliver Tambo, did he not orchestrate the Church Street bombing on 20th of May, 1983, and were not people, wholly innocent people killed in that bombing ?

South Africa may be worse now then when the Afrikaans ruled it, largely in part because the very people who demanded and immediate end to Apartheid did not offer their help when the help was and still is needed the most.