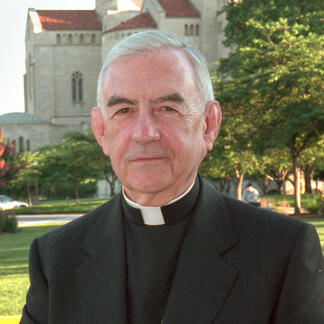 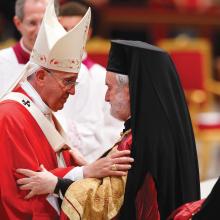 Closer to Communion: What the patriarchates mean for today’s church
John R. QuinnNovember 12, 2014
The fact that before the year A.D. 325, synods were held everywhere in the church demonstrates that the bishops realized, as the author Msgr. Michael Magee put it, that “no bishop was entitled to exercise his office in isolation from the common good of all the Churches, or from his brothers in 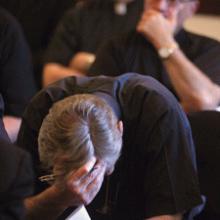 Do Not Despair: Christ is present even in the darkness
John R. QuinnMay 03, 2010

This address was delivered at the National Federation of Priests’ Councils, Houston, Texas, April 13, 2010.

I am here to pay tribute to you, the priests of the United States. You stand on the front line. You meet the angry or confused or troubled people at the Sunday Masses in your parishes and missions. You have to try to answer their questions about the worldwide crisis caused by priests and bishops around the world. You are the ones out there in the parishes whose hearts break at the anguish of our people over the robbed innocence of their children. And you weep inside over the desecration of something so beautiful, so cherished as the priesthood is to all of us. You are the ones who meet the children and the families, and try your best to walk with them in their search for peace and healing. You are there where the wound is.

I know that all over this country, in small towns and large cities, there are priests who stay up all night in a hospital waiting room with a distraught family whose teen-age daughter lies near death from an automobile accident. I know that there are priests in rural dioceses, like the priests I knew in Oklahoma,   who drive  hundreds  of  miles both ways to one or several  mission churches  on Saturday evenings and then  have three Masses on Sundays with baptisms, counseling, youth groups and parish gatherings in the afternoon and  evening. I know that there are priests, like so many articulate and well-read priests I know in San Francisco, whose constant thought is how they can respond better and more effectively to the needs of their people. You are the priests who have persevered when your heart sank over an admired and gifted classmate who was removed from ministry because of allegations of abuse.  You are the men who worked generously and in a spirit of faith to cooperate with and support your bishop even when at times that may be difficult. You are the men who have defended and held on to the church in the face of anger, bitterness and controversy.

You are the men who have seen the parishes and schools and hospitals close and disappear but have resolutely served the people in living faith. You are the priests who, unseen, and unknown to anyone, slip quietly away for an hour of prayer to make intercession for the church and for the world and in that encounter have discovered the only—and the real reason—to persevere. Brothers, you are the priests of the United States, a body of men who do not seek praise or acclaim and who walk faithfully with the Lord in a time of searing and seismic testing.

We are at a critical point in the life of the church. Here and there commentators are beginning to compare it to the magnitude of the crisis of the Reformation. This is not the place to raise these cosmic issues. But I do believe it is the place to raise the question every priest must confront today. It is the question first raised by the Jesuit Karl Rahner: “Why would a modern man want to become or remain a priest today?”

This great theologian tackles the question with stunning simplicity. He begins be saying that for him, it is not the great works of the church in the service of justice and peace, the great universities and the great movements and programs. “Rather,” he says, “I still see around me living in many of my brother priests a readiness for unselfish service carried out quietly, a readiness for prayer, for abandonment to the incomprehensibility of God, for the calm acceptance of death in whatever form it may come, for the total dedication to the following of Christ crucified.” Then this great scholar mentions those who inspire him to persevere as a priest:

But there are men like these who have lived in and come from our own American dioceses. Think of Emil Kapaun, a priest of Wichita, Kansas. In a prison camp in Korea he stole food from the commissary at night for his starving men knowing that he would be shot on sight if discovered. Depression and futility gripped many of the men in his unit. A Protestant chaplain with a wife and children at home was severely depressed and Emil knew he would die if something didn’t change. He deliberately said things to make him angry knowing that the experience of anger would bring him out of himself. It worked, and the man lived to return to his family. Emil tried everything to keep the men positive and hopeful. The men who got dysentery, he carried on his shoulders to the latrine and cleaned them. Eventually he got phlebitis and the guards took him off to die. The last thing his men heard was Emil assuring the guards he held no animosity or hatred for them.

Stanley Rother, whose bishop I was at one time, was a priest of Oklahoma City. He volunteered for the mission we had in Guatemala. He served the people with great dedication, teaching them their faith and instructing them in the social doctrine of the church. He carried on his ministry as priests he knew and worked with were murdered. His own catechists and parish leaders were abducted and murdered. Told that he was on the death list, he was urged to return to Oklahoma, which he did. But there only a short time, knowing clearly that it would mean certain death he decided to go back to Guatemala. He told his parents, “The Shepherd can’t run. I have to go back.” Father Rother was killed shortly after his return.

Jack Isaacs was a San Francisco priest. He was very gifted and widely read. Seeing that he was extremely talented I asked him if he would like to be sent for higher studies. He said he would prefer to work in a parish and preferably a poor parish. He asked to go with the St. James Society and spent five years in the altiplano. There he lived in a remote and difficult place for five years. There was no electricity and it was difficult to live in such an altitude and in such isolation. But he embraced it and invested himself in the service of the people. When he came home, he asked to go to an extremely poor parish where there was no rectory. I told him that we would get a condominium for him. But he insisted on living in the one room sacristy attached to the church so as to live more like the people he was serving. At the age of fifty he died of cancer and when I left his mother after visiting him the day before he died,  I said to her, “ You are the mother of a saint.” Jack Isaacs was an American priest.

Peter Lynch had been a priest over fifty years in the San Diego and San Bernardino Dioceses. He was sitting at a discussion table with a group of priests at a meeting on ministry in today’s world. One younger priest said to him, “Pete, if you were starting over as a priest today what would you do different?” He said, “I would pray more and be easier on the people.”

Last week I was at the Maryknoll house near San Francisco. A priest, 85 years old, had just left to go to Yucatan to celebrate the Holy Week Liturgies twice each day: in the main parish church and in an outlying mission church. Joseph Guetzloe, a Divine Word Father, was pastor of a Japanese community in San Francisco. When the Japanese were forced to move to segregation camps during World War II, Father Gutzloe asked to go with them. He voluntarily spent all the war years there with his people. A young priest, ordained one year, wrote to me about his experience during that first year and said, “ I have been looking for the lack of success in the lack of technique and finding it in the lack of holiness.”

Priests like these are in every diocese in this country. I have worked as a priest and bishop with priests in three dioceses, given retreats for priests in every part of this country, worked with priests from all States of the Union in connection with my work with the U.S. bishops’ conference, and I can tell you that there are humble, faithful, priests expending their talents and energies in serving Christ and his people everywhere in the United States. I have seen them. Even so, we know that we have come now to a perilous and critical point in the life of the church and in our own lives.

The cataclysmic avalanche of the sexual abuse scandal is a profoundly troubling experience for every priest. It touches not only the perpetrators and those so gravely hurt by them, but it is now engulfing the papacy itself and eroding the leadership and credibility of the bishops in the church. It forces us to ask the question of Karl Rahner, “Why would a modern man want to become or to remain a priest today?” How can an American priest persevere in the midst of such a shattering trial? How do we priests and how does the church persevere in time of severe trial?

Rahner gave one answer he found in the lives of brother priests. The authentic Catholic spirit, however, must also seek the way on a darkened path by turning to the Word of God. And for me one of the most powerful answers as to how we persevere in crushing trials is found in the last discourses of Our Lord in the Gospel of John, chapters 14 through 17. 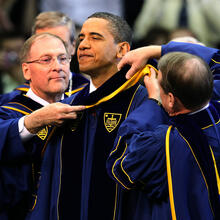 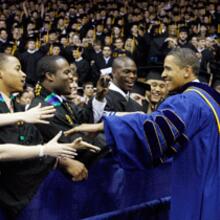 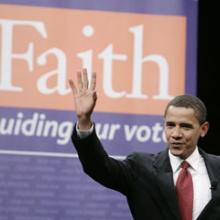 At critical moments in life it is important to take stock. The demand from many Catholic bishops and lay leaders that the University of Notre Dame rescind its invitation to President Obama to deliver the 2009 commencement address is surely a critical moment in the relationship between the Catholic Church in the United States and the wider American society. Before battle lines harden further on this issue, we should take time-out to ask some hard and penetrating questions. These are some of the questions that occur to me. 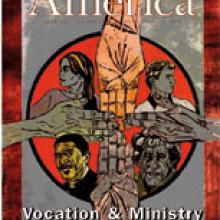 The Strengths of Priests Today
John R. QuinnJuly 01, 2002
Since I became a bishop 32 years ago, I have seen and worked with priests all over the United States. I have been a bishop in a rural diocese and in an urban diocese. I have given priests’ retreats in the East, West and Midwest. I have worked with priests in committees and on the staff of the 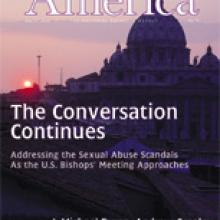 Considerations for a Church in Crisis
John R. QuinnMay 27, 2002
In terms of its harm and far-reaching effects, the present crisis in the church must be compared with the Reformation and the French Revolution. It is this conviction that brings to my mind the forthright declaration of the Second Vatican Council, Our era needs wisdom more than past ages.... The fut 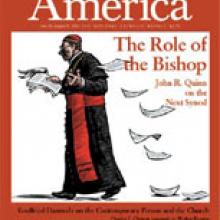 Synod 2001 and the Role of the Bishop
John R. QuinnJuly 30, 2001
The working document for next October’s international synod of bishops is now being circulated. The text, titled The Bishop: Servant of the Gospel of Jesus Christ for the Hope of the World, runs to 120 pages and has 229 footnotes. Significantly, the pope’s groundbreaking encyclical on Ch