Synod 2001 and the Role of the Bishop 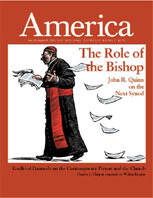 The working document for next October’s international synod of bishops is now being circulated. The text, titled The Bishop: Servant of the Gospel of Jesus Christ for the Hope of the World, runs to 120 pages and has 229 footnotes. Significantly, the pope’s groundbreaking encyclical on Christian unity, Ut Unum Sint (That They May Be One, 1995), is cited only once. The papal letter opening the third millennium celebrations is quoted once. The letter closing the jubilee year and opening the third millennium itself, Tertio Millennio Ineunte, is never quoted. This is worthy of note because the recent consistory of the world’s cardinals centered around this last document, which is both forward-looking and challenging.

The working document is not an agenda. It does not set the parameters for discussion at the synod. Its purpose is to give some indication of topics that bishops from around the world would like to see raised.

In l974 I was appointed by Pope Paul VI to the synod on evangelization. My appointment did not come until mid-July, after all the meetings of the U.S. representatives had taken place. I asked Cardinal John Dearden what I could do to prepare for the synod. He responded that I might read some articles, but that in reality there was no way to prepare, since when the bishops of the world come together in Rome a new chemistry would begin to work and the direction of things could be quite different. In any case, a working document should not be taken as a sure predictor of what direction a synod will take.

My observations on the document are both positive and negative. On the positive side, the document, from beginning to end, is emphatically based on hope. Hope is mentioned 27 times alone in the first nine pages. The documents of the Second Vatican Council are quoted as stating the paramount principle that the bishop, beyond all concerns and difficulties...must have hope, before all else. The centrality of the Bible for ecclesial life and for the personal spiritual growth and depth of the bishop is underlined. This teaching of the council needs continuing and constant emphasis in the whole church. There is also a call to openness to the world, to active involvement in addressing its complex problems and an awareness of the emergence of entirely new problems calling the church to deeper reflection. The document admits the widespread silent, easy abandonment of church practice by a great number of people and the decline in vocations to the priesthood and religious life. In the space of this article I cannot cite all the positive and reassuring factors the document contains, but these may serve as an example that the document has both realistic and positive features.

There is an astonishing omission in the section of the document that treats of episcopal conferences. In this section, 11 documents of the pope or of Roman congregations are cited. But an important section of Lumen Gentium, the Second Vatican Council’s Dogmatic Constitution on the Church (1964), is never cited. In that document we read (No. 23) that the patriarchates came into existence by divine providence and that this variety demonstrates with greater clarity the catholicity of the undivided church. Then it says, In a similar way episcopal conferences can today make a manifold and fruitful contribution to the concrete application of the spirit of collegiality. Experts point out that the council is using here an analogy of proportionality between conferences and the patriarchates. Conferences are not in every respect identical with the patriarchates, but they do have some qualities of collegiality in common. This is an important statement in a document about a general council of the church, and its omission in the working document would seem to be deliberate.

Bishops around the world are dissatisfied with the treatment by Roman congregations of episcopal conferences. This statement is not based on mere hearsay. The bishops themselves in the continental synods (for Africa, Asia and others) have explicitly brought up the subject. Most recently, at the consistory of cardinals in May, Cardinal Aloisio Lorscheider of Brazil was reported in The New York Times as saying, The decisions of Vatican Council II are not being applied, and we all suffer...from a distant bureaucracy that is increasingly deaf. And Cardinal Walter Kasper, a distinguished theologian and now a member of the Roman Curia, said while he was still a diocesan bishop that the right balance between the Curia and the local dioceses has been destroyed. And he added, This is not only my own perception; it is the experience and complaint of many bishops from all over the world (Am., 4/23).

Like the omission of Lumen Gentium in treating conferences, the fact that Ut Unum Sint is cited only once in treating ecumenism is a notable omission. There is hardly anything that more directly affects ecumenical progress, as well as the ministry of the bishops, than the way the papal primacy is exercised. The pope himself in that encyclical invited the bishops of the world to dialogue with him about the exercise of the primacy. But there is not a word about this in the working document. The encyclical states that it is absolutely clear that ecumenism...is not just some sort of appendix’ which is added to the church’s traditional activity. Rather, ecumenism is an organic part of her life and work, and consequently must pervade all that she is and does. This means that, among many other things that must be considered, certainly the larger context of the bishop’s ministry in its relationship to the pope and to the Roman Curia are major issues for ecumenism. It is abundantly and repeatedly evident that this is a neuralgic point for the Orthodox. Is it possible to envision a synod on the ministry of the bishop and omit such topics?

From beginning to end, the document points out the manifold duties and responsibilities of the bishop. But it does not give sufficient emphasis to the fact that no single human being could personally deal with all these things. It does mention the need for communion with priests, religious and lay people and for structures such as pastoral councils and priests’ councils. But it would be important to make more explicit the fact that there is a human dimension to the bishop that requires leisure, friendship, diversion and rest as well as study and prayer and consultation. Also, the importance of delegation cannot be overestimated. Many bishops are workaholics and find it difficult to delegate. This can result in a sort of spiritual machismowhich means that the bishop cannot take a day off, that he is always at work, that he must know everything and that every decision must come to him.

A great deal of work went into the preparation of the synod document. But from my point of view, it would have been more effective and in keeping with the thinking of bishops all over the world if the working document had included Sections 44 and 45 of Tertio Millennio Adveniente, in which the pope calls for renewed attention to the Petrine ministry and to collegiality, to the reform of the Roman Curia and to the importance of the bishops, listening to the peoplein other words, to the importance of responsible public opinion in the church. These issues are on the minds of large numbers of bishops. Judging from recent papal documents such as Ut Unum Sint and Tertio Millennio Ineunte, these issues are also on the mind of the pope. Should they not feature prominently in a synod on the ministry and life of the bishop in the church? 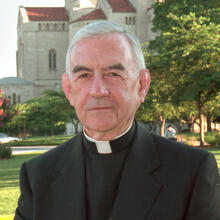