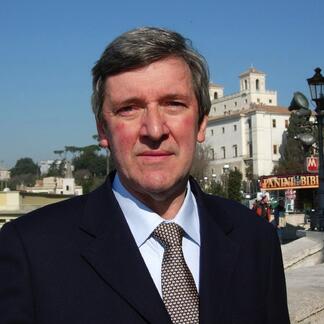 Dispatches
Pope Accepts Resignation of US Bishop Who Failed to Report Priest Suspected of Child Abuse
Gerard O’ConnellApril 21, 2015
Pope Francis has accepted the resignation of Bishop Robert Finn from his post as pastor of the diocese of Kansas City-St Joseph Missouri The bishop was the first Catholic prelate to be convicted by a civil court in the United States for the criminal lsquo misdemeanor rsquo of not reporting a pr

Dispatches
The Vatican Reaches Positive, Amicable Conclusion with Main Leadership of American Sisters
Gerard O’ConnellApril 16, 2015
Pope Francis spent 50 minutes with a delegation from the Leadership Conference of American Women Religious LCWR today after the Vatican rsquo s Congregation for the Doctrine of the Faith CDF and the LCWR announced in a joint report that they had reached a positive conclusion to a three-year e

Vatican Dispatch
Call Him a Saint?
Gerard O’ConnellApril 15, 2015
The news, though ground-breaking, went largely unnoticed. The Vatican has given its clearance to open the cause on May 3 for the canonization of Dom Hélder Câmara, the “bishop of the poor” and one of the most influential Latin American church leaders of the 20th century.Cardinal Angelo

Dispatches
O’Malley Brings Question of Accountability to Francis' Cardinal Advisors
Gerard O’ConnellApril 15, 2015
Cardinal Sean O rsquo Malley put the question of the accountability on the table of this week rsquo s meeting of the pope with his ldquo Council of Nine rdquo cardinal advisors His intent is to find a juridical and competent way to deal effectively with bishops and religious superiors who abuse t

Dispatches
Pope Proclaims Jubilee, says: ‘The Church is to be a Sign and Instrument of God’s Mercy’
Gerard O’ConnellApril 11, 2015
ldquo This is a time for the Church to rediscover the meaning of the mission entrusted to her by the Lord on the day of Easter to be a sign and an instrument of the Father rsquo s mercy rdquo Pope Francis said in St Peter rsquo s Basilica on April 11 after publishing the Bull of Indiction for t

Dispatches
Pope Appeals for Peace in Middle Eastern and African countries and the Ukraine
Gerard O’ConnellApril 05, 2015
In Easter message to the world, a forceful appeal for peace

Dispatches
Pope Francis at the Coliseum Remembers Today’s Persecuted Christians
Gerard O’ConnellApril 03, 2015
Pope Francis speaking at the end of the Way of the Cross at Rome rsquo s Coliseum prayed for the Christian men women and children ndash ldquo our brothers who are persecuted beheaded and crucified for their faith in you Jesus before our eyes and often with our silent complicity rdquo Tens

Dispatches
Cantalamessa: Christians Are Being Killed in Many Countries and the World is Silent.
Gerard O’ConnellApril 03, 2015
Jesus over came violence by 'exposing all its injustice and futility.'