Cardinal Nichols: The synod on young people ‘unlike any other I have attended’ 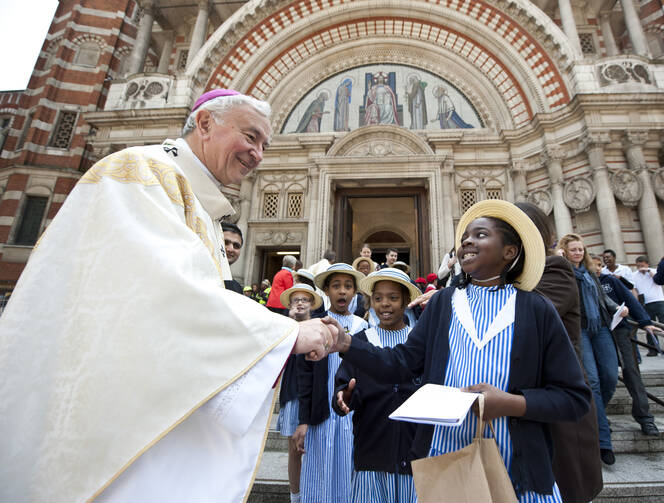 Cardinal Vincent Nichols has attended many synods over the years but, in this exclusive interview with America, he said this Synod of Bishops on young people has been “unlike any other I have attended—at moments it’s been fun.”

There is “a wonderful spirit” at the synod and he thinks this is due to the fact that “we’ve gone from talking about young people and from talking to young people, to talking with them. In a strange sort of way it’s become what Pope Francis means by synodality.”

Nichols, 72, who has been cardinal-archbishop of Westminster since 2009, recalled that “Pope Francis always had this view that there’s a synodal nature to the church as a whole.” He remarked, “I think we got a glimpse of this during these first three weeks, of how there’s an interplay and a genuine sharing of enthusiasm, vision and promise between bishops, who as a whole are a bit older, and young people who are actually not that young but nevertheless have a great verve and enthusiasm.”

His emphasis on synodality, the process of “walking together” introduced by Pope Francis in the synods of 2014 and 2015, is significant. Cardinal Nichols recalled that much has changed from the synods that were held under previous pontificates: “This method is different. I think that for the first time there’s been an attempt to focus the collecting of these individual contributions into some themes.” Furthermore, “this time the working document [“instrumentum laboris”] was divided into three clear sections and we’ve taken them one section at a time.” In previous synods, he said, “we’ve sat there for ten days, maybe two weeks, endlessly listening and it was really, really difficult. This time there’s been a rhythm of some listening, group work, report back, end of part one, then do the same.”

He noted, however, that “while there’s been much more of a rhythm to this synod in comparison to past ones, this time something new has been introduced which to me has been enormously important, and that is after every five speeches there is three minutes silence.” He said that he had “never thought that such a simple change could have such a profound difference” but it has because, “first of all, it’s broken this incessant flow of words. Secondly, it’s given me and everybody mentally time to recover. Thirdly it’s given us the space to meditate, to try and absorb what’s been said and focus on a few key things. So it’s not just three minutes silence, it’s three minutes reflection, almost edging into contemplation and it’s produced a very different, more receptive, more thoughtful, more spiritual reception of everything that’s been said in that big hall.”

The English cardinal believes that synodality has truly flourished at this synod with young people, in a way not fully experienced hitherto. Nonetheless, many synod fathers were surprised that the draft final text (and presumably the definitive text that will be approved on Oct. 27) speaks a lot about “synodality,” even though the subject was not discussed that much in the plenary or working group sessions.

Vatican sources say that the reason for this emphasis in the draft final document is that the pope wishes this process to be extended to all the local churches and dioceses across the world as a way of revitalizing the whole church and developing a new way of relating together and working together between bishops, religious women and men, clergy and the lay faithful.

Cardinal Nichols noted a difference between the 2014 and 2015 synods on the family and this one: He recalled that the two synods on the family “were tense, a bit confrontational” and while there were “small elements” of that in this one too (presumably, though he did not say so, over the use of the term L.G.B.T.), he said, “for the most part, what I’ve come away with is—and no matter what the final document says—the church is alive and the church is full of energy, and the person of Jesus is touching people’s lives in the most remarkable ways.”

He cited testimonies that he had heard from Iraq, northeastern Pakistan and those from the young people at the synod “who talked about their lives in central Africa in the face of poverty, every kind of situation imaginable.” But he added that throughout, “ there’s this constant thing of Jesus alive in the world and touching the hearts of young people.”

He mentioned two interventions that particularly struck him in the plenary sessions. The first was by Cardinal Ouellet. He said the Canadian cardinal, 74, recalled that some 60 years ago, “he went to the seminary as a very good Catholic but did not know Jesus and, he said, over the seminary years he got to know the person of Jesus.” He said Cardinal Ouellet then made a point that no one else at the synod made when he said that “the point of knowing Jesus is that it opens the way to the mystery of the Trinity, and so through the knowledge of this person we enter into that life of God: Father, Son and Holy Spirit, and we begin to understand through the person of Jesus how the Spirit works in our lives and how God is the Father of Mercies.”

"What is being evoked in bishops is a love for the vitality and faith and courage of these young people.”

Cardinal Nichols said, “he put in his speech a very important Trinitarian dimension to what has been a very common, very strong trend that the essence of Christian faith is the knowledge of Jesus Christ. He’s enriched that. That was a very outstanding speech for me.”

He told America that another intervention that struck him was “a testimony from India about the martyrdom of a young boy by Hindu extremists.” He said “they just kept provoking him with the question: ‘Will you give up your Jesus?’ And the boy kept responding ‘No’ until eventually he was killed by them in a very cruel way.” He recalled that “the final question they put to this young boy, who was buried up to his neck in mud, was ‘will you give up your Jesus?’ And they [the extremists] were standing there holding a great stone above his head, and the boy looked at the stone and looked at the people that were about to kill him and said ‘No, I will not!’ And they hurled the stone at his head and he died.”

Asked what he hopes to take back to England from this synod, Cardinal Nichols said “what we do well in England is the kind of ‘run-of-the-mill’ events and occasional big events, but I think we have got to find a way of tracing these together and linking them up.” He was impressed by the testimony of one bishop who reported that every one or two years in his diocese they held gatherings of thousands of young people “at which they gave out copies of the bible, and then afterwards using social media they do a ‘lectio divina’ [or prayerful reading of the scriptures] each week for all those young people, and they share their thoughts.” Cardinal Nichols noted that “from a great gathering they try to build a digital network of discipleship” and said “I think I’d like to try that in England.”

How will the diversity present at the synod be reflected in the upcoming document? Cardinal Nichols observed that “it’s the case with every synod,” adding, “I don’t judge synods by the final list of propositions that are voted on.” But this time, he said, “there’s a resolution that a letter will be written from the synod fathers to the young people of the world, and there are some very interested people being entrusted with that task, and I hear it might be in video form. So I think they’re beginning to grasp the idea that if we’re going to get through to young people we’re going to have to use the modern means of communication and not expect them to sit down and read a long document.”

The synod reminds U.S. Catholics to listen to the global church
The Editors

Cardinal Nichols also referred to Pope Francis’ presence throughout most of the sessions and how much this meant to all present. “The fact that he is in principle there is very, very important because he does what he asks us to do, he sits and listens.” Indeed, he said, “a great part of the respect that you show to your fellow Catholics from around the world is to listen; if you’re not prepared to listen then there’s something missing. We must listen to each other and not be constantly wanting to move on to the next stage or to action.”

But, he added, “I must also say that on the Wednesday mornings when he’s not there, because he’s at the public audiences, it doesn’t change in the synod; it’s the same focus, and the same attention is given. So he sets a standard and we keep it whether he’s there or not.”

[Explore America's in-depth coverage of the Synod on Young Adults]

Let's see what changes will emerge from this Synod on Young People. As the saying goes "The proof is in the pudding".