A Secular Saint: Albert Camus at 100 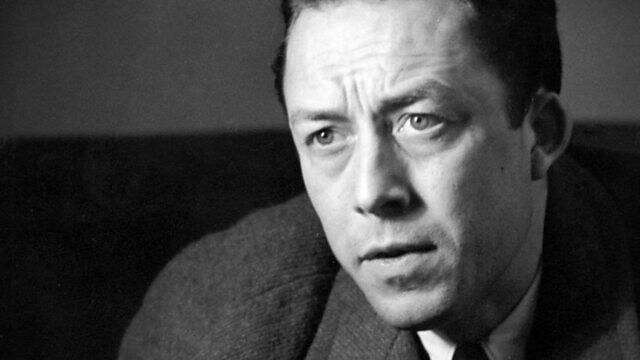 “He taught us that Christians should get away from abstractions and confront the blood stained face of history—that we should speak out clearly,” says Prejean, who credits Camus’s essay “Reflections on the Guillotine,” as a major influence during her work on Dead Man Walking.

“The word is thickened,” she explains. “When I finished the first draft, my [Random House] editor Jason Epstein suggested I read Camus. I had read him in college, but going back to him substantiated what I was saying and gave me a new edge. Camus helped me to see how Christians—and my own self—were slack. He thickened my argument, deepened my understanding of how we can live, and be slack by not doing anything about the death penalty. It’s an issue of the poor and shows that to the extent we’re not involved with the poor, we go along with injustice. Camus was good because he’s so honest.”

Camus equated execution with revenge; he considered the long build up to the guillotine, France’s method of capital punishment, a form of torture. “To cut short the question of the law of retaliation,” he wrote “we must note that even in its primitive form it can operate only between two individuals of whom one is absolutely innocent, and the other absolutely guilty. The victim, to be sure, is innocent. But can the society that is supposed to represent the victim lay claim to innocence?”

Camus’s logic, Prejean wrote in her final draft, “is for me a moral compass on the issue of capital punishment. He wrote this essay in 1957 when the stench of Auschwitz was still in the air, and one of the cardinal points is that no government is ever innocent enough or wise enough or just enough to lay claim to so absolute a power as death.”

A Writer to Love

On the 100th anniversary of Camus’s birth, his novels, essays and philosophical works enjoy an international following. A host of books about Camus this season enhance his status as one of the most widely taught writers of the 20th century. Susan Sontag may have said it best: “No modern writer I can think of, except Camus, has aroused love.”

Camus the nonbeliever wrote for a French society that was historically Catholic and much more religious than it is today. Camus gave a lecture at a Dominican monastery in 1948, putting the moral challenge of the time in these terms: “If not to reduce evil, at least not to add to it.”

Several of his works prompted anticipation of the author’s imminent conversion. His untimely death did nothing to silence the rumors that he had been secretly receiving instruction in the Catholic faith. All this was ironic tribute to a man whose philosophy began with the assumption that God does not exist...Despite his protests, many have suggested that Camus’s position was not so far removed from Christianity as he supposed. The number of those who serve Christ is not confined to self-professed Christians. Paradoxically, Camus served the Truth by keeping faith with his conscience and denying God.

Camus was a moralist who insisted that justice matters more than politics, that human need must confront “the unreasonable silence of the world,” as he wrote in The Myth of Sisyphus. Published in France in 1942, the book had a powerful appeal to readers living under the boot heel of the Nazi occupation, and marks a starting point, of sorts, in the evolution of Camus’s thinking on state-sponsored killing.

“There is but one truly philosophical problem, and that is suicide,” he wrote. “Judging whether life is or is not worth living amounts to answering the fundamental question of philosophy.”

French Resistance leaders took elaborate steps to make sure couriers and planners did not have all the information on major operations, lest they be captured and put to torture. Some committed suicide to avoid torture.

In the title essay, Camus calls Sisyphus, “the wisest and prudent of morals”—as it were, an Everyman of the Resistance—condemned by the gods to push a stone up the hill, only to have it fall back each time he neared the plateau. The quest for moral truth, to restore peace, lay in the faith to keep pushing, again and again, regardless. “Sisyphus teaches the higher fidelity that negates the gods and raises rocks,” wrote Camus. “The struggle toward the heights is enough to fill a man’s heart. One must imagine Sisyphus happy.”

Camus had grown up poor in Algiers, the capital of Algeria in North Africa, a French colonial department. Home was a small flat shared with a brother, austere grandmother, and his mother who was illiterate, nearly deaf and had withdrawn into a numbed silence after her husband’s death in World War I, when the boy was an infant. Camus carried a story from his mother of the father he never knew, witnessing a public execution before the war, going home, getting sick to the stomach.

Stranger in a Strange Land

Camus grew up among French colonial settlers, Muslims and Arabs; thanks to scholarships and mentors, he received a classical French education and graduated from university in Algiers. After early newspaper work in Algiers, his writing became more focused in his twenties in France. In 1942 he published The Stranger, the novel that put him on the literary map. As he worked on Sisyphus he wrote editorials for Combat, a clandestine newspaper during the Resistance.

Wartime activists put their lives at serious risk, transmitting information and supplies with the strategy of destroying Nazi transportation lines. Everything was preparatory to an Allied invasion. One of Combat’s printers was tortured by the Nazis, escaped and later shot himself when he was about to be re-captured, as Sean B. Carroll writes in Brave Genius (Crown), a well-textured history of Camus’s Resistance activities with the biologist Jacques Monod. Carroll quotes one of Camus’s unsigned editorials, as the war drew to a close: “The time is fast approaching when the people of this country will be judged not by their intentions but by their actions, and by the actions to which their words have committed them.”

When the Allies ended the German occupation and toppled the Vichy government in 1944, French officials began trying collaborators. Camus supported the execution of those found guilty of killing members of the Resistance. As the trials degenerated into purges, his views began to shift toward the position he would later articulate in “Reflections on the Guillotine.” As questions of justice and death bore down on Camus, the French novelist and Nobel laureate, François Mauriac, had a hand to play. As Robert Zaretsky writes in the superb new book, A Life Worth Living: Albert Camus and the Quest for Meaning (Belknap/Harvard):

François Mauriac, whose resistance and literary credentials were equal to those of Camus, had already signed the petition [to prevent execution]. Devoutly Catholic, Mauriac had previously collided with Camus on the question of the purge. The older man insisted on the need for mercy and national reconciliation, while the young editor of Combat replied that national healing required a foundation built on implacable justice. When the trials had turned into sham events, however, Camus confessed in an editorial: “We now see M. Mauriac was right: we are going to need charity.”

A major turn in Camus’s journey toward the guillotine essay came in 1951 when he published The Rebel, which triggered one of the most spectacular literary battles in post-War Europe. The Nazi assault on European civilization had failed in the end; but Communism, for Camus, was just as morally blind. Marxist totalitarianism sacrificed justice as means to an end: the classless society. Camus' position drew the scorn of Jean-Paul Sartre, a committed Marxist, who published a long public letter attacking Camus himself as much as the book, throwing their friendship off the rails. But beneath the weight of ideology, Camus was struggling with meanings of justice.

His notion of the rebel, as one “who says no” to injustice, “but whose refusal does not imply a renunciation” was built on a moral bedrock. “Rebellion cannot exist without the feeling that somewhere, in some way, you are justified.” With a nod to Descartes, “Cogito, ergo sum: I think, therefor I am,” Camus writes: “In order to exist, man must rebel, but rebellion must respect the limits that it discovers in itself—limits where minds meet, and in meeting, begin to exist.”

By 1957, when he wrote “Reflections on the Guillotine,” Camus had taken a lonely position in refusing to take sides on the Algerian civil war. Denounced by Sartre and other former allies from the left for his unwillingness to endorse the National Liberation Front in Algeria as it sought independence, Camus was appalled by the front’s terror tactics. As he told a news conference in Stockholm, on receiving the Nobel: “People are now planting bombs in the tramways of Algiers. My mother might be on one of those tramways. If that is justice, then I prefer my mother.”

He was just as appalled by the French military policy of torturing Algerian captives.

“The unpunished crime, according to the Greeks, infected the whole city,” he wrote in the guillotine essay. “But innocence condemned or crime too severely punished, in the long run, soils the city just as much. We know this, in France.”

The ethos of resistance that Sister Helen Prejean drew from Camus confronted “the supreme punishment [that] has always been, throughout the ages, a religious penalty,” he had written. “Inflicted in the name of the king, God’s representative on earth, or by priests or in the name of society considered as a sacred body, it denies, not human solidarity, but the guilty man’s membership in the divine community, the only thing that can give him life.”

In our day, as the power of the state supersedes religion in Western democracies, many parts of America cleave to the essence of religious penalty—an eye for an eye. State-sponsored killing has expanded to extra-judicial killing by the White House, using drones to wipe out suspected terrorists in faraway spots on the map of Islam, with innocent people in the environs written off as collateral damage.

In “Reflections on the Guillotine,” Camus wrote with the unerring precision of a prophet: “I should like to be able to love my country and still love justice.”

Jason Berry is the author, most recently, of “Render unto Rome: The Secret Life of Money in the Catholic Church.”