The U.S. has a moral responsibility to raise its national debt ceiling 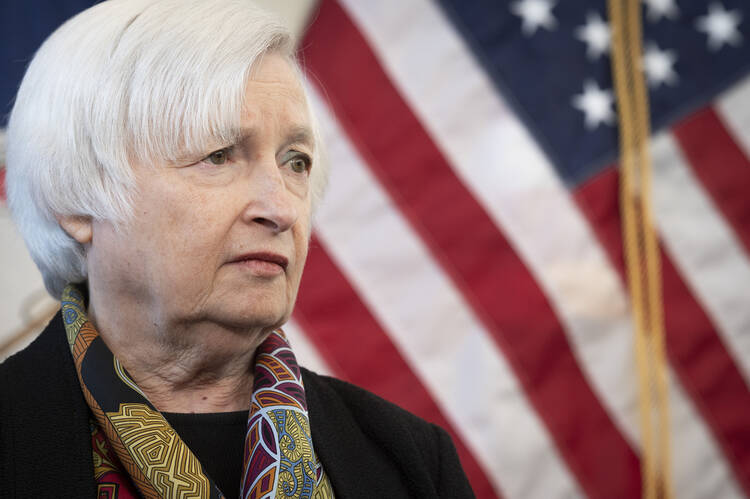 Treasury Secretary Janet Yellen, seen here in a 2022 photo, has notified Congress that the U.S. is projected to reach its debt limit on Thursday and will then resort to “extraordinary measures” to avoid default. (AP Photo/Cliff Owen, File)

We are seeing, once again, the recurring saga and charade of Congress threatening not to raise the ceiling on U.S. government debt, a refusal that would trigger a default and a broader international financial crisis. Treasury Secretary Janet L. Yellen has warned that the United States will reach its borrowing cap of $31.4 trillion on Thursday, necessitating “extraordinary measures” (including the selling of some government investments and the suspension of investments in federal employee retirement funds) to avoid an immediate default.

But the new Republican majority in the U.S. House is signaling that it will refuse to raise the cap without major cuts to government spending, and even Ms. Yellen’s “extraordinary measures” will not avert a default indefinitely.

Does the United States having a debt ceiling even make sense? In theory, yes. In practical policy terms, no.

Does the United States having a debt ceiling even make sense? In theory, yes. In practical policy terms, no.

In reality, the debt ceiling is totally unrelated to federal spending and taxation levels. Cuts in government spending are always politically difficult, and forcing a debt ceiling crisis would not make these cuts any more popular. (The economist Milton Friedman reminded us of the axiom that “there is nothing so permanent as a temporary government program.”) As for raising more money for the government, lawmakers like to tell their constituents that they are “courageously” voting to cut taxes. The standard operating procedure of Congress, whichever party is in control, is deficit spending, which raises the federal debt.

For most countries, especially smaller, emerging-market countries, federal debt limits are serious. Once the ratio of outstanding debt to gross national product starts to rise, international lenders will add a risk premium to interest rates for these countries for any further borrowing. That is, the international financial markets, rather than national legislatures, set a de facto debt ceiling, or at least an incentive to keep debt within reasonable limits.

But the United States enjoys what is called the “exorbitant privilege.” The U.S. dollar, for the most part, is the international medium of exchange and the main store of value for reserve holdings of most central banks. More than half of the U.S. debt is held by foreign central banks and foreign financial institutions. Why? The U.S. dollar is the key international currency for global trade and so debt in the form of the dollar is less risky, since it is not subject to changes in exchange rates. With this privilege, the United States can run up debt-to-G.D.P. ratios much higher than most other countries are able to. And we do. We are fiscal free riders on the rest of the world. Unlike most countries, we do not necessarily pay a price for low rates of personal saving, or for running up a debt.

We are fiscal free riders on the rest of the world. Unlike most countries, we do not necessarily pay a price for low rates of personal saving, or for running up a debt.

The only other major country that does not necessarily have to worry about a high national debt is Japan. But the yen does not enjoy the same exorbitant privilege as the U.S. dollar. Still, the Japanese debt is well over 200 percent of G.D.P., and the country’s interest rates remain low. What gives? Simply, the Japanese themselves own almost all of their debt and they hold it willingly for patriotic reasons. Such behavior was seen in the United States in the aftermath of World War II and the Korean War, for citizens to buy and give gifts of zero-interest savings bonds to family members. But that era is long gone.

The danger now is the possibility that the United States will default on our debt (when the debt ceiling is reached), and the Treasury will not be able to pay interest to the holders of this debt. Foreign central banks could then sell off their holdings of our debt, which in turn will push U.S. interest rates up. But by dumping U.S. debt, most foreign central banks will be reducing the value of their own reserve assets. This would set the stage for a run on their own currencies, thereby turning a U.S. debt crisis into a series of international currency crises.

By refusing to raise the debt ceiling, Congress would thus punish many emerging-market countries around the world.

By refusing to raise the debt ceiling, Congress would thus punish many emerging-market countries around the world. Currency crises are nasty pieces of work, and we should not underestimate the damage they do to poorer countries. Just as many are slowly emerging from the ravages of Covid-19, do we need to trigger a new crisis and more hardship on the rest of the world?

Not raising the debt limit is a clear “beggar thy neighbor” policy, making an already troubled and financially interconnected world more unstable.

We Americans have to face facts: Our debt policies affect the rest of the world as much as they affect the United States. The dollar and the dollar-denominated bonds are global media of exchange and global stores of wealth. Foreign countries hold these assets in good faith that they have stable values. Let us not double-cross our neighbors near and far.

We have a moral responsibility to the rest of the world to behave responsibly. The president and Congress should abolish debt ceilings and work toward fiscal reform for taxes and pensions in a bipartisan gradual process.

Paul D. McNelis, S.J., is America’s contributing editor for economics and professor emeritus of finance at the Gabelli School of Business at Fordham University, in New York City.