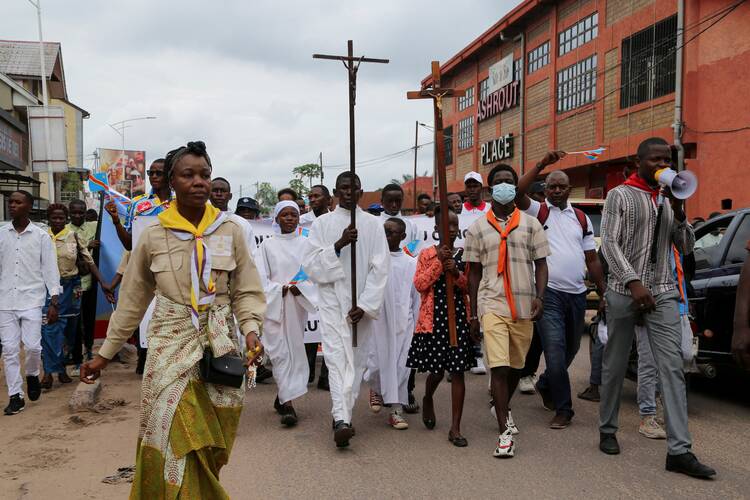 Demonstrators march during a protest by the Democratic Republic of Congo's Catholic and Protestant churches, against escalating violence in Kinshasa Dec. 4, 2022. Deadly violence hit Christians in Africa Jan. 15, 2023, with a Catholic priest in northern Nigeria burned to death and as many as 17 Christians killed in a blast in eastern DRC. (OSV News photo/Justin Makamgara, Reuters)

NAIROBI, Kenya (OSV News)—Deadly violence hit Christians in Africa Jan. 15, with a Catholic priest in northern Nigeria burned to death and as many as 17 Christians killed in a blast in eastern Congo.

In Nigeria, Father Isaac Achi was burned to death at his residence in Paikoro, a local government area of Niger state. The armed men had set his house ablaze after a failed break-in at 3 a.m. Another priest who was at the house, identified only as Father Collins, was shot and injured as he tried to escape.

An Indigenous priest from the area ordained in 1995, Father Achi recently was the priest in charge of St. Peters and Paul Catholic Church in the Diocese of Minna, Nigeria.

Deadly violence hit Christians in Africa Jan. 15, with a Catholic priest in northern Nigeria burned to death and as many as 17 Christians killed in a blast in eastern Congo.

Government and church officials in the state have condemned the killing of the priest. The Christian Association of Nigeria called for speedy investigations and arrest of the killers.

“Enough of the attacks and wanton killings of innocent Nigerian citizens,” said Archbishop Bulus Dauwa Yohanna, chairman of the association in Minna in a media statement. He called for the repose of Father Achi’s soul and all others killed in the violence.

The association said the attackers had arrived in the area in the early Sunday hours and shots were heard sporadically, before turning on the priest’s house.

The motive for the latest attack was not immediately clear, however. In the predominantly Muslim north of Nigeria, armed men—commonly referred to as “bandits” in the country—have targeted priests and pastors in the recent past, but as the West African country prepares to vote Feb. 25, kidnappings for ransom are on the rise, according to reports.

In Nigeria, Father Isaac Achi was burned to death at his residence in Paikoro, a local government area of Niger state. The armed men had set his house ablaze after a failed break-in at 3 a.m.

It was not the first attack against Father Achi, who in 2011 survived an attack by Boko Haram, the north Nigerian militant group, during a Christmas church service. The attack left 44 parishioners dead. He also had been shot while blessing a child and had survived an abduction by militants.

In the Democratic Republic of Congo, the death toll from a Jan. 15 church attack is an estimated 17 people, according to figures provided by DRC’s government spokesman, with some sources however saying 10 people were killed and 39 others were injured. People were killed in a bomb explosion during a service in a Pentecostal church in the eastern town of Kasindi, near the DRC border with Uganda.

They had been gathered in the church for baptism.

“Several among us died on the spot, others had their feet cut in two,” Esdras Kambale Mupanya, the 42-year-old deacon at the evangelical church in Kasindi, told the AFP news agency. “God saved me, and I came out in good health with my choir members. Today was not the day I should die.”

The army has linked the attack to the Allied Democratic Forces, an Islamic extremist group originally from Uganda, operating in central Africa. In 2019, the militant group pledged allegiance to the Islamic State, also known as Daesh.

Congolese President Felix Tshisekedi condemned the attack saying he was saddened by the “heinous crime.”

Fredrick Nzwili - OSV News
Show Comments ()
Join the conversation: Login or create an account
Before you can comment, you need to update your profile to include your first and last name, as required in our comments policy. Then reload this page and you'll be set up for commenting. Update your profile