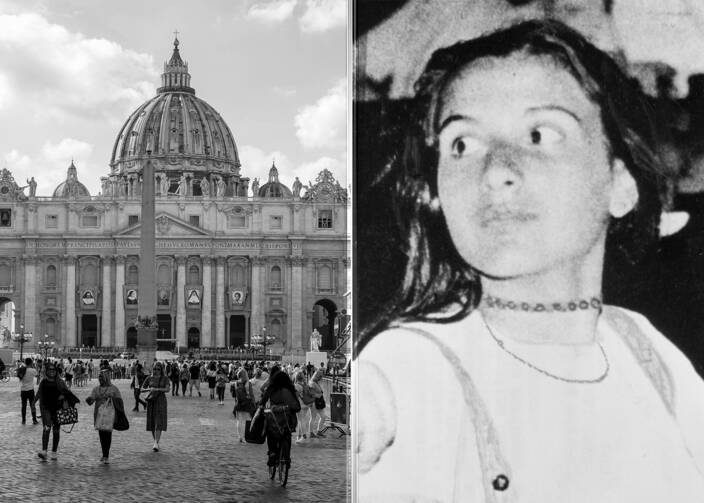 From left to right: External view of St. Peter's Basilica, Rome (Ágatha Depiné/Unsplash). Emanuela Orlandi is pictured in a photo that was distributed after her disappearance in 1983 (CNS photo). Composite: America Media

ROME (AP)—The Vatican said Monday it has reopened the investigation into the 1983 disappearance of the 15-year-old daughter of a Vatican employee, months after a new Netflix documentary purported to shed new light on the case and weeks after her family asked the Italian Parliament to take up the cause.

The Vatican prosecutor, Alessandro Diddi, opened a file on Emanuela Orlandi’s disappearance, based in part “on the requests made by the family in various places,” said Vatican spokesman Matteo Bruni.

A lawyer for the Orlandi family, Laura Sgro, said she had no independent confirmation of the development, which was first reported by Italian agencies Adnkronos, LaPresse and ANSA. She noted that her last Vatican filing on the case came in 2019.

Emanuela Orlandi's disappearance has been one of the Vatican’s enduring mysteries, and over the years has been linked to everything from the plot to kill St. John Paul II and a financial scandal involving the Vatican bank to Rome’s criminal underworld.

Orlandi vanished June 22, 1983, after leaving her family’s Vatican City apartment to go to a music lesson in Rome. Her father was a lay employee of the Holy See.

Her disappearance has been one of the Vatican’s enduring mysteries, and over the years has been linked to everything from the plot to kill St. John Paul II and a financial scandal involving the Vatican bank to Rome’s criminal underworld.

The recent four-part Netflix documentary “Vatican Girl” explored those scenarios and also provided new testimony from a friend who said Emanuela had told her a week before she disappeared that a high-ranking Vatican cleric had made sexual advances toward her.

In addition, Sgro and Orlandi’s brother Pietro announced a new initiative last month to convene a parliamentary commission of inquest into the case.

Three previous initiatives in the Italian Parliament have failed to get off the ground, but Sgro and opposition lawmaker Carlo Calenda argued that the Vatican couldn't consider the case closed when there were so many questions left unanswered.

Speaking to RaiNews24 on Monday, Pietro Orlandi called Diddi's decision a “positive step” that the Vatican has apparently changed its mind, gotten over its resistance and now will go over the case from the start.