The death penalty’s 2022 lowlight: a record number of botched executions 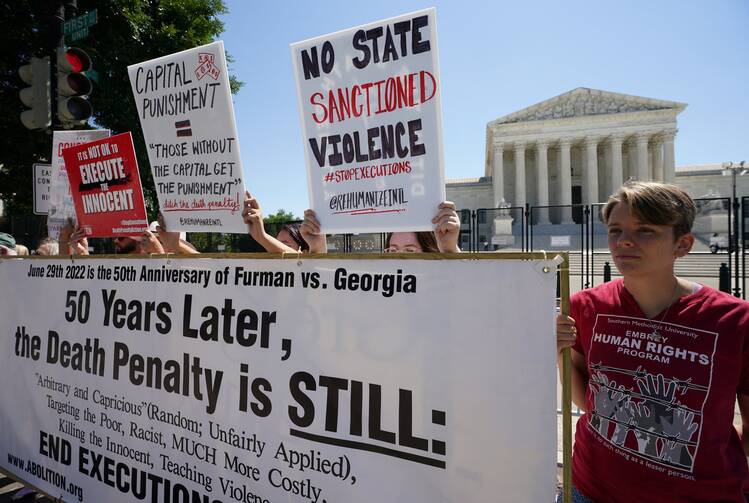 Members of the Abolitionist Action Committee protest capital punishment in front of the U.S. Supreme Court building in Washington on June 29, 2022, to mark the 50th anniversary of the 1972 Supreme Court decision in Furman v. Georgia, which determined the death penalty was unconstitutional. (CNS photo/Kevin Lamarque, Reuters)

This has been a mixed week for supporters of the global movement to abolish the death penalty. On the world stage, President Joe Biden passed up an opportunity to add the United States to the list of U.N. members that have abandoned capital punishment.

At the general assembly on Dec. 15, 125 nations voted for a moratorium on the death penalty. The United States joined 36 other nations—Saudi Arabia, North Korea, China and Iran, among them—in voting against the proposed ban.

Domestically there was better news for abolitionists on Dec. 14, when Gov. Kate Brown of Oregon commuted the sentences of all 17 prisoners on the state’s death row.

“Seven of the 20 execution attempts were visibly problematic as a result of executioner incompetence, failures to follow protocols, or defects in the protocols themselves.”

That decision was applauded by Archbishop Alexander K. Sample of Portland.

“Human life is precious,” he said in a statement. “Each of us, beloved by God no matter what, has an inherent and inalienable dignity. As archbishop, my primary concern is with the conversion and salvation of all souls in Western Oregon, including those incarcerated—whatever their crime.”

The governor’s commutations were ordered just a few days before the release of an annual report on capital punishment in the United States from the Death Penalty Information Center. The primary lowlight of 2022, according to the center, was a shocking number of botched executions in the few states that still carry out the death penalty.

According to the report: “Seven of the 20 execution attempts were visibly problematic—an astonishing 35 percent—as a result of executioner incompetence, failures to follow protocols, or defects in the protocols themselves.”

“We recorded more botched executions this year than in any prior year,” Robert Dunham, the executive director of the D.P.I.C., said. “The closest before was five in one year during the 1990s. And that was five in a year in which there were 40-some executions.”

Given the trauma associated with such botched executions, do the mishaps constitute grounds for a Supreme Court challenge against capital punishment as cruel and unusual punishment?

Significant problems were reported with all three of Arizona’s executions as corrections officers struggled to find suitable veins for IV lines to deliver the lethal injection. In November, all Alabama executions were put on hold for a “top-to-bottom” review of the state’s lethal injection protocol. Gov. Kay Ivey issued the order following the back-to-back failed executions of Alan Miller and Kenneth Smith.

Given the trauma associated with such errors, do the mishaps constitute grounds for a Supreme Court challenge against capital punishment as cruel and unusual punishment?

Mr. Dunham said he did not expect the current Supreme Court to accept that kind of case. He added, “I think it has less to do with cruelty than it has to do with the states having a sense that they can do whatever they want to do because the Supreme Court is not going to stop them.”

At the time of the report’s preparation, there had been 18 executions in the United States in 2022, which was the smallest number since 1991, not counting the pandemic years of 2020 and 2021. But Thomas Edwin Loden Jr., 58, was executed by lethal injection in Mississippi on Dec. 14, adding another execution to the 2022 tally and becoming only the second inmate executed in the state in 10 years. He had been convicted of the rape and murder of a 16-year-old girl in 2000.

The 22 new death sentences imposed in 2022 are fewer than in any year before the pandemic and just 4 higher than the record lows of the prior two years. It was the eighth year in a row with fewer than 30 executions and fewer than 50 new capital punishment sentences. The D.P.I.C. found that executions remain heavily concentrated in just a few jurisdictions. More than half of all executions in 2022 were conducted in just two states: Oklahoma and Texas.

Mr. Dunham said that in 2022, public opinion and civic policy continued a long-term trend away from the use of capital punishment. That was especially notable this year because of an uptick in violent crime as the nation emerged from the pandemic.

“It is hard to see these states’ pursuit of executions as anything other than an act of vengeance and a desperation to kill. In other words, simply bloodlust.”

“There’s no question that the number of homicides that we’ve seen [in 2022] has reversed a long-term trend,” said Mr. Dunham. “The conventional wisdom was that as murder rates go, so goes support for the death penalty.

“We have mentioned [declining crime rates] as a factor in the long-term decline of [support for] capital punishment.” But murder rates dropped by a third and “new death sentencing rates have fallen by close to 90 percent,” Mr. Dunham pointed out. “So there was something else that was going on.”

He believes that other overarching phenomena related to capital punishment may account for the divergence. A continuing parade of exonerations from death row; “the continuing evidence of racism and and geographic arbitrariness” in the application of the death penalty; and diminishing public confidence that courts, police and prosecutors get capital cases right in the first place have created strong momentum against the death penalty.

And recent Supreme Court decisions that allowed capital cases to proceed on technical merits, even in the face of new evidence of innocence, further degraded public support for the death penalty, he said.

The witness of religious bodies and leaders, especially Pope Francis, also contributed to the public’s growing rejection of America’s death penalty regime, he said. “Pope Francis continues to have a significant impact—the force of his personality, the force of his moral leadership, his decency and his clear statements that all humanity is to be respected. All of those have a cumulative and growing impact.”

Krisanne Vaillancourt Murphy, the executive director of the Catholic Mobilizing Network, a national campaign against the death penalty, also cited the influence of Pope Francis in an interview conducted by email, noting that in September the pope made the abolition of the death penalty his official prayer intention.

Supreme Court decisions that allowed capital cases to proceed on technical merits, even in the face of new evidence of innocence, further degraded public support for the death penalty,

In 2022, she said, the U.S. Conference of Catholic Bishops continued to speak out against the death penalty. “In states where executions are actively being carried out,” she said, “Catholic leadership has been front and center with behind the scenes and public opposition to these acts of state-sanctioned murder.”

She especially highlighted the efforts of Archbishop Paul S. Coakley of Oklahoma City “to stop the tidal wave of executions that the state of Oklahoma has threatened.” State officials in Oklahoma have signed off on a lengthy schedule that will produce one execution per month over the next two years.

According to Ms. Vaillancourt Murphy, in 2022 “over a quarter million advocacy actions have been taken through C.M.N. by Catholics across the country to advocate on behalf of individuals scheduled for execution, to urge state lawmakers to end the use of the death penalty, and to encourage national leadership to support the abolition of capital punishment.”

It has slowly become an easier case to make to the U.S. Catholic public. The growing capriciousness of the application of the death penalty in the United States, one of the reasons it had been ruled unconstitutional by the Supreme Court in 1972, seems to grow clearer each year, she said. “The vast majority of states no longer have any interest in executions,” Ms. Vaillancourt Murphy pointed out. “Nationally, 37 states have either completely outlawed the death penalty or have otherwise gone more than 10 years without an execution.”

She attributes that outcome “to a growing awareness of the systemic failures endemic to our capital punishment system—failures like racial bias, wrongful conviction, and the targeting of vulnerable populations like individuals with intellectual disabilities or histories of trauma and abuse.”

But as many states “distance themselves from the death penalty,” a handful “are insistent on bringing it back into practice,” she said. “It is hard to see these states’ pursuit of executions as anything other than an act of vengeance and a desperation to kill,” she said. “In other words, simply bloodlust.”

Looking ahead to 2023, “we will continue mobilizing Catholic opposition to executions in the outlier states,” Ms. Vaillaincourt Murphy said. “Oklahoma is a key focus area…. Other high-use death penalty states include Texas, Arizona and Missouri.”

The Biden administration declared an official moratorium on federal executions in 2021. In 2023, she pointed out, the president will have an opportunity to take stronger action by commuting the sentences of those who remain on the federal death row. “Given how swiftly the last administration restarted federal executions, it is critical that these sentences be commuted,” she said.

This report was updated on Dec. 16 to reflect an additional execution this week.