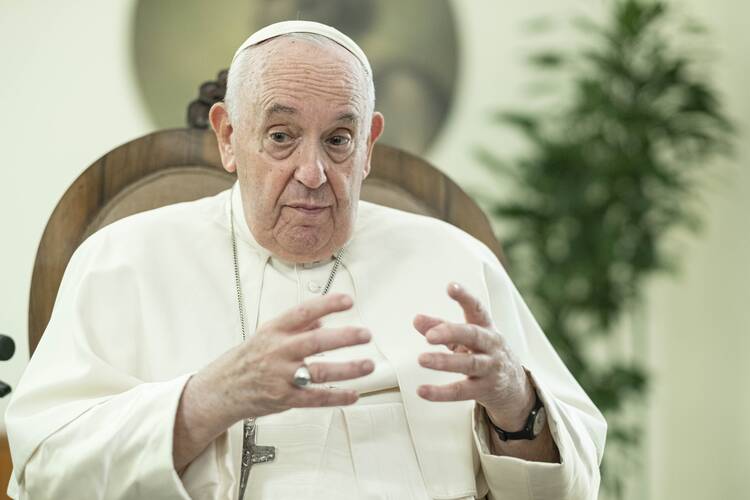 Pope Francis speaks during an interview with the top staff of America magazine at the Vatican Nov. 22, 2022. During the wide-ranging interview, Pope Francis talked about Ukraine and Russia, among other topics. (CNS photo/Antonello Nusca, America Media)

VATICAN CITY (CNS)—The Vatican has had diplomatic contact with Russia regarding comments Pope Francis made about Russian minorities being responsible for the worst acts of cruelty in the country’s war on Ukraine.

“We received a letter through diplomatic channels from the Vatican, which contains an official statement on behalf of Cardinal Secretary of State Pietro Parolin in connection with the pontiff’s aforementioned statement,” Zakharova said, according to Tass.

The Vatican letter “says, in particular, the following: ‘The Vatican Secretariat of State apologizes to the Russian side. The Holy See has the utmost respect for all peoples of Russia, their dignity, faith and culture, as well as for other countries and peoples of the world,’” Tass reported Zakharova as saying.

The Vatican has had diplomatic contact with Russia regarding comments Pope Francis made about Russian minorities being responsible for the worst acts of cruelty in the country’s war on Ukraine.

Matteo Bruni, director of the Vatican press office, told reporters, “I can confirm there have been diplomatic contacts in that respect.” He did not add other details.

In an interview in late November with America magazine, Pope Francis spoke of the “cruelty” of Russian troops in Ukraine.

“Generally, the cruelest are perhaps those who are of Russia but are not of the Russian tradition, such as the Chechens, the Buryati and so on. Certainly, the one who invades is the Russian state. This is very clear. Sometimes I try not to specify so as not to offend and rather condemn in general, although it is well known whom I am condemning. It is not necessary that I put a name and surname,” the pope had said.

Sergey Lavrov, the Russian foreign minister, had called the pope “un-Christian” for his characterization of the mostly Muslim Chechens of southwest Russia and the mostly Buddhist Buryats from eastern Siberia.

On his return flight to Rome from Bahrain Nov. 6, Pope Francis had placed the blame for most of the cruelty on “mercenaries” fighting for Russia.

“What strikes me—this is why I use the word ‘martyred’ for Ukraine—is the cruelty, which is not of the Russian people, because the Russian people are a great people, but of the mercenaries, of the soldiers who go off to war as an adventure,” the pope told reporters.