Voting Catholic: Is there a Catholic approach to gun policy? 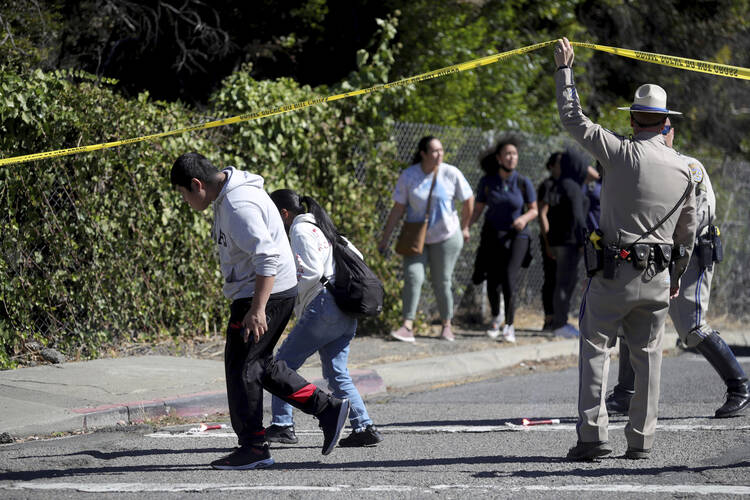 There have been more than 35,000 gun-related deaths in the United States, including 545 mass shootings and over 19,000 suicides so far in 2022. One of three all-new episodes of our podcast Voting Catholic looks at gun violence and its impact in the 2022 midterm election.

“Americans are able to buy guns in ways that most people in other advanced or highly developed nations that would be comparable to us are not able to,” Patrick McCormick, a professor of religious studies at Gonzaga University, in Spokane, Wash., told Sebastian Gomes, an executive editor at America and host of Voting Catholic. The United States has the highest rate of gun ownership in the world, and there has been a rise in the purchase of guns, adding about 40 million guns to American households in the last couple of years. The U.S. also has more gun related deaths compared to other wealthier nations.

There has been a rise in the purchase of guns, adding about 40 million guns to American households in the last couple of years.

In the United States, “gun ownership is identified with a kind of rugged individualism,” Dr. McCormick said, “But recent studies have indicated that Americans actually didn’t own guns in very high numbers in the 18th and early part of the 19th century.”

It was the gun industry, he said, wanting to keep their factories running even when the country was not at war, that worked to create a “mythology of the American west.” In part because of this marketing strategy, guns took on “a moral identity” and became “an icon” of American independence.

“It’s a dangerous theological issue to think that we can supply people with a god-like power or strength if they have this kind of weapon.”

One new factor is the Covid epidemic. “I think that there would be good reason to think that the Covid epidemic has affected us as a society by making us feel more isolated and disconnected from one another,” Dr. McCormick said. “We’ve had an experience of powerlessness and loneliness and frustration…. That’s driven people to go out and purchase guns so that they might have a sense of power or a sense of safety.”

“That’s strikingly important for a Christian to think about,” Dr. McCormick said, suggesting that it is “idolatry” to believe that “possessing a handgun will supply me with the strength and security that my reliance on God might have supplied me with in the past…. It’s a dangerous theological issue to think that we can supply people with a god-like power or strength if they have this kind of weapon.”

What dominates headlines are mass shootings, especially those with children among the victims. “The idea that a child would go into a school and they could be slaughtered just seems against everything that we want to believe about the world,” said Dr. McCormick. The same holds true about shootings in places we bring our families, including churches and theaters, making us “more likely to be afraid of a world that seems dangerous and honestly evil.”

But far more common are the individual homicides and the suicides that have increased over the past decade. Since the 2008 recession, white males in particular have shown increased rates of death from suicide, opioid use and liver damage, and these “deaths of despair” have been concentrated among non-college-educated Americans with higher risks of unemployment. “So it looks like economic factors are also playing into the increase of people turning to gun suicide and to gun homicide.”

A little more than half of all gun deaths in the United States are from suicide.

A little more than half of all gun deaths in the United States are from suicide. “Ironically, white, rural males in the United States without a college education are the most likely people, to oppose any form of gun control,” Dr. McCormick said. “What we don’t seem to pay attention to is that they are overwhelmingly the most likely people to die from [a] gun at their own hands.”

On the other hand, “young Black, urban males are the people who are most likely to die from somebody else shooting them with a gun. … So there’s definitely a racial divide on guns in America.”

How should voters consider gun policy when voting this fall? “I don’t think that [candidates] just saying ‘I’m for or against gun control’ is going to be useful,” Dr. McCormick said. “We have to push back with our politicians and ask, ‘What is it specifically that you’re recommending for us to do now?’”

He added, “We tend to divide ourselves into reds and blues, Democrats and Republicans, conservatives and progressives. I think we need to look at the common ground that we share on these issues. For example, a large number of Republicans and conservatives would support legislation focused on background checks and on providing more screening for mental health.”

Another public policy idea is liability insurance: “When you or I purchase an automobile, we have to pay insurance on that automobile in case we hurt somebody else with it. It’s not an unreasonable idea to think that if I purchase a gun, I would have some responsibility for harms or injuries or accidents or deaths that result from that.”

“Catholic teaching would say ... we do not live in a lawless society, and we ought not to behave as if we did.”

Catholic voters must relate gun policy to the concept of a common good, said Dr. McCormick. Individual gun ownership “is a sign that the civilian has faith in himself or herself as an individual agent to solve the problems of crime or violence in the society. Catholic teaching would say that the primary responsibility for addressing crime belongs to the society, to the government, to the police. We do not live in a lawless society, and we ought not to behave as if we did.

“I think the Catholic Church would also say that the underlying causes of crime and violence in society are largely social and economic and human causes. …We ought to be concerned about a society that is armed with 400 million personal guns and that doesn’t provide adequate health care for tens of millions of Americans or where millions of American children live in poverty. So I think the Catholic teaching would tell us that we’re trying to solve the problems facing us as a society with the wrong tools. We’re placing too much faith in a set of tools that are not going to get us to the common good.”

Where Guns Are Sacred

Archbishop Gustavo García-Siller of San Antonio was at a gathering of priests when he first heard about the murder of two schoolchildren—later revised to 19 schoolchildren and two teachers—in Uvalde, Tex., on May 24.

“We went to the Civic Center. There were families outside [in] the garden by themselves. They were waiting to be told. … I was able to visit with the families [inside], but they were silent. They were with their heads on the table. They were not speaking to each other.”

He scheduled Masses for every night that week: “The Mass offers a possibility of an encounter with God and with one another. And all those days, the Masses were pretty full, which means that it was answering a need of the people.”

On Voting Catholic, Archbishop García-Siller told host Sebastian Gomes, “I can say that here in Texas, arms are sacred,” and he echoed Patrick McCormick in adding, “My God, that is idolatry.”

The archbishop has called for stricter controls on gun ownership, and he said, “In many ways, I have received good feedback, but I have also received letters or emails from people [saying] they are not going to continue supporting the diocese. And even [that] ‘the church has failed us.’”

Asked what he would say to Catholic voters this year, Archbishop García-Siller responded, “I will invite people to absorb in some way suffering caused by guns. And then to say: ‘We are in the 21st century, do we need to defend ourselves from each other with guns? Why don’t we show to one another, in little ways here and there, that we can live as human beings and respect human dignity?’”

[Related: “Lessons from El Paso and Uvalde: Tragedy can change our hearts, if we let it.”]

To hear more on how American Catholics view gun violence, be sure to listen to Voting Catholic, a podcast by America Media with all-new episodes on inflation, abortion and gun violence in advance of the 2022 midterm election.