Voting Catholic: How should Catholics think about inflation when voting this fall? 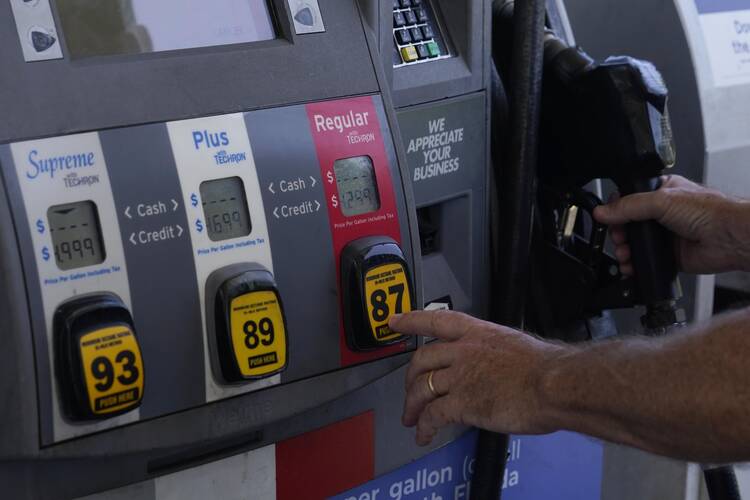 A customer pumps gas at an Exxon gas station on May 10, 2022, in Miami. (AP Photo/Marta Lavandier)

This summer, the annual inflation rate in the United States hit 9.1 percent, a 40-year high. It is no wonder that voters are ranking inflation and the state of the economy as the most important issues going into the 2022 midterm elections, with 82 percent in a September poll from Monmouth University saying that the rising cost of living is an extremely or very important issue. One of three all-new episodes of our podcast Voting Catholic looks at inflation and its impact in the 2022 midterm election.

Catherine Orr, the pastoral associate of Lumen Christi parish in the small town of Mequon, Wis., spoke with Sebastian Gomes, an executive editor at America and host of Voting Catholic. Ms. Orr and her husband, Matt, the superintendent for a construction company, have three children ranging from nine months old to 7 years old.

“I notice inflation the most with regard to gas prices,” said Ms. Orr, who explains that they need to maintain two cars in the household because Matt travels so much for work. “I easily fill up my gas tank twice a week and when you’re looking at gas prices close to $4 a gallon, that’s almost a thousand dollars a month.” But she has also noticed rising food prices.

“I easily fill up my gas tank twice a week and when you’re looking at gas prices close to $4 a gallon, that’s almost a thousand dollars a month.”

“You don’t need to have a lot of things or spend a lot of money to have a fruitful and full life,” she said, “but there are times when you want to be able to just have a little treat. How do you plan for that and budget for that in a way that isn’t going to jeopardize things that we prioritize financially, like sending the kids to Catholic school or living in a house that is secure and stable in an area that is safe?”

Asked whether the cost of living is a major topic of conversation at her parish, Ms. Orr said,

“We are very fortunate that we live in an upper-middle-class area … [but] the parish is very close to the city of Milwaukee and other parishes that do not have the same level of resources. … So we have these conversations regularly with our volunteer ministries: How is the community being impacted by this? Is there something that we can and should be doing to help alleviate others who are in a more difficult financial position?”

But first we might ask: How did inflation get so bad?

“At a very simple level, economists often say inflation is too much money chasing too few goods,” said Tony Annett, an economist at Fordham University, and the author of Cathonomics: How Catholic Tradition Can Create a More Just Economy. “So let’s look at both sides of that.”

How did inflation get so bad? “At a very simple level, economists often say inflation is too much money chasing too few goods.”

He cited the Biden administration's stimulus package, partly in response to the Covid epidemic, that was enacted in 2021. “It had some very excellent policies like the child tax credit. It had $1,400 checks to qualifying households. But some economists argue that there was too much stimulus, too much money delivered, People had too much money, which meant they spent a lot, which means prices rose.”

“Now, that’s one reason why inflation is high, but it’s actually not the main reason. … It’s [also] due to too few goods.” As we came out of the Covid crisis, Dr. Annett said, people started to buy more goods, and supply chains were not able to keep up. The war in Ukraine has also contributed to higher food and energy prices.

There are limits to what government leaders can do to bring down inflation, said Dr. Annett. The Federal Reserve can raise interest rates to bring down demand, but another major stimulus, including a tax cut, would only “add fuel to the fire of inflation.”

“This is actually what’s happening in Great Britain right now,” he said. “The new government came in and implemented massive tax cuts, which is really complicating the ability of the Bank of England to curb inflation and leading to financial problems for the British economy.”

Looking at the economy through a Catholic lens

So what does Catholic social teaching have to say about inflation at this critical moment?

“And that’s heavily related to a second principle, which is the preferential option for the poor, which from a policy perspective says we need to judge all policies first and foremost for how they affect the least among us. With inflation, that’s especially important because when inflation is being driven by high food and high energy costs, that [affects] a large share of the budgets of the poorest people in the country.”

Given these guidelines, what should Catholics be looking for in political candidates this year? “I think they should be looking for politicians who have an encompassing view of the common good, who are not wedded to the free market,” said Dr. Annett. “Because Catholic social teaching argues that you have twin rocks” to steer between in order to avoid a shipwreck. “Just as collectivism and communism [are] wrong, so libertarianism and free-market ideology lead to bad outcomes.”

“Raising interest rates will choke off aggregate demand and make it harder for firms to expand and hire workers,” Dr. Annett explained. “Some economists have said that getting inflation back down to 2 percent would lead to 1.5 million people losing their jobs, which would be a human tragedy.” That is a trade-off that Catholics must consider when casting a ballot.

Looking at the long game

Back in Wisconsin, Catherine Orr is already wrestling with these issues. “Prior to this year, I don’t think I would have really considered inflation or the economy overall as one of my top priorities,” she said. “I think maybe this year in particular, just because my youngest is nine months old and with three kids [in the family], it definitely has bumped up. I wouldn’t say it’s the top priority, but it’s definitely up there.”

Asked how she would judge government leaders on the economy, given how long it can take economic policies to have a noticeable effect, she responded, “I definitely am not an economist, and that was one of the classes at school that I definitely struggled with. However, I do know from that you do have to play the long game and you have to look at years worth of policy. … At the same time, it’s really important to look at who’s in office, what their voting record has been, because it’s really easy to listen to soundbites and not get the full picture of a particular piece of legislation.

“Once you’re able to engage in the process, you’ll start to connect the dots yourself, and you’ll see that no one person has that much power.” Congress can pass laws overnight, but “these policies take years to implement, and it takes years to feel the ramifications of them, whether positive or negative. So it is important to engage in the long game of advocacy from a Catholic perspective.”

And what is the Catholic perspective?

For complete coverage of the 2022 midterm elections from America Media, visit AmericaMagazine.org. And please consider supporting the production of Voting Catholic by getting a digital subscription to America.