How does my faith shape my approach to politics? It gives me hope. 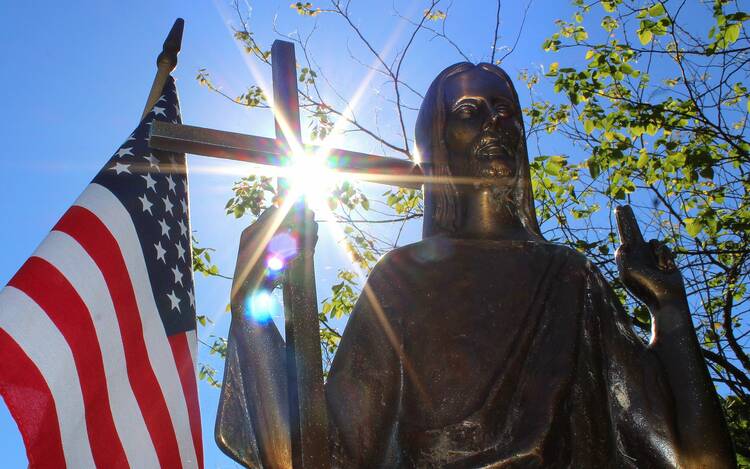 Sun shines through a statue of Christ on a grave marker alongside an American flag June 7, 2018, at St. Mary Catholic Cemetery in Appleton, Wis. (CNS photo/Bradley Birkholz)

In the course of my 10 years as editor in chief of America, I have sat on many a stage in order to address this or that pressing issue at the intersection of the church and the world. The formal talk is usually followed by some form of a question-and-answer period, the part of the program that is less scripted but no less predictable. That’s because I am often asked the same questions. Indeed, over a decade, a strikingly consistent pattern of questioning lulled me into a false sense that I was unlikely to be asked anything new.

And then I was. I was speaking to a high school audience about faith and politics. That particular topic usually prompts questions along the lines of how Catholics in general should approach politics, or how bishops specifically instruct us to approach politics. But this question was personal: “How does your faith, Father Malone, shape your approach to politics?” That stopped me cold, mainly because I really had to think about it. I don’t remember my answer—other than its stammering quality—but the question has haunted me since. I’ve given enough mental energy to it, in fact, that I have begun to formulate a better answer.... I hope.

While it is immensely helpful, even necessary, one does not need to have a specifically Christian hope in order to find any hope in politics.

As I thought about it, I quickly grasped the first obstacle: Many of the possible answers seemed to involve some eventual divorce of faith from politics, some moment when I would leave the realm of the “private” to enter the “public.” But I cannot divorce my faith from my politics any more than I could divorce oxygen from my lungs. Faith and politics are not merely complementary; they are inextricably intertwined. Each needs the other to be fully what each is meant to be. For the raison d’être of all political questions is hope that the world can change; in Christian terms, that it can be saved, that the world is, in fact, worth saving. That political hope finds its motive force in my ultimate hope, my faith in the one we call “our blessed hope,” the one who has already saved the world and thus conclusively demonstrated that it is worth saving.

Yet while my Christian hope cannot be separated from my politics, it is not therefore the only cause for my hope. While it is immensely helpful, even necessary, one does not need to have a specifically Christian hope in order to find any hope in politics. For that, we need only look to our national history. That might seem like an odd thing to say, because for many of us politics has never seemed more hopeless. Yet while our country faces enormous challenges—chief among them the odious influence of ideological partisanship—the situation is not all misery and decay. It can seem that way, for sure, but that is only because both sides of the partisan divide have one thing in common: They both think that America is going down the proverbial tubes. One side says the present is irredeemably corrupt and so looks to a mythological past for salvation. The other side, meanwhile, says our past is irredeemably corrupt and looks to some fantasy future for our deliverance.

That gives me hope—not an idealist’s fantasy, but a genuine hope—far more powerful that any partisan project, for it is born of the hard-earned wisdom of the American experience.

All the while, here in the present, the majority of the American people—good, decent people who are trying to make the most of their lives—are just getting on with it, reassured by the knowledge that past, present and future are all more complicated, more intertwined than either ideological camp suggests. Yes, our history is pockmarked by evil and injustice. Yes, many—too many—died in chattel slavery, or through economic deprivation, social sins for which we must always atone. Yes, America was often too fast with the wrong question and too soon with the right answer. There have been many Good Fridays in our long history. And yet there have been many Easters too. I think of the hundreds of thousands who gave their lives to free Black slaves from bondage; of the sons of Iowa and Kansas, and Massachusetts and Alabama, who rescued Europe from the terror of Hitlerism; of the generations of women and men, Black and white, gay and straight, rich and poor, who provided a light for others during their darkest days; of the prophets who braved hatred’s onslaught amid the terrors of the night, or in the corridors of power or on the Edmund Pettus Bridge.

I have an ultimate hope because I am a Christian. But I have hope here and now because I am also an American. I believe in the decency and wisdom of the American people. That gives me hope—not an idealist’s fantasy, but a genuine hope—far more powerful that any partisan project, for it is born of the hard-earned wisdom of the American experience: The story of a people, who, though acquainted with the night, have always rallied at dawn’s early light.