What does the Catholic Church say about cheating? 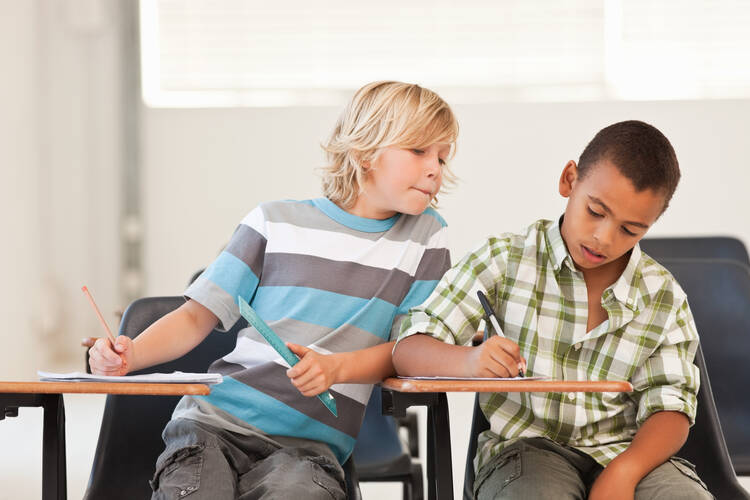 What’s with all the cheaters all of the sudden? In Ohio, two Walleye fishermen were caught wet-handed stuffing lead weights and other fish (yes, I said other fish!) into their fish to cheat out their competitors.

Just days before, I was shocked, shocked to discover cheating may have been going on during a Hustler Casino Live Texas Hold ’Em tournament in Los Angeles, and even the usually tortoise-paced world of professional chess was startled into a near eyebrow-raise by escalating suspicions that a 19-year-old American grandmaster may be a cheater, pumpkin eater as well.

It’s almost like there is something baked into American culture that encourages this sort of thing. To be fair, briefly, investigations are continuing into allegations of cheating at the poker table in Los Angeles and in the world of chess. I’d say after reviewing the unbelievable reveal at the Walleye tournament that there is no doubt that the two fishermen in question were properly hooked.

How many of us know real-world cheaters who have just plain gotten ahead, not despite their short-cutting but because of it?

The question is, how many other tournaments did they cheat their way through to get to the top of the podium (assuming they use podiums in fishing competitions)? No joke, turns out there is a lot of money involved and more than a few amateur anglers ready with pitchforks and torches.

We have been told by sages across the ages that cheaters never win, and it looks like in these recent cases that may prove true. The Ohio guys in fact barely got out of their cheating scandal alive once the other fellows figured out what they were up to.

But sadly, how many of us know real-world cheaters who have just plain gotten ahead, not despite their short-cutting but because of it? That guy who lifted answers over your shoulder in freshman year, or the other one who bought a couple of term papers that landed him in an Ivy? Still waiting for their comeuppance? Nah, they’re leading major American corporations today.

“Aquinas said a little gambling was a good thing, actually, because it contributes to ‘eutrapelia,’ the virtue of knowing how to have a little harmless fun.”

Cheating is as American as Thomas Alva Edison. Just ask the original tenants of the island called Manhattan. How long will it be before this rant is lifted off the America Media website and published, shamelessly, elsewhere? (Yeah, I’m looking at you “Catholic News” aggregators!) The Jesuit world has known its cheaters too. The Boston College basketball scandal of 1978-79 comes, painfully, to mind.

Fortunately, Catholic Americans can turn to a higher authority for guidance on cheating. The good old Catechism attends to the problem in paragraph 2413: “Unfair wagers and cheating at games constitute grave matter, unless the damage inflicted is so slight that the one who suffers it cannot reasonably consider it significant.”

[Online gambling is here. And it’s going to be a disaster for sports and fans alike.]

I guess losing more than a quarter of a million dollars in one hand of poker may be significant to some of us, but I do admire the emphasis here on “unfair wagering.” The preceding instruction notes: “Games of chance (card games, etc.) or wagers are not in themselves contrary to justice.”

My compadre James Keane, who offers no quarter to cheaters, long may he prosper, tells me: “Aquinas said a little gambling was a good thing, actually, because it contributes to ‘eutrapelia,’ the virtue of knowing how to have a little harmless fun.”

Gambling, the Catechism warns, becomes morally unacceptable when it deprives someone “of what is necessary to provide for his needs and those of others.”

So go right ahead and gamble and wager, fellow Catholics! Enter that chess or Walleye tournament! Why not both? Have some harmless fun. Shout “Bingo!” to the rafters.

It’s only when we go too far to win it all, doing an injustice to friends, family or fellow competitors, that the games and tournaments are no longer life-affirming diversions but darker exercises that gnaw away at something essential. Gambling, the Catechism warns, becomes morally unacceptable when it deprives someone “of what is necessary to provide for his needs and those of others.” A passion for gambling “risks becoming an enslavement” that offends human dignity.

The American ethos to win at all costs, get ahead at all costs, downplays such cautions, but they are worth keeping in mind whether you’re playing at the Hustler Casino (and if so, get out of there!) or around the kitchen table.

Maybe these cheating players and competitors and heads of major corporations might want to drop in on paragraph 2413 sometime. We average schmoes may not know what scam or shortcut they applied to get ahead, but they surely do. And I have bad news for them: A higher power than a tournament judge does, too.