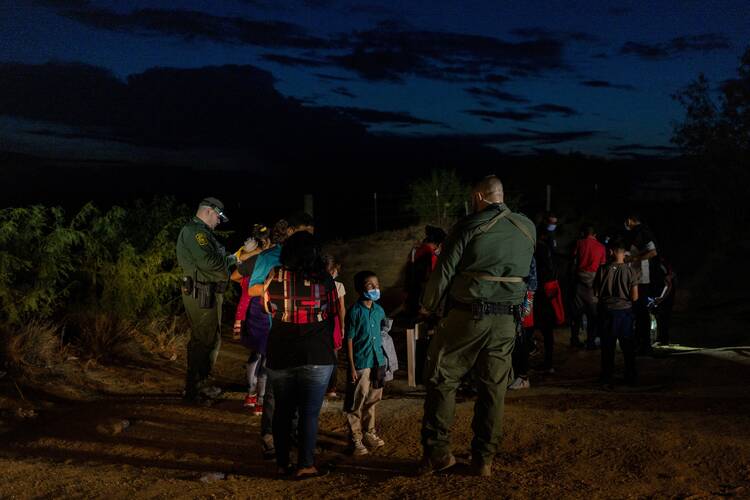 Jefferson, an 8-year old boy from Honduras, stands near his parents as he is questioned by a border patrol agent Aug. 26, 2022, after they smuggled across the Rio Grande into Roma, Texas. (CNS photo/Adrees Latif, Reuters)

When summer ended, Gov. Greg Abbott of Texas had bused around 9,000 migrants to Washington, D.C., and New York City in an expansion of the state’s Operation Lone Star initiative. That plan was launched in March last year to “secure the border” between the United States and Mexico. The Republican governor recently began sending migrants to Chicago also, another city governed by Democrats. According to the governor’s office, the initiative has also led to nearly 300,000 migrant apprehensions and more than 16,400 felony charges by Texas authorities.

“We began Operation Lone Star to do the job Washington would not do,” Mr. Abbott said on the anniversary of the initiative, praising the work of law enforcement.

In August, Cardinal Timothy Dolan of New York and Msgr. Kevin Sullivan, executive director of Catholic Charities of the Archdiocese of New York, met privately with a number of the migrants who had arrived on buses from Texas. Catholic Charities assisted 1,500 of the 6,000 migrants who reached New York by the end of August. Together with their partners, the agency has provided food, clothing and connections to other services like shelters and immigration attorneys.

“[Jesus] is the one who said to us, ‘When I was a stranger…an immigrant, you welcomed me.”

The number of immigrants coming to the U.S. southern border clearly has disproportionate effects on Texas and other border states. One pressing reason for immigration reform is to allow the burdens of migration at the southern border to be more equitably shared across the entire country.

Yet Mr. Abbott’s rhetoric about “the job Washington would not do” addresses only a small part of the moral challenge posed by immigration. When people arrive at the U.S. border fleeing violence and persecution in their native lands, all citizens, no matter their political affiliation, have a duty to care for and welcome them.

Through July, a record 609 migrants had died crossing the border. In August, a 5-year-old girl and a 3-year-old boy drowned in the Rio Grande. This summer, 53 migrants died in a tractor-trailer in San Antonio. It is unconscionable that their deaths have not generated a level of urgency to address our shattered, dysfunctional immigration system.

Those who coldly blame migrants themselves for these tragedies either do not understand the threats they face in their home countries, callously pretend that extreme poverty is not a real life-or-death issue or have so deeply dehumanized migrants that they are unmoved by their suffering.

Nativist rhetoric has once again gripped our national consciousness. A recent NPR/Ipsos poll found that half of all Americans believe the nation is experiencing an “invasion.” Backing legislation that recognizes the human dignity of immigrants and refugees is now seen as a political risk by many politicians and their consultants. Many Republicans in Congress turn up the volume on their anti-immigrant talking points, fearing primary losses. Some Democrats in competitive districts avoid addressing immigration altogether. And fear is precisely the problem. Politicians may fear losing elections, and too many citizens seem to fear migrants and asylum seekers themselves.

Nativist rhetoric has once again gripped our national consciousness.

But the people who face legitimate fears are the asylum seekers. They fear the loss of their very lives because of extreme poverty and organized crime at home.

In Central America, teenage boys are forced into gangs and young girls into prostitution. Everyone endures the chaos and violence engendered by gangs. El Salvador and Honduras regularly suffer the highest homicide rates in the world.

A long-term pledge of time and resources will be required to address properly the push factors driving migrants north, but that is a commitment Americans seem unwilling to make. While President Biden vowed to invest $4 billion in Central America to address root causes of migration, the proposal has yet to be brought to a vote in the House.

Voters, more concerned with the economy, inflation, health care and climate change, have enabled this congressional inaction. If immigrants and asylum seekers do come up in political debates, they are featured as scapegoats for rising drug overdoses and higher crime rates.

Apathy or hostility toward our migrant brothers and sisters must end. The current asylum system—undermined during the Trump administration—perpetuates an underclass of undocumented immigrants by denying equality to migrants and asylum seekers. “Better than Trump” is not adequate. While Republicans have consistently impeded progress on comprehensive immigration reform, blaming them does nothing to save lives at stake. People of good will must stand with migrants and demand more from Congress.

“Openness to one another creates spaces of fruitful exchange between different visions and traditions, and opens minds to new horizons.”

Congressional leaders certainly need to hear from their constituents, but that is not enough. To address this crisis of indifference, a conversion of heart is required.

They can also support ongoing efforts by Catholic organizations on the border, like the Kino Border Initiative, Hope Border Institute, the Humanitarian Respite Center and the work of Catholic Extension and Jesuit Refugee Service/USA.

With the threat of Covid-19 waning, parishes can host town halls and help facilitate a much-needed dialogue. These town halls may help dispel myths surrounding immigration. As noted by the Cato Institute, for example, migrants are not taking American jobs, do not exploit the welfare system and are not a major source of crime.

Families can add migrants and refugees to their prayer before family meals, recognizing that often it is migrants who grow and produce their food. Catholics can keep immigration reform in their hearts during eucharistic adoration. Individual Catholics can take to social media and share true immigrant stories and confront common myths.

“The presence of migrants and refugees represents a great challenge, but at the same time an immense opportunity for the cultural and spiritual growth of everyone,” Pope Francis said in his World Day of Migrants and Refugees message this year. “Openness to one another creates spaces of fruitful exchange between different visions and traditions, and opens minds to new horizons.”