Can school vouchers help Catholic schools fulfill their mission? Our readers weigh in. 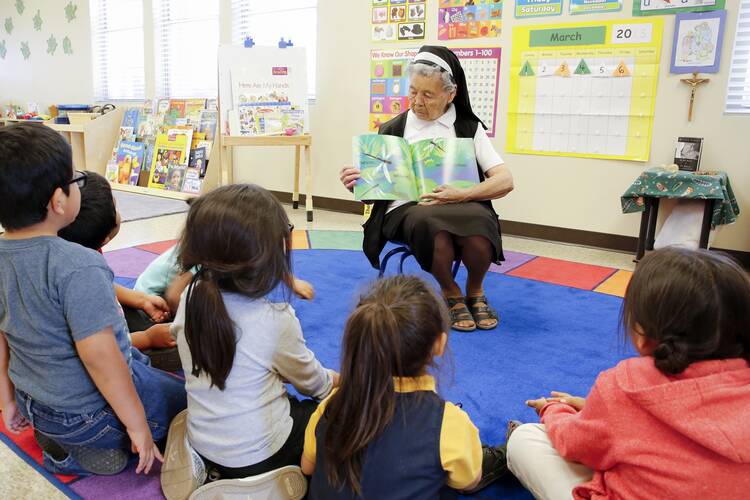 In September, all Arizona students became eligible for vouchers—approximately $6,500 each for students in grades 1 to 12 and $4,000 for kindergarten students. Arizona thus became the 17th state, along with the District of Columbia and Puerto Rico, to have a school voucher program. In the September editorial, America’s editors wrote: “Through state initiatives like Arizona’s new school program, more parents can have a real choice about where to send their children each new morning. Other states would do well to follow that lead.” Here are some of our readers’ reactions, edited for length and clarity.

This is an incredibly disappointing stance that is making me rethink subscribing to America. No taxpayer money should go to religious institutions, period. Yes, Catholic schools should do their best to provide scholarships to lower-income students, but vouchers and “school choice” are morally wrong. They do nothing to improve the quality of public schools and force taxpayers to subsidize churches.
Katie Hayes

I accept the premise of the editorial’s headline that Catholic schools cannot be reserved for the affluent. But the conclusion that taxpayers should take care of the problem is not the only or even the most obvious, optimum, or most prudent solution. This might put us Catholics further down the treacherous trail of government contracting.
Charles Erlinger

I have served as a trustee of three organizations whose philanthropic mission is, essentially, aid to Catholic schools. In the Diocese of Cleveland, pre-K enrollment in Catholic schools has increased dramatically, Catholic schools are reopening and the Cristo Rey program has been an outstanding success. In no small measure this is attributable to vouchers and the generous financial support from members of the diocese. Let the money follow the child.
John Walton

Many of those educated in the Catholic system have made enormous contributions to their communities as adults regardless of their Catholicity. I find it difficult to understand why one would not want better for every child and accept the choice of parents without penalty. In a country of this magnitude, can we not conceive of variety and choice in education? Complaints regarding the limitations of Catholic schools in serving all needs must be viewed in light of budgetary concerns. Why be so negative about a system that works so well for children, even if it does not have the capacity to serve all?
Maureen O’Riordan Lundy

I would be supportive of this if Catholic schools were required to be inclusive of all students—including those with significant cognitive and physical disabilities. These students often need extensive services—special education teachers, physical and occupational therapy, speech therapy, vision services etc., which public schools are required by law to provide. Public schools do not have the option of saying, “Sorry, we can’t provide the services your child needs,” as can be done in Catholic schools. If a school is receiving public funding, then all students should be accommodated.
Ellen McElwee

Regardless of the benefit to Catholic schools, I want public tax dollars going to public schools. Public schools are required to take all students. They teach a secular curriculum untainted by fundamentalist religious ideas. We have enough difficulty getting public schools adequately funded. We don’t need to be taking tax money away from them for any reason.
Lisa Weber

Catholic and private schools are essentially asking for public money to do the same thing public schools do, but without accountability to the public, and without having to follow the same rules. The Catholic Church is a church, not a school district. Pass on the faith in the parish where people willingly choose to be and give of their wealth.
Joseph O’Leary

I recently sat down with a good friend who attended public schools. His parents bought him a brand new Mustang convertible in high school. He told me, all these years later, that he would’ve given up the car to attend my Catholic high school. He was popular and attended a highly respected suburban public school, but he can see the long-term difference.
Ken Dillard