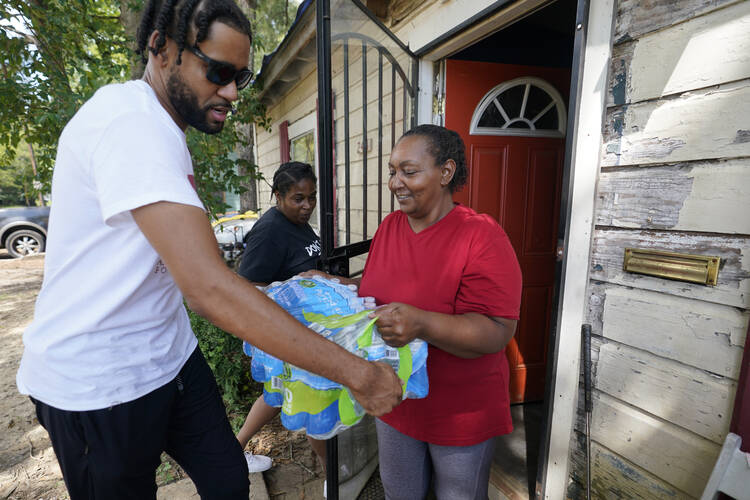 Residents of Jackson, Miss., already weary veterans of boil advisories because of the city’s faltering municipal water service, saw the system buckle altogether at the beginning of September, when heavy rains overwhelmed pumps at Jackson’s water treatment facility. Just days after the water crisis in Mississippi became national news, public works officials in Baltimore issued a boil advisory of their own when E. coli bacteria was detected in water samples from neighborhoods in the western part of the city.

It is worth trying to imagine what these tap water crises mean in practical terms for the residents of these communities. They are forced to buy or somehow get bottled water for drinking, brushing teeth and cleaning dishes. Those who can’t afford to buy water and don’t have a car to reach free distribution sites often have no choice but to use the rusty or tainted water coming out of their faucets. They can’t take showers and can’t bathe their children. Toilets can’t be flushed in communities like Jackson that have lost water pressure. In some communities where water breakdowns have occurred, boil-notice conditions have persisted for weeks and even years.

On a normal day the nation’s 2.2 million miles of underground pipes lose six billion gallons of water to leaks and breaks.

Some of Jackson’s problems are particular to that city. A freak winter storm last year caused serious damage to a system not designed to handle pipe-cracking cold. But even the weather-related damage could be symptomatic of what has become a national dilemma: “Unprecedented” storms, likely related to climate change, are expected to become more common in the near future.

The 2021 Report Card for America’s Infrastructure, released last year by the American Society of Civil Engineers, is the latest study to raise alarms about the nation’s aging water systems. Many of the oldest still rely on pipes first laid in the 19th century; thousands of others have systems built after World War II that are now exceeding their life expectancies.

How bad is it? Aside from the occasional acute crisis like Jackson, on a normal day the nation’s 2.2 million miles of underground pipes lose six billion gallons of water to leaks and breaks, the A.S.C.E reports. The engineers conclude that infrastructure improvement and replacement for U.S. waterworks have been severely underfunded for decades.

In some communities where water breakdowns have occurred, boil-notice conditions have persisted for weeks and even years.

The disasters in Jackson and Baltimore follow other notable municipal water failures. Residents in Flint, Mich., still hesitate to use tap water years after a purported cost-saving measure ended in an epic lead-poisoning disaster, discovered in 2016. Two years later, lead in the water likewise made bottled water the only safe option in Benton Harbor, Mich. Bad water, because of either lead or bacterial contamination, has also made cooking, cleaning and drinking water a challenge in Milwaukee, Newark and Detroit.

Starting to perceive a pattern?

Racism baked into complex social structures is sometimes hard to discern. And sometimes it becomes hard to ignore. In Jackson, 25 percent of the city residents live below the poverty line and 83 percent are Black, about the same as the Black share of the population in Benton Harbor and West Baltimore; 40 percent of Milwaukee residents and 77 percent of Detroit residents are Black.

The nation’s water crisis is indeed the result of poor maintenance, mismanagement and negligent planning at all levels of government, but it is hard to dismiss the impact of decades of racial redlining and the chronic misallocation of government resources based on race, politics and zip codes. The Natural Resources Defense Council found in 2019 that drinking water systems that consistently violated federal water quality standards between 2016 and 2019 were 40 percent more likely to occur in places with higher percentages of residents who were people of color. If you are Black or Latino, you are twice as likely as white Americans to be among the more than two million U.S. residents living in a home without indoor plumbing or sanitation in the first place—and 19 times more likely if you are Native American.

Historically, water and sanitation have been responsibilities that fall on local governments, and the “planning” done in the past was not dissimilar to what the nation experiences today—that is, municipal leaders lurching from one crisis to another. In the 19th century through the postwar era, that crisis management primarily resulted in water system expansions to keep up with population growth. Now many crises are the result of significant population contractions.

When representatives from largely low-income, nonwhite communities turn to state legislators for help, they often get just enough resources to duct-tape failing systems.

After steep population losses because of deindustrialization and white flight to the suburbs, many of the nation’s “legacy cities” are now contending with diminished tax bases and low-income residents struggling to pay spiking user fees for water services. When representatives from largely low-income, nonwhite communities turn to state legislators for help, they often get just enough resources to duct-tape failing systems. Though state officials in Mississippi blame local mismanagement for the city’s water problems, Jackson officials complain that they have received only a fraction of the funds they requested while infrastructure monies were distributed elsewhere.

NPR reports that two bills aimed at raising money for water system repairs in Jackson died in the Mississippi legislature last year. And in June 2020, Mississippi Gov. Tate Reeves, a Republican, vetoed bipartisan legislation that would have allowed the city to help residents settle their overdue water bills, a measure that would have provided a much-needed revenue boost to the system.

Now Mr. Reeves says that privatization or receivership of Jackson’s municipal water system are options worth considering, ignoring the evidence of recent history. Jackson officials have already partly privatized, an experiment that ended disastrously. And loss of local control through receivership was a significant factor in the disaster in Flint.

Another analysis of the crisis suggests that state and local officials in Mississippi should cease bickering and direct their attention to Washington for a long-term fix. Since the Clean Water Act of 1972, the federal government has been raising quality standards for the nation’s drinking water and wastewater treatment utilities, but just a few years later it began lowering its commitment to help pay for those mandated improvements.

Federal money to support capital improvements at municipal water systems, according to the A.S.C.E., fell from 63 percent of the government share in 1977 to just 9 percent by 2017. State and local governments have struggled over those years to bridge the funding shortfall.

The General Accounting Office reported in 2016 that water and wastewater utilities across the United States will need about $655 billion over the next 20 years to maintain, upgrade or replace aging and deteriorating infrastructure. That is too much money to expect to squeeze out of ratepayers in some of the nation’s poorest communities.

A response of that scale can only be mustered at the federal level. Americans have to stop considering bad water as just Flint’s problem or Baltimore’s problem or Jackson’s problem. It’s our problem; it’s the nation’s problem. Access to clean, life-sustaining water is a “universal and inalienable” human right, the church teaches, not a privilege based on your street address.

It is a right rooted “in human dignity and not in any kind of quantitative assessment that considers water as merely as economic good,” The Compendium of the Social Doctrine of the Church instructs (485).

The Biden administration’s Infrastructure Investment and Jobs Act marks a promising turnaround with $55 billion committed to support city water systems, but to resolve the nation’s clean water crisis that level of federal support—and more—will have to remain consistent for years to come. Perhaps clean water for all Americans should be treated as a government obligation at least as sacrosanct as a couple of line items in the $722 billion defense budget.

State governments will play a prominent role in deciding how federal money will be distributed within their borders. They should do it fairly, with an eye on the greatest need and the demand of addressing historical inequities including racism.

Clean water can’t be treated like a pay-as-you-go commodity; it can’t be surrendered to private providers who may put short-term profits ahead of long-term infrastructure needs. And rebuilding 19th- and 20th-century water systems will demand new attention to 21st-century problems, including the impact of climate change. Let’s not have to return to Jackson a few years from now to discover that its residents have to contend with yet another boil advisory.