The U.S. must do more to help the Afghan people—even if that means working with the Taliban. 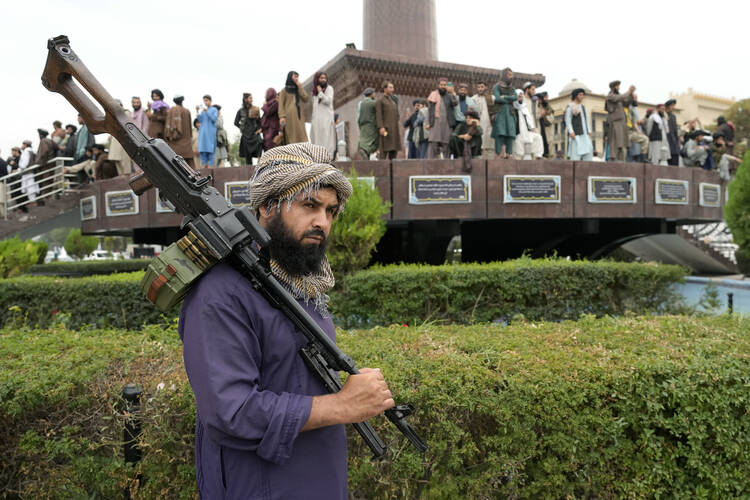 A Taliban fighter holds his weapon in front of the U.S. Embassy in Kabul, Afghanistan, on Aug. 15, 2022, one year after the Taliban seized the Afghan capital. (AP Photo/Ebrahim Noroozi)

After a sweeping, cross-country advance that chased a crumbling Afghanistan army to the capital, the Taliban returned to Kabul on Aug. 15, 2021, back in charge after a 20-year interruption sponsored by the United States. Like other imperial powers that had ventured into Afghanistan before it, the United States tried to create a nation in something like its own image and failed disastrously. By the end of last August, the U.S. military had completed an at-times chaotic and bloody withdrawal—which nevertheless succeeded in extracting 124,000 U.S. citizens and asylum seekers from Afghanistan.

Afghanistan’s new leaders attempted to portray themselves as Taliban 2.0, a more temperate version of the Islamic fundamentalist movement that had maintained an oppressive rule over the country from 1996 until dislodged by the Americans in 2001. But the upgrade failed. New Taliban has mostly governed in about the same manner as Old Taliban, clamping down on press and artistic freedom and expressions of resistance to its authority, and once again forcing women and girls into a subjugated status demanded by the Taliban’s patriarchal vision.

Since the departure of the Americans, Afghanistan’s many economic and ecological challenges have grown vastly worse. Even before the return of the Taliban, the country’s economy and financial system were weak, and a devastating drought had scorched farmland for years. The Covid-19 pandemic piled more suffering on what was already a humanitarian disaster zone.

Even before the return of the Taliban, the country’s economy and financial system were weak, and a devastating drought had scorched farmland for years.

Other problems relate to Western anxiety with the Taliban itself, including its record on human rights, treatment of women and support for Islamist terror networks like Al Qaeda. The United States, the World Bank and other Western donors that had essentially been financing the central government and public expenditures for years abruptly terminated that assistance; the national economy contracted by as much as 30 percent. More damage was inflicted by the U.S. sanctions policy and the Biden administration’s freeze of more than $9 billion in Afghanistan central bank assets.

Today, 19 million people—half the population—face acute food insecurity in Afghanistan, and the cash-based economy is near collapse. According to the World Bank, 70 percent of Afghan households have insufficient income to meet basic needs, and a World Food Program survey in June found that 92 percent of Afghans reported not having enough to eat. Widespread famine has been avoided so far, but the situation remains dire.

A relief and development specialist who works in Afghanistan—he asked to remain anonymous because he was not authorized to speak about Afghan policy—said humanitarian aid is getting through and saving lives, but average people remain imperiled. Because of the nation’s liquidity crisis, trade and finance have essentially shut down. The government, one of the largest employers in Afghanistan, is unable to pay salaries, he said, and inflation has exacerbated the daily misery.

Despite misgivings about supporting a Taliban-run government, the United States, with other large donor states, continues to offer substantial humanitarian aid. But lately that policy has been criticized by some U.S. senators worried that the Taliban are finding ways to siphon U.S. aid to suit its purposes. The possibility of more “guardrails” and restrictions on aid to Afghanistan alarms the folks on the ground distributing humanitarian aid. Will they only mean more deprivation for the Afghan people?

The possibility of more restrictions on aid to Afghanistan alarms the folks on the ground distributing humanitarian aid. Will they only mean more deprivation for the Afghan people?

Jesus said, “Feed the hungry.” He did not say, “Feed the hungry only if you approve of their governments.” The United States and other donors, in mercy, need to continue a robust humanitarian response. But international donors have to move beyond this crisis response if the widespread misery in Afghanistan is to be brought to an end.

Policies currently in place just about guarantee that the Afghan economy cannot get back on its feet. An analysis last December from the International Crisis Group found that “economic strangulation” was unlikely to change the Taliban’s behavior “but would hurt the most vulnerable Afghans.” Even a wholesale state collapse would probably not be enough to dislodge the Taliban, according to the analysis, but would compound the current suffering and likely end in another massive migration crisis in Europe.

“I’m concerned about [the Biden administration] not working with the central bank to start building out a more stable future for the Afghan economy,” the Afghan specialist told America. Cooperation between the Biden administration and central bank officials in Afghanistan aimed at releasing $3.5 billion in Afghan assets came to a halt after the discovery that Al Qaeda leader Ayman al-Zawahri had been living in Kabul. (Mr. al-Zawahri, a key plotter of the terrorist attacks of Sept. 11, 2001, was assassinated in a U.S. drone strike on Aug. 1.)

One analysis found that “economic strangulation” was unlikely to change the Taliban’s behavior “but would hurt the most vulnerable Afghans.”

He worries, too, that sanctions are discouraging funders and banks from even trying to get involved in economic development that creates trade, jobs and income—which would be essential to Afghanistan’s potential recovery. In the end, he explained, “we cannot dig ourselves out of this with humanitarian assistance alone.”

The researchers from the International Crisis Group concur: “If [donors] wish to avoid state failure and mass starvation in Afghanistan,” they said in their analysis, “the governments that battled the Taliban must decide to help state institutions provide essential services, including health care, education and a basic financial system.”

Biden administration officials say they will continue to seek a way to release frozen assets with sufficient safeguards to prevent liberated funds from being used to bankroll the Taliban. The Afghan specialist hopes that is true. “If it’s planned carefully and rolled out appropriately to support civil services and local economies,” he said, “that money could make a really big difference [in reducing hunger].”

And in the long run, he said, “we will absolutely need to interact with the Taliban.” He believes this cooperation can be managed so that it primarily serves to buttress the government and its civil service infrastructure.

Americans may see Afghanistan as a single nation, he explained, but there are significant differences across and within provinces in the enforcement and interpretation of Taliban edicts; these can be nuanced to allow development agencies to do things like keeping schools for girls open and properly equipped.

“This may sound like splitting hairs, but I do think we can reasonably discern the difference between the government of Afghanistan and the Taliban,” the specialist said. “When it comes to looking at the specific ministries involved, we can find a reasonable place of coordination where we can provide the most needed services, especially for the most vulnerable, without strengthening the Taliban.”

This approach may be a bitter pill for Americans who had been persuaded that the “democratization” of Afghanistan, a policy followed over two decades by three successive presidential administrations, was ever a reasonable expectation. But swallowing hard, facing the current realities and engaging with the Taliban may create opportunities for incremental improvements that will otherwise go unexplored while the people of Afghanistan continue to suffer.