In an apocalyptic age of polarization, Catholic leaders must not shy away from the healing language of faith. 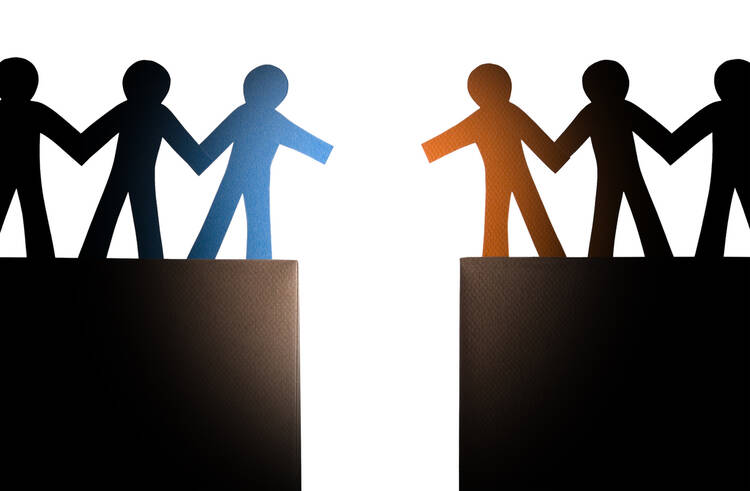 I took an unusual path to serving as a Catholic lay leader, a path that may have helped me understand the importance of Catholic leadership at this difficult moment in our history. As a youthful act of rebellion, I did not go to a Catholic university. After all, I had already received a Jesuit education from birth. My mother is a Jesuit-educated theologian and my father had been a Jesuit priest for 17 years before he left to have a family. Maybe I needed to see the world differently.

I went to a secular university near home, then off to law school at Harvard (or, as my mentor, Congresswoman Lindy Boggs, called it, “that Yankee Protestant school”). There I found myself slightly embarrassed to wear a crucifix but because of that, I made myself do it. I worried that religion was seen as ignorant, but to me, religion was intellectual. The walls of my house had been lined with books of biblical scholarship, and when my parents did not want to be overheard by the children, they spoke in ancient Greek. The idea of being lumped in with those whose religion rejects reason felt unfair to me.

From the church’s teachings on abortion to the death penalty, concern for the poor and care for the earth—none of it neatly corresponds to our current political chasms.

I also discovered the stereotype that religious people are politically conservative, something that made me dig deeper into the ways our church actually straddles the American political divide. From the church’s teachings on abortion to the death penalty, concern for the poor and care for the earth—none of it neatly corresponds to our current political chasms. Not only that, but the very roots of our teachings have begun to seem countercultural. As Catholics, we believe in making sacrifices for a common good. We believe in caring for our neighbors as brothers and sisters and in welcoming the stranger. It may seem that libertarianism has begun to triumph, but the church’s teachings stand firmly against it.

There have always been two competing instincts in American political values. Individualism drives the search for opportunity and human freedom. Just as powerfully, communitarianism defines a common good and teaches us civic virtue. A healthy balance between the two has served us well. Right now, however, unchecked individualism is trouncing our communitarian norms, poisoning our political discourse with unfettered selfishness. Even in the midst of a pandemic, when our very breath can infect others, we struggle to acknowledge that our freedoms almost always affect others. More and more of us refuse to see our neighbors as one human family, deserving of respect and dignity. We are losing the common values we need to push back against growing movements of hatred and political violence.

It may seem that libertarianism has begun to triumph, but the church’s teachings stand firmly against it.

So what does it mean to be a Catholic lay leader at this apocalyptic moment in our history, when everything seems to be falling apart? I believe it is an enormous opportunity. If we can call American Catholics back to the church’s teachings, if we can speak a language of common values that reminds all Americans of our founding principles, we might provide a spark of hope.

The language of faith is a powerful tool, often abused. But it can serve as the one beacon capable of shining through the fog of rationalization and self-interest. The leaders of the civil rights movement in the 1950s and ’60s, for example, did not just cite political values or objectives; they summoned a nation to its conscience by reminding us of the power of God’s love over hate. As Catholic leaders, we should speak ever more loudly about our own core principles—fundamental human dignity and concern for the poor and vulnerable. We should push back hard against those who define the stranger as a threat.

As a leader of a Catholic university, I try (admittedly, sometimes with trepidation) to make our institution a center of nuanced discussion of critical issues. In the Catholic intellectual tradition, I hope our institutions will demonstrate the power of intellectual curiosity and humility. I believe we can build bridges over the growing divides.

None of this will be easy. The forces pulling our country apart also divide American Catholics. In a time of absolutes, the language of nuance and humility falls flat. But as Dr. Martin Luther King Jr. reminded us, progress is not inevitable. We have to fight for it, every day.

We speak in the language of hope because we must. We follow the lessons of the Gospels because we believe. And we pray hard that we can make a difference. 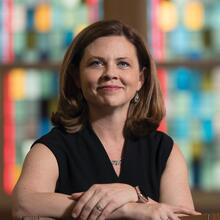 Tania Christina Tetlow became the president of Fordham University in New York in July. From 2018 until this year, she was president of Loyola University New Orleans. She is the first woman and the first layperson to hold those positions at those Catholic universities.