The church isn’t alone. Americans are losing their trust in (almost all) major institutions. 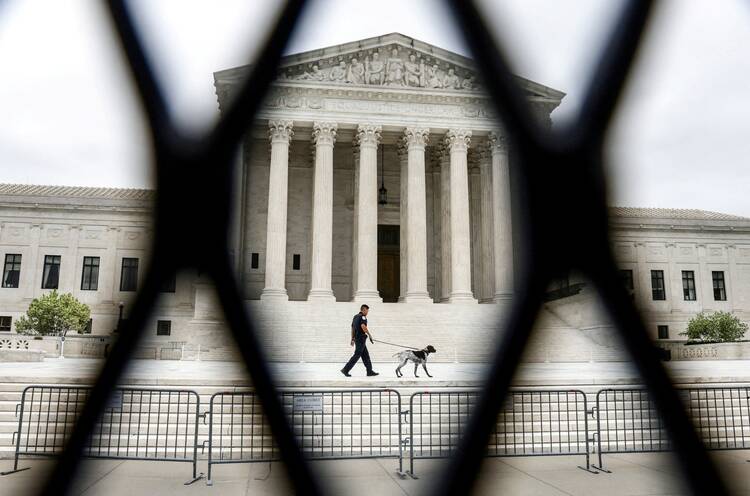 The Supreme Court is seen in Washington May 5, 2022. (CNS photo/Evelyn Hockstein, Reuters)

It’s not just you. According to a rash of new polls, Americans have come together over the belief that the country’s major institutions are seriously out of whack. But there is a lack of consensus on what to do about this crisis of trust. This gives an advantage to those who want to tear everything down rather than reform our political system and other institutions. Nothing sounds sweeter to authoritarians than citizens muttering, “Nothing works!”

Since 1979, Gallup has regularly polled U.S. adults on whether they have “confidence” in 14 major institutions, including the police, public schools and “big business.” On July 5, Gallup reported that the average level of confidence for these 14 institutions was at a new low of 27 percent—ranging from 64 percent for the military to 7 percent for Congress. (The average was 48 percent in 1979, and it hasn’t been that high since.) Since last year, declines in confidence have been sharpest for the Supreme Court, from 36 percent to 25 percent, and for the presidency, from 38 percent to 23 percent.

According to a rash of new polls, Americans have come together over the belief that the country’s major institutions are seriously out of whack.

Besides the military, the only institution above 50 percent was “small business,” at 68 percent (since this is an addition to the original list, it is not counted in the average). The only one not to fall over the past year was organized labor (but its 28 percent is nothing to brag about).

Trust in “the church or organized religion” fell from 37 percent to 31 percent, and while Gallup didn’t provide a breakdown by party, the number is presumably lower among Democrats; in another recent poll, conducted by FiveThirtyEight, a majority of Democrats (but not Republicans or independents) blamed organized religion for “driving political division” in the United States. Confidence in “large technology companies,” another addition to the original Gallup list, fell from 29 percent to 26 percent (and almost everyone blames them for exacerbating division). Even confidence in “the medical system” is down, from 44 percent to 38 percent, perhaps because of Covid and perhaps because of the reports of falling life expectancy in the United States.

Gallup is not an outlier in pessimism. In a poll released by Monmouth University on July 7, only 36 percent of U.S. adults described the American system of government as “basically sound,” down from 55 percent in a February 2020 poll and 62 percent in 1980. Among women, the figure was only 31 percent, and among 18-to-34-year-olds, it was 22 percent.

A Yahoo News/YouGov poll released in June found that 49 percent of adults thought it was “likely” that the United States will “cease to be a democracy in the future” and 46 percent thought there will likely be another civil war in this country. And in the most recent New York Times poll, only 13 percent of Americans said the country was “on the right track.”

Major institutions could take a cue from Pope Francis and begin the equivalent of a synodal process to begin an honest dialogue between citizens and administrators.

There were no significant differences by party affiliation in response to the Yahoo News questions on democracy and on civil war, but that is not necessarily a good thing. Daniel Drezner, a professor of international politics at Tufts University, told FiveThirtyEight that it can be especially dangerous to a political system when “both sides feel they’re losing” and that “populaces and countries that are pessimistic about the future often end up doing really bad things.”

At the moment, there is more fear among historians and political scientists that the right could exploit a loss of faith in political institutions to move us toward minority rule and authoritarianism. The New York Times columnist Jamelle Bouie, who has been writing regularly about “counter-majoritarian” political forces, tweeted that political conservatives see an advantage in Americans losing trust in public schools and other institutions that are supposed to bind us together: “what the right is trying to do, from top to bottom, is dismantle public goods and public obligations and the institutions that support them.”

What’s the worst-case scenario if trust in public institutions continues to drop? We could see the refusal to fund public schools and libraries; the snubbing of public health directives; a return to the cynical and corrupt patronage system to staff government agencies; and an ongoing characterization of the election process as tainted and therefore illegitimate—all moves to further weaken a sense of community and a concern for the common good. But it is not “bothsidesism” to fear that the left could also exploit widespread nihilism, either by coming up with a Trump-like demagogue of its own or by using the specter of resurgent Trumpism to justify its own restrictions on public speech and democracy.

Skyscrapers are designed to sway with the wind without toppling over. America’s major institutions must also be able to respond to waves of mistrust rather than stand firm and risk collapse. That means accepting criticism and public protest (if it is unacceptable to protest outside the home of Supreme Court justices, then we need to ensure that protests are visible from wherever the justices enter the court itself), and it means accepting serious reforms (if gerrymandering has become sophisticated enough to rig elections in any legislative body, Congress may have to consider alternatives like proportional representation).

Major institutions, including industry associations, could authorize commissions (like the Jan. 6 commission in Congress) to examine the causes of distrust. Better yet, take a cue from Pope Francis and begin the equivalent of a synodal process to begin an honest dialogue between citizens and administrators. For example, federal funds could be used to pressure every police department in America to formally solicit, and make public, the concerns of citizens (without referring to them with the military term “civilians,” by the way).

The Catholic Church has to wrestle with clericalism, and each of the entities in the Gallup poll must recognize the dangers of “institutionalism,” or the impulse to hunker down and deny that change is needed—to instead blame the crisis of mistrust on the ignorance of voters, or to conclude that the solution is better communication methods (or, worse, a tighter control of information). Those are the kinds of responses that will ensure even worse results in next year’s Gallup poll.

[Read next: “In a world after Roe v. Wade, we need pro-life Americans to preserve democracy”]