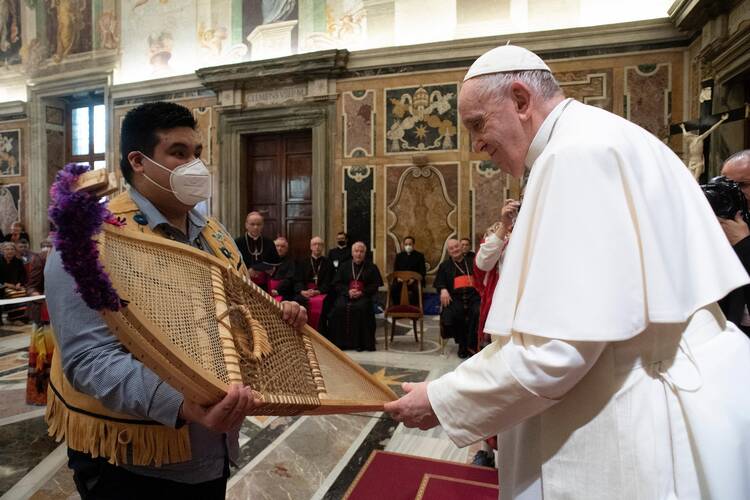 This morning, the Catholic Church in Canada released its second set of 16,000 free tickets for the Mass Pope Francis will celebrate on July 26 at Edmonton’s 60,000-seat Commonwealth Stadium.

Unfortunately, if the first release is any indication, some of these tickets will be going neither to Catholics who want to be present at a Mass presided over by Pope Francis, nor to other Canadians, but to scalpers who want to make a buck off the event. Late last week, the event’s organizers announced the problem and condemned the scalpers, saying in a statement, “It is sad and troubling that anyone would try to resell free tickets for an event with Pope Francis.” They also warned that such tickets might not be legitimate.

Scalping papal Mass tickets is not a new phenomenon. Both Philadelphia and New York saw the same thing happen in 2015; tickets to the Central Park procession were being offered on Craigslist for as much as $100,000. One New Jersey scalper insisted, “It’s the American way.”

Laryssa Waler, the spokesperson for the papal trip to Canada, said of the scalping, “People profiting off this is really disrespectful.”

And it’s not only the American way. Mexico had the same issue in 2016. So did the Vatican for Pope John Paul II’s beatification in 2011. As far back as 1989, the L.A. Times reported on scalpers in Finland asking for $160 for tickets to Pope John Paul II’s visit there. (The Canadian tickets are currently going for everything from $16 to $200.) And no doubt, the problem is much older than that.

Today, it is a difficult issue to prevent. Scalpers use automated bots that allow them to present as multiple people all at once and complete the online check out faster than human beings can. A situation like a papal Mass, in which one can obtain up to six tickets at a time without having to show identification at the gate, is custom made for scalping.

But it is also hard to fight scalping today because it is the nature of the free market to creep into anywhere that has the possibility of a transaction. Like a cancer, an unregulated capitalism mutates every relationship it touches, replacing morality with profit and loss. As Laryssa Waler, the spokesperson for the papal trip to Canada, said, “People profiting off this is really disrespectful.” But from a neoliberal economic perspective, the only things to be “respected” here are the demands of the market. Pope Francis is a compelling world figure. Of course people are more than willing to pay $200 to see him, just as they would pay to see Billy Joel or attend a Broadway show.

Every ticket scooped up by scalpers is one less ticket available to the very people that the pope is going to Canada to see, ordinary Catholics who don’t have thousands of dollars to come to Rome

Francis has repeatedly highlighted the erosion of human society and the planet caused by uncontrolled, deregulated capitalism. “Words like freedom, democracy or fraternity prove meaningless,”he wrote in “Fratelli Tutti,” in an economic system that allows those with resources to thrive while the basic needs and opportunities of others go unmet. “If a society is governed primarily by the criteria of market freedom and efficiency,” he wrote, “there is no place for such persons.”

To be clear, the church has often had problems of its own when it comes to money. Selling indulgences—that is, allowing sinners to pay to reduce their time in purgatory—helped bring on the Reformation. And the ability to get or make big donations continues to be a major source of power in the church, one that has been used at times to cover up grave sin and influence policy towards political rather than religious agendas.

But every ticket scooped up by scalpers is one less ticket available to the very people that the pope is going to Canada to see, ordinary Catholics and, in particular, Indigenous Canadians who don’t have thousands of dollars to come to Rome to attend a public papal audience. Every ticket bought by a scalper represents someone, unseen and unheard, who won’t be able to go as a result.

No doubt those who have bought scalped tickets know of people who do not have the means to attend the papal Mass, who perhaps couldn’t even imagine themselves at such an event.

In some circles today, you hear talk of “manifesting your future”: imagine what you want the future to be, and by putting that dream out into “the universe,” you help make it become a reality. In the church, we generally give that kind of talk a lot of side-eye. But there is something important and true at its foundation: We are the ones who create our future. We build our society with our actions.

If we agree to buy scalped tickets to see the pope, we reinforce the toxic dynamics within our society and participate in the further marginalization of other human beings. Maybe it seems like such a small thing. How could there be any real cost to paying for a simple ticket? But, to put it colloquially, “That’s how they get you.” Widespread social injustice, the inequities that we know as “original sin,” are rarely if ever the result of single systemic events. Instead, they are the product of an infinite number of smaller decisions that together create and buttress those injustices until we don’t even see them as such, or we come to think they’re inevitable.

Just as we can make these problems worse by our actions, there is also opportunity here. No doubt those who have bought scalped tickets know of people who do not have the means to attend the papal Mass, who perhaps couldn’t even imagine themselves at such an event. Those buyers could give their tickets to them or to a local charity. They could let the last come first, as Francis so often reminds us is our calling as Christians, and help build an entirely different kingdom. With all due respect to the pope, I would bet the cost of that ticket that being generous in this way will end up being more personally rewarding than actually attending the event.

As St. Thomas Aquinas pointed out long ago, every choice we make is a moral one. The only question is, will we choose what benefits us at the expense of others or that which reflects the graciousness and generosity of God?