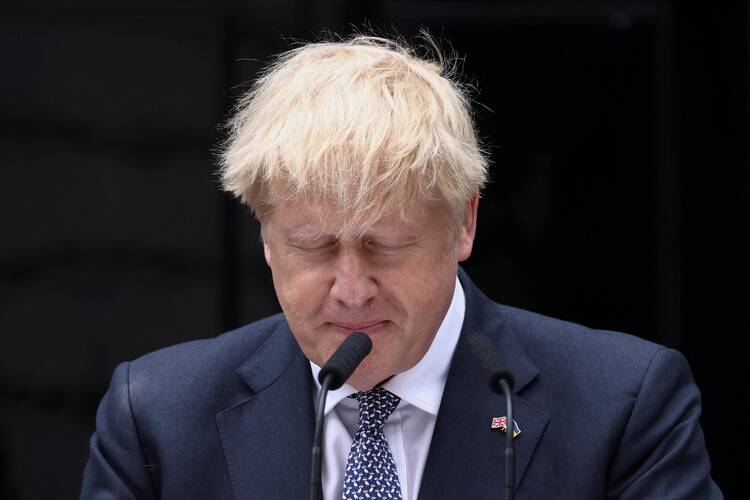 MANCHESTER, England (CNS)—Boris Johnson’s lack of “a clear moral compass” was the underlying cause of his downfall, a Catholic bishop said.

The British prime minister announced his resignation July 7 following a mutiny of more than 50 government ministers over his response to allegations that a senior member of the government had sexually assaulted two men in a London club.

Bishop Philip Egan of Portsmouth told Catholic News Service that Johnson lost credibility because he misled members of Parliament about how much he knew about similar complaints of sexual misconduct against Chris Pincher before he appointed him as the government’s deputy chief whip in February.

"The sleaze and prevarication of the last month completely undermined his authority and his resignation became inevitable.”

“He has been like (Donald) Trump—a larger than life character,” said Bishop Egan. “His big political achievement was the controversial thing of Brexit,” the exit of the U.K. from the European Union in 2020.

“To me he seemed to lack a clear moral compass, and the sleaze and prevarication of the last month ... completely undermined his authority and his resignation became inevitable,” Bishop Egan told Catholic News Service.

The bishop added the crisis should inspire the U.K. to reflect upon the values upheld by figures in public life.

“Whoever is the next prime minister needs to engage with or collaborate with faith leaders in order that we have a more intelligent and open public discussion about values—common values and moral probity,” he continued. “Catholic social teaching gives us a really good basis for that kind of discussion.”

Johnson was baptized into the Catholic faith by his late mother, Charlotte Johnson Wahl, but elected to worship as an Anglican when he went to Eton College.Johnson married his third wife, Carrie Symonds, a Catholic, in Westminster Cathedral in May 2021, and his sixth child, Wilfrid, was baptized there by Father Daniel Humphreys the following September.

The prime minister has since refused to either confirm or deny whether he has become a Catholic himself.

Johnson resisted huge pressure to resign over the Pincher affair, the second major rebellion against him by members of the governing Conservative Party this year. The first was in response to allegations that he had flouted lockdown restrictions imposed by his own government, by permitting and attending drinks parties at his Downing Street residence.

“Whoever is the next prime minister needs to engage with faith leaders in order that we have a more intelligent and open public discussion about values and moral probity.”

Announcing his resignation in Downing Street he named Brexit, the rollout of a vaccine against COVID-19 and his assistance to Ukraine in the war against Russia as his major political achievements.

He said that his message to people who voted him into power in 2019 was “thank you for that incredible mandate.”

“The reason I have fought so hard in the last few days to continue to deliver that mandate in person was not just because I wanted to do so, but because I felt it was my job, my duty, my obligation to you to continue to do what we promised to do in 2019.”

He added: “In the last few days I have tried to persuade my colleagues it would be eccentric to change governments when we are delivering so much and when we have such a vast mandate and when we’re actually only a handful of points behind in the polls.

“Of course, it’s painful not to be able to see through so many ideas and projects myself,” he continued. “But, as we’ve seen at Westminster, the herd instinct is powerful and when the herd moves, it moves. In politics, no one is remotely indispensable.”

Johnson will appoint and lead a Cabinet until a new leader is chosen to replace him.