Trump tried to break the American story. The Jan. 6 hearings let us tell it again. 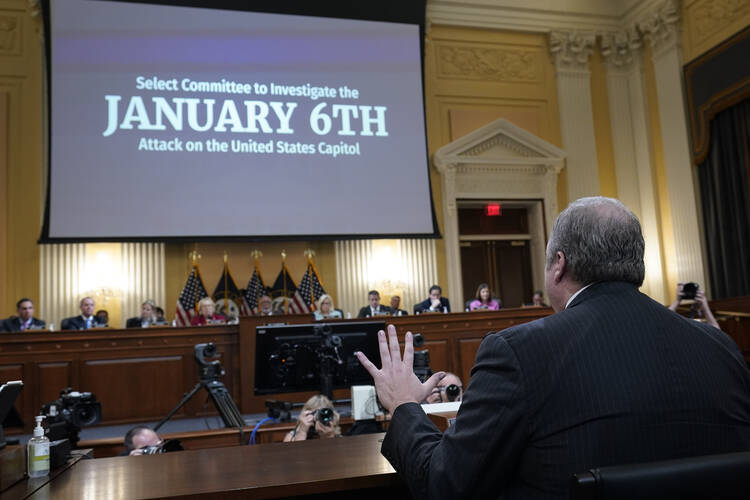 If I had to make a list of things I wanted to do last Thursday night, watching politicians put the former president of the United States on trial for his role in the Jan. 6 attack on the U.S. Capitol would have ranked near the bottom. American politics being what they are today, the whole affair seemed likely to offer just another platform for big political proclamations and no actual action.

But what I found instead reminded me of the pilot of a great Netflix crime docuseries, like “The Staircase” or “Making a Murderer.” We were immediately introduced to compelling characters, especially the two members of Congress tasked with narrating the outlines of the case—select committee chairman Bennie G. Thompson, a 74-year-old Black former school teacher from a Mississippi town of 521 people whose integrity and care for the country was evident in every soft-spoken syllable that he utters; and the vice chair, Wyoming Republican Liz Cheney, who sketched out the broad strokes of the committee’s case with clarity and dispassion.

The evening was peppered with moments of unexpectedly riveting testimony, like former Attorney General William Barr saying in a videotaped interview that he repeatedly told Donald Trump that claims of election fraud were “bull—”; or documentary filmmaker Nick Quested, who had been working on a film about the Proud Boys on Jan. 6, describing the group heading toward the Capitol hours before President Trump’s speech on the Ellipse. And a 12-minute video showed the progression of events at the Capitol without narration, allowing us to simply watch and draw our own conclusions.

One of the most striking things about the opening evening’s proceedings, in fact, was the committee’s willingness to let the testimony stand on its own.

On a television show, the first episode is like a reader’s guide. It tells us what kind of a show we are signing up for, what kind of things we can expect to see. Watch the pilot of “This is Us” and you know you’re going to see poignant, often heart-wrenching stories occurring across different generations of a family. Meanwhile, the first episode of “Obi-Wan Kenobi” makes it clear we’re in for a “sci-fi meets spirituality” adventure.

The opening hearing of the House select committee made a similar kind of contract with the American people. It signaled that the hearings would be filled with articulate witnesses, revealing testimony and a methodical, impassive approach. One of the most striking things about the opening evening’s proceedings, in fact, was the committee’s willingness to let the testimony stand on its own. While the media fixated, as usual, on the most sensational of the statements made by witnesses, the committee itself showed no impulse for point scoring or party polemics. Every piece of evidence was presented as just another element in a broader tapestry.

But watching the opening night’s proceedings, I couldn’t help wondering if they weren’t intended to be more than just a mission statement for the hearings themselves. To me, they seemed just as much an attempt to speak to the broader story of the United States. The Trump administration and the Republican legislative majority, which supported him, spent four years calling into question many of the assumptions of the American project. Most especially, they made many of us wonder whether the president of the United States and those around him were actually above the law, including the U.S. Constitution. Donald J. Trump routinely said and did whatever he wanted, whether it was prudent or dangerous, true or deceptive, legal or illegal. And right up until the moment he failed to force Vice President Mike Pence to throw out the results of the 2020 election, Mr. Trump went largely unchallenged by Congress and was never held to any sort of accountability. His presidency suggested that rather than a nation of laws and historical precedent, America is a place where power ultimately overcomes law, justice and morality.

In its opening hearing, the House select committee presented a very different vision of America. Where Donald Trump focused everything on himself, the committee chairs made a point not to put themselves at the center. Where he constantly made sensational, wild claims, the committee instead patiently presented evidence and testimony. And where Trump regularly discounted any sense of American history or precedent, the select committee’s initial presentations were notable for the broader historical context within which Mr. Thompson and Ms. Cheney repeatedly placed this case.

The opening session was an attempt to reassure us all that the American story we were taught as kids is not some fairytale that adults told us to help us sleep or to make us easier to manipulate.

In her opening statement, Ms. Cheney noted the statues of former presidents that encircle the Capitol rotunda and the paintings above that depict the earliest days of the country, including an 1824 painting of George Washington voluntarily handing control of the Continental Army forces back to Congress. Meanwhile, Mr. Thompson told the story of Abraham Lincoln’s handwritten pledge before the 1864 election that he would support the will of the voters, no matter what. “This morning, as for some days past,” Mr. Thompson read from Lincoln’s pledge, “it seems exceedingly probable that this Administration will not be re-elected. Then it will be my duty to so co-operate with the President elect.” Mr. Thompson pointed out that Lincoln also demanded the same commitment from his cabinet.

When I was in high school, I participated in a week-long mock Constitutional Congress called Convention II. One February, teenagers from all across the country came to spend a week in Washington to debate amendments to the Constitution, with a final (very cool) session held on the Senate floor.

While there were certainly divides amongst us, any sense of partisanship was quickly overwhelmed by the awe we had for the task at hand. From our earliest years in school we had all been taught to believe in the idea of America, to see in our Constitution both our highest aspirations as a people and the highest expression of democracy itself. Presidents and political figures like Lincoln, Elizabeth Cady Stanton and Martin Luther King Jr. were given to us as a kind of pantheon of American superheroes, models of what America could be. To imagine ourselves participating in that same political process was thrilling and humbling.

I have no doubt kids today are given much the same sense of story and wonder about America. And while the Trump administration cast grave doubts on that vision of our country, the select committee’s approach seems to be speaking directly to those ideals. The opening session’s nonpolemical, even-handed presentation, which has continued in the hearings since, was an attempt to reassure us all that the American story we were taught as kids is not some fairytale that adults told us to help us sleep or to make us easier to manipulate. We are still that nation that rejects tyranny and demagoguery; a country where the rule of law is paramount; and a land striving for truth, justice and an ever more perfect union, though our failures in that pursuit might sometimes be great.