‘What other studies do we need to do of dead bodies?’ Catholic leaders lament inaction on gun control 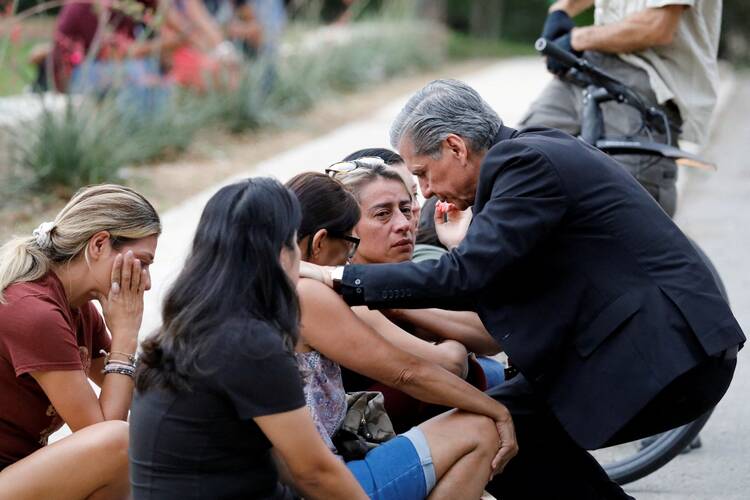 Archbishop Gustavo García-Siller of San Antonio comforts people outside the SSGT Willie de Leon Civic Center, where students had been transported from Robb Elementary School after a shooting, in Uvalde, Texas, May 24, 2022. (CNS photo/Marco Bello, Reuters)

Lamenting that Americans treat firearms as “idols,” Archbishop Gustavo García-Siller, the archbishop of San Antonio, Tex., which includes Uvalde, urged people to be “led by the Spirit” as they consider how best to respond to the ongoing gun violence plaguing cities and towns throughout the United States.

“We have a system or systems that are failing,” the archbishop said. “They’re obsolete. They’re not, anymore, what we need as a society.”

The archbishop has met with family members of the 19 children and two teachers killed by a gunman on May 24 and preached at a Mass attended by President Biden and his wife, Jill, last month. He lamented that politics has gotten in the way of helping repair systems that might make people safer and questioned those who say that more studies are needed before action is taken.

“We have a system or systems that are failing,”Archbishop Gustavo García-Siller said. “They’re obsolete. They’re not, anymore, what we need as a society.”

“We have been losing lives and children and young people and adults and elderly, in hospitals, in schools and in churches,” he said. “What other studies do we need to do of dead bodies?”

The archbishop was speaking at a panel on recent gun violence hosted by the Georgetown University Initiative on Catholic Social Thought and Public Life on June 8.

Reflecting on a shooting at a medical building in Tulsa, Okla., on June 1, that left two doctors and two others dead, the head of the nation’s largest Catholic health care organization warned that not addressing the proliferation of shootings will negatively affect medical care in the United States.

“As a result of the tragedy in Tulsa, our hospitals and our clinics are now spending more dollars to increase security,” Sister Haddad said. “Money that should be invested in patient care is being diverted to keep people from being shot in a place of healing. It’s absurd.”

“Money that should be invested in patient care is being diverted to keep people from being shot in a place of healing. It’s absurd.”

She called on elected officials to enact “sensible gun policies” and warned that not doing so would put health care workers at risk of more violence and drive up costs.

“Every time a hospital is forced to hire more security, build more security checkpoints and install more metal detectors, it’s money that’s being diverted from care and treatment of patients,” she said. “It’s a cost we end up paying, whether it’s in higher medical bills, premiums or reduction in services.”

A bipartisan group of U.S. senators are currently negotiating on where Democrats and Republicans might find common ground on gun safety legislation, and this morning, a survivor of the Uvalde shooting told a congressional committee her story about hiding from the gunman by covering herself in the blood of a classmate.

“We cannot continue to let our children do the heavy lifting,” said Judy Byron, O.P., who noted how survivors of school shootings have called on lawmakers to enact changes for years, with seemingly little success. “We have to be the adults.”

“We cannot continue to let our children do the heavy lifting,” said Judy Byron, O.P. “We have to be the adults.”

Sister Byron, the director of the Northwest Coalition for Responsible Investment, said she and other activist investors put pressure on gun manufacturers to make the weapons safer. Her group tries to pressure the companies to adopt a human rights policy and study how their business impacts human rights. She said credit card companies should also be pressured to consider how their platforms help enable the trafficking of guns.

“We really need to educate ourselves,” she said.

Speaking specifically to the May 14 shooting in Buffalo that left 10 people dead, each of them Black, the Rev. Bryan Massingale, a theologian at Fordham University, said it was essential to name that event what it was: a hate crime.

He said church leaders must be more willing to engage in the politically fraught debate over how to stem gun violence in the United States and encourage Catholics to see gun violence as a life issue.

“I think the church needs to stop being afraid of controversy,” Father Massingale said. “At this point, we need to start naming some names. We need to call out the N.R.A., and we need to talk about the influence of money in our politics.”