50 years after a group of Catholic sisters formed Network, the activist group pledges to focus on racial justice 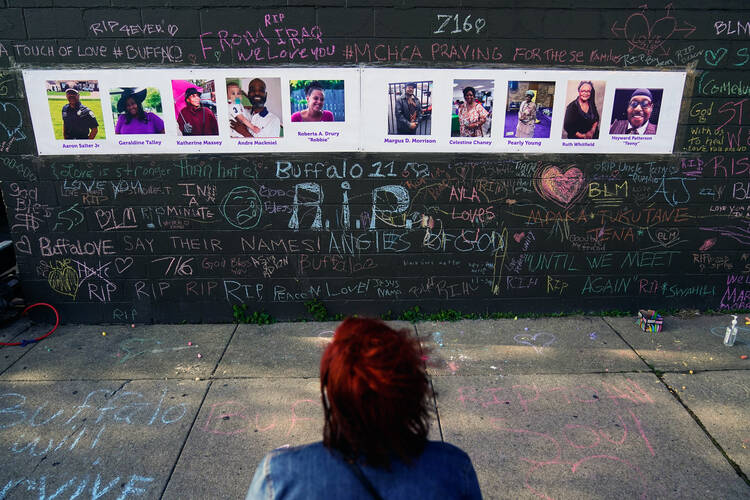 A makeshift memorial near the scene of Saturday's shooting at a supermarket, in Buffalo, on May 19, 2022, six days before the second anniversary of George Floyd's killing. (AP Photo/Matt Rourke, File)

Two years ago, when George Floyd was murdered by a police officer who knelt on his neck for almost 10 minutes, we were confonted with the persistence of racism in our country. Now, we find ourselves there once more as we mourn the shooting that targeted Black Americans inside a Buffalo grocery store. This most recent attack again raises the urgency of ending white supremacy and racist violence once and for all in the United States.

The past few years have been a time of tremendous upheaval, but it would be inaccurate to say that any of these realities are new. Systemic racism and anti-Black violence have simmered beneath the surface for many years, and addressing the persistent injustice and sin of racism is what we are called to do as Catholic justice seekers.

Throughout history, people of faith have emerged in moments of turmoil with visions for transformation, grounded in their spiritual practice. Last month, Network (which we customarily spell in all capital letters) celebrated 50 years of working for justice at the federal level. Coming at such a time of immense political and social change, our anniversary presented the Network community with a tremendous opportunity to learn from the past as we move into the future.

Addressing the persistent injustice and sin of racism is what we are called to do as Catholic justice seekers.

In 1971, on the heels of the Second Vatican Council’s groundbreaking reforms, 47 Catholic sisters gathered in Washington, D.C., to discuss engaging in political activism for social justice on the federal level. These sisters’ spirit and passion for advancing the common good ignited the spark that would become the Network Lobby for Catholic Social Justice. Since then, we have had more than 350 Catholic sisters on our board and staff, and over 100,000 religious and lay members in all 50 states advocating for just and equitable federal policies, occasionally through a campaign called “Nuns on the Bus.” Despite the challenges the sisters and their collaborators encountered over the years, Network’s political ministry has been a constant in Washington, D.C. We are honored to carry its legacy into the future while reckoning with the new realities of the world around us.

The world looks very different since Network’s founding. Every day, we can see the fraying of our social fabric. Demographic and social changes are unfolding at a rapid pace, and—partly as a result of harmful and divisive rhetoric—our country is experiencing unprecedented political polarization. However, with these challenges laid bare, we at Network can plot our course for the years ahead and know that we are responding with clarity and resolve to the signs of the times.

This clarity is a major reason why racial justice has become a central focus of Network’s mission. Members of the Network staff and board have prayerfully reflected on what our spirit-filled justice seekers have achieved over the past five decades, and the increasing urgency of creating a racially, economically and socially just world has come into focus. We recognize that the structures of systemic racism represent a deep, unhealed wound in U.S. history and that reparatory justice is necessary to find reconciliation for what Cardinal Wilton Gregory and others call America’s original sin. Until we reckon with this fact, we should not be surprised that so many people have lost trust in both our religious and secular institutions.

We have over 100,000 religious and lay members in all 50 states advocating for just and equitable federal policies, including through our “Nuns on the Bus” campaign.

The reasons for this lack of trust and breakdown of community are evident. The racial wealth and income gap continues to cause painful economic instability for too many families, while the ultra-wealthy keep getting richer. White supremacy and Christian nationalism are becoming even more blatant in local, state and federal politics. Black and brown people struggle for the right to live without constant threats to their safety and well-being. Restrictive voting laws are sweeping the nation, putting our democracy in peril. Climate change has tipped our globe into permanent crisis. These threats are real and have a disproportionate impact on communities of color.

People of faith are called to name and address these stark inequalities. We must recognize this as a moment when moral leadership is sorely needed. As an organization grounded in the principles of Catholic social teaching, Network accepts our duty to actively, and publicly, embody a commitment to racial justice and equity. We are exploring and confronting the long legacy of racism in the structures, history and expression of white Christian faith communities and organizations like our own, and we embrace the responsibility to be accountable to communities of color and all those who have been pushed to the margins of our society.

We realize that this work will not be easy, but inspired by the tenacity of Network’s founding sisters and our deep spiritual roots in the Gospel, we are determined to move forward toward justice.

This duty includes naming racism within the Catholic Church, where it is too often ignored.A poll by the Pew Research Center found that 77 percent of Black Catholics in the United States agreed that “opposition to racism is essential to what being Christian means” but only 41 percent of them had reported hearing a homily on race in the previous year. This is an inexcusable failing.

At Network’s recent virtual event with the Rev. Bryan N. Massingale, Dr. Robert P. Jones and Dr. Marcia Chatelain, the panelists named the urgency of confronting and rooting out white supremacy in American Christianity, including the Catholic Church, and centering racial justice and reparations in our political discourse. We realize that this work will not be easy, but inspired by the tenacity of Network’s founding sisters and our deep spiritual roots in the Gospel, we are determined to move forward toward justice.

As Pope Francis said in the aftermath of George Floyd’s murder, “we cannot tolerate or turn a blind eye to racism.” Now is the time to heal our society and transform our politics by prioritizing racial justice and the defense of democracy—and recognizing their intersection with so many other policy issues. This is how we must answer the call to be Catholic voices on Capitol Hill and in society today.

Justice is ablaze in the hearts of so many people who are ready to take action to honor the human dignity of every individual and commit themselves to the common good. Network Lobby for Catholic Social Justice, following in the footsteps of the sisters who founded us, is dedicated to dismantling racism, creating the beloved community and catalyzing the transformational change our country so badly needs over the next 50 years. 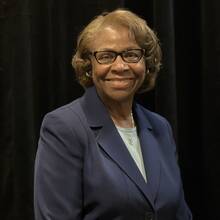 Joan F. Neal is the deputy executive director and chief equity officer at NETWORK. She is also an associate member of the National Black Sisters Conference and a board member of the Sister Thea Bowman Foundation. 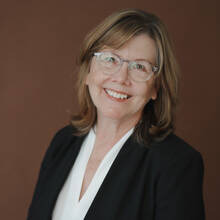 Mary J. Novak is the executive director of NETWORK, a national voice for Catholic social justice with more than 100,000 supporters across the country. She is an associate of the Congregation of St. Joseph and the founding board chair of the Catholic Mobilizing Network.