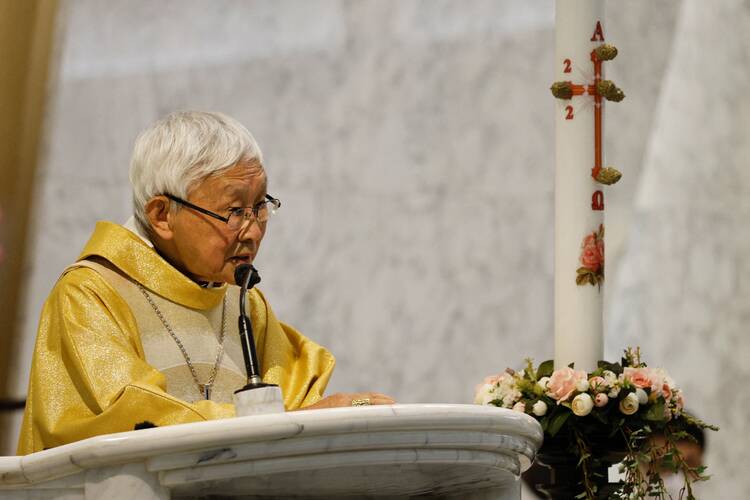 Cardinal Joseph Zen Ze-kiun, retired bishop of Hong Kong, celebrates Mass in Hong Kong May 24, 2022. May 24 is marked worldwide as the day for prayer for the church in China. (CNS photo/Tyrone Siu, Reuters)

HONG KONG (CNS) -- Cardinal Joseph Zen Ze-kiun and several others pleaded not guilty in a Hong Kong court to charges of failing to properly register a now-defunct fund to help anti-government protesters.

The 90-year-old cardinal was detained May 11 under China’s national security law for “conspiracy to collude with foreign forces,” but he has not been charged with that. Instead, he and the four others were charged with failing to properly register the 612 Humanitarian Relief Fund, set up to offer financial assistance to those involved in anti-government protests in 2019. It was disbanded last year after coming under scrutiny by authorities.

The May 24 court hearing coincided with the feasts of Our Lady of Sheshan and Mary Help of Christians, a date marked by Catholics to pray for the church in China. Later that evening, Cardinal Zen celebrated Mass for the feast.

The 90-year-old cardinal was detained May 11 under China’s national security law for “conspiracy to collude with foreign forces,” but he has not been charged with that.

All five defendants pleaded not guilty. If convicted of the improper registration, each defendant could incur a fine of about US$1,300. Their trial will begin Sept. 19.

The defendants’ arrests May 10 and 11 under the security law provoked an international outcry. The law made participating in or supporting the pro-democracy movement crimes of subversion and collusion with foreign organizations and allowed for those remanded to be extradited to mainland China. Punishment ranges between a minimum of three years and a maximum of life imprisonment.

In a statement May 12, the Diocese of Hong Kong urged “the Hong Kong Police and the judicial authorities to handle Cardinal Zen’s case in accordance with justice, taking into consideration our concrete human situation.” It said it was “extremely concerned about the condition and safety of Cardinal Joseph Zen, and we are offering our special prayers for him.”