A better abortion debate is possible. Here’s where we can start. 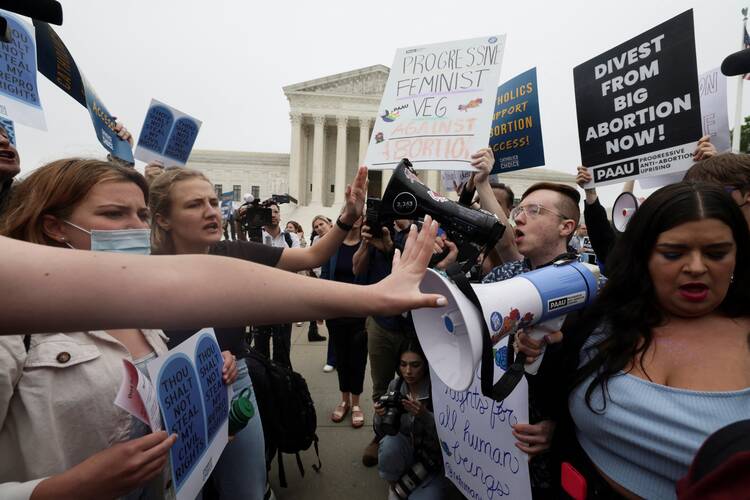 Abortion demonstrators in Washington are seen outside the U.S. Supreme Court May 3, 2022, after the leak of a draft majority opinion written by Justice Samuel Alito preparing for a majority of the court to overturn the landmark Roe v. Wade abortion rights decision later this year. (CNS photo/Evelyn Hockstein, Reuters)

In 2016, I opened my doors for what I expected would be the worst event I would ever host. In the wake of the Supreme Court’s decision in Whole Woman’s Health v. Hellerstedt, my husband and I invited about a dozen pro-choice and pro-life friends over to eat cookies and talk about abortion.

I had been part of terrible conversations on this topic, online and off-line, and I knew I wanted something different. I had friends on both sides of the divide, and it was surreal to be in a position where we all thought the other side was complicit in grave evil.

I had friends on both sides of the abortion divide, and it was surreal to be in a position where we all thought the other side was complicit in grave evil.

I ask because I want everyone in the room to see that their opponents are here as an act of trust. Even though these conversations may have never gone well in the past, the attendees at a Braver Angels debate show up because they think it is possible that disagreement can be fruitful. And the higher the stakes of the issue, the more urgency they feel to find a better way to talk about what divides us.

When I asked people to come together in my living room on that night in 2016, I didn’t rely on the parliamentary structures I use at my job; I wanted to find a way to mark this night out as different from other arguments we had had. I asked my friends to look over two readings before coming over so we would have something we all shared to ground our discussion.

The essays I chose were “Thanksgiving in Mongolia,” by Ariel Levy, and“The Empathy Exams,” by Leslie Jamison. Both authors, to the best of my knowledge, identify as pro-choice. Levy’s essay narrates her miscarriage at 19 weeks; Jamison’s essay blends her experiences as both a fake patient helping doctors in training and a real patient having an abortion. I picked these two essays because they weren’t written as salvos in the abortion debate but as attempts to reckon with what it means to care for each other.

The higher the stakes of the issue, the more urgency they feel to find a better way to talk about what divides us.

If I were making my reading list now—and if I felt I could get away with asking people to read whole books, not just articles—I’d suggest a few other works.

The first is Defenders of the Unborn: The Pro-Life Movement before Roe v. Wade, by Daniel K. Williams, a history covering the period before pro-life activism became sharply polarized. Advocating for children before birth was an important cause for progressives, who saw it as part and parcel with advocating for those who could not speak for themselves.

Another book I would recommend is The Girls Who Went Away: The Hidden History of Women Who Surrendered Children for Adoption in the Decades Before Roe v. Wade, by Ann Fessler. I picked up Fessler’s book because I wanted to know what adoption as an alternative to abortion looked like. Her interviews with mothers who surrendered their children make it clear that a post-Roe world must not be a return to pre-Roe norms. Many mothers wanted to raise their children, but they were coerced into adoption because no one was willing to support them as mothers. The partings were traumatic and created lasting wounds where there should have been families.

And most of all, I would want people to read What It Means to Be Human, by O. Carter Snead. Snead’s book on law and bioethics explores how we respond to vulnerability and dependence. It covers abortion extensively but not exclusively. Snead writes about how the logic of abortion is seeded throughout our culture, which is quick to write off the humanity of anyone in need.

When the final Dobbs ruling comes out, our conversations will be better if they are an image of hope, even when we are angry or afraid.

Each of these three books exposes what must change in tandem with abortion law to create a humane culture.

I run Other Feminisms, a Substack newsletter that aims to foster a culture that values mutual dependence instead of demanding autonomy. In the wake of the leak of the possible Dobbs opinion, I asked my readers, who span the gamut from pro-choice to pro-life,what they would ask people to read to begin a conversation.

Their suggestions were marked by the tenderness and precarity that had drawn me to Levy and Jamison. People’s biggest fear is that there is not enough care to go around. Pregnancy makes babies dependent on their mothers and mothers dependent on everyone around them. A culture that takes autonomy as the norm will neglect both mother and child. Thus, it can feel like any care for a child comes at the mother’s expense since we do not trust each other or our policymakers to respond justly to her need.

At the gathering in my living room, I do not think anyone’s mind was changed on the spot, but there were some surprising moments. Some pro-lifers were surprised by how willing pro-choice friends were to consider that a child in the womb had some moral claims, even if they did not see a way to honor them without harming women. Another moment that stuck with me was when one pro-choice attendee explained he had become a vegan a few years ago because he had concluded, “If it looks like suffering, I should err on the side of assuming it is suffering.”

He knew what the pro-life rejoinder was going to be, and the tension of being so tender with a chicken or a fish but not a fetus worried him, too. But he felt stuck. He saw suffering all around, and it felt more possible to give up meat than to give up abortion, which he considered a backstop. He had found room for a little mercy for animals, but he had trouble imagining there was enough to go around for all humans.

When the final Dobbs ruling comes out, our conversations will be better if they are an image of hope, even when we are angry or afraid. Moving a conversation from online to off-line, from public venue to private, from a large group to an intimate one—all of these make it easier to ask and answer questions honestly. Ask yourself: If I were complicit in a grave, widespread evil, what would I need to be able to recognize that, repent and avoid despair? Try to give your friends the welcome and patience you would require in order to so profoundly change your life.

Leah Libresco Sargeant is the author of Building the Benedict Option,and she runs the Substack newsletter Other Feminisms. She will be helping Braver Angels host a debate on abortion on May 19th.