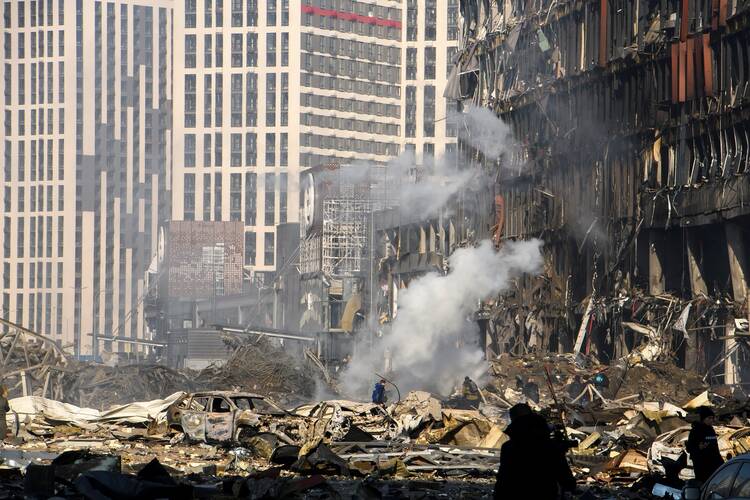 Smoke billows at the site of a destroyed shopping center after it was hit during a Russian military strike in Kyiv, Ukraine, March 21, 2022.

On Day 32 of the war in Ukraine, Pope Francis made another passionate appeal to political leaders “to understand that every day of war makes the situation worse for everyone.” He pleaded with them, “Enough! Stop the war! Silence the guns! Negotiate seriously for peace.”

He made the statement in front of thousands of people, some carrying Ukrainian and Polish flags, in St. Peter’s Square on Sunday, March 27, after reciting the Angelus with them.

On the fifth Sunday of the war Francis recalled that “a month has passed since the invasion of Ukraine, since the beginning of this cruel and senseless war, which like every war represents a defeat for everyone, for all of us.”

Thousands have been killed in the conflict, including more than 135 children. Ten million Ukrainians—25 percent of the population of the country—have been forced to leave their homes, 3.7 million of whom are now refugees in neighboring countries while 6.5 million people are internally displaced. Several cities have experienced death and destruction— in the words of Pope Francis they have “become cemeteries”—the worst of which is Mariupol where 100,000 people are trapped, without food, water or medical supplies, in a Russian siege that does not allow humanitarian corridors for them to escape or permit the delivery of humanitarian aid.

Francis again denounced the use of war as a means of settling conflicts between peoples. “There’s a need to reject war,” he said, adding that war is “a place where mothers and fathers bury their children, where men kill their brothers without even having seen them, where the powerful ones decide, and the poor people die.”

Francis said, “War does not only devastate the present but also the future of a society.” He told those in St. Peter’s Square, “I have read that since the beginning of the aggression on Ukraine one out of every two children has been displaced from the country. This means to destroy the future, to provoke dramatic traumas in the smallest and most innocent ones among us.” He denounced this as “the bestiality of the war” and as “a barbaric and sacrilegious act.”

He repeated what he has often said before, “War cannot be something that is inevitable. We must not get used to war.” He called on everyone “to convert the indignation of today into a commitment for tomorrow because if we come out of this war as before we will in some sense be all guilty.”

Francis again denounced the use of war as a means of settling conflicts between peoples.

President Vladimir Putin, who started this war, has also alluded to the possibility of the use of nuclear arms, and Russia is the country with the largest number of nuclear weapons. At the penitential service in St. Peters last Friday, March 25, Pope Francis included a prayer for the protection of the world from nuclear war. He did so in the act of consecration of Russia and Ukraine to the Immaculate Heart of Mary.

Today, he again reminded world leaders of this when he said, “In the face of the danger of self-destruction, let humanity understand that the time has come to abolish war, to eliminate it from the history of man before it is the one that eliminates humankind from history.”

He urged “every political leader to reflect on this” and “to commit themselves to this” elimination of war.

He called on the world’s political leaders to “look at the martyred Ukraine” and “to understand that every day of war makes the situation worse for everyone.”

He invited everyone to “pray again without ceasing to the Queen of Peace, to whom we consecrated humanity, and in particular Russia and Ukraine” for an end to the war in Ukraine.