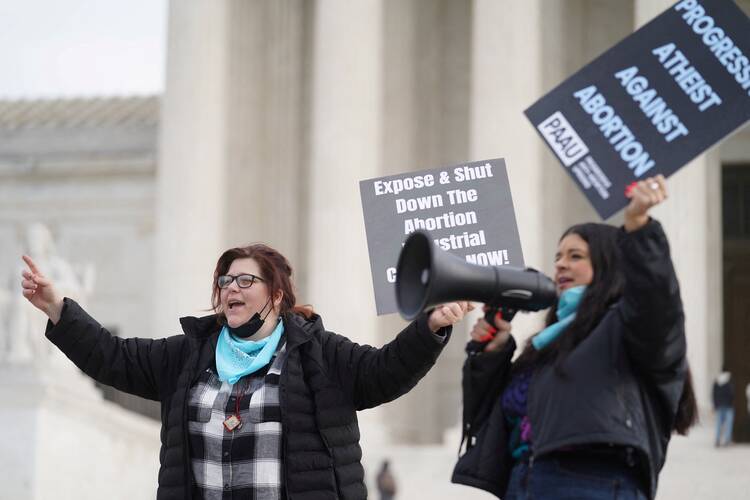 WASHINGTON (CNS) — Two members of a group called Progressive Anti-Abortion Uprising said April 5 that five fetuses taken by the police a week earlier from the Capitol Hill residence of one of the activists were “proof of illegal abortions” being performed at a Washington abortion clinic.

Activists Lauren Handy, 28, and Terrisa Bukovinac, 41, made the comments at a news conference, where they were joined by Randall Terry, founder of Operation Rescue.

The same day, a group of 23 congressional Republicans wrote a letter to Mayor Muriel Bowser and Police Chief Robert J. Contee III asking for a thorough investigation of the remains “of five preborn children” and urging they not assume—”without conducting any medical evaluations”—that “each child died as the result of a legal abortion.”

According to a Washington Post story and other news accounts, the two women described walking up to a Curtis Bay Medical Waste Services truck outside the Washington Surgi-Clinic, one of a few U.S. abortion clinics that does late-term abortions. They said they asked the driver if he had picked up anything from the clinic.

The driver told them yes, they said, so they asked for a box. “The driver asked what they would do with the remains inside,” The Washington Post reported. “After they told him they would give the (fetal) remains a funeral and bury them...the driver gave them a box.”

“The activists said they want authorities to evaluate whether any of the fetuses may have been aborted in violation of federal laws,” the story added.

“While other horrific methods of abortion unfortunately remain legal for the time being, killing a child through a partial-birth abortion is a crime under federal law,” wrote several Republican lawmakers in a letter.

The Curtis Bay Medical Waste Services has since stated that their driver did not hand over the box to the two women, according to the Post. The Washington Surgi-Clinic has not yet issued a statement.

In their letter, the members of Congress referenced photos and videotapes Handy and Bukovinac said they took of the five fetuses reportedly showing they are from late-stage abortions.

“As members of Congress, we have an obligation to conduct oversight over the District of Columbia ... to ensure D.C. upholds laws enacted by Congress, particularly those enacted to protect and uphold the sanctity of human life,” they wrote.

“While other horrific methods of abortion unfortunately remain legal for the time being, killing a child through a partial-birth abortion is a crime under federal law,” they said. “Under the Partial-Birth Abortion Ban Act of 2003, a partial-birth abortion occurs when a physician partially delivers a living child for the purpose of performing an overt act that intentionally takes the life of the child.”

“Additionally, Congress passed the Born Alive Infants Protection Act to provide equal protections for children who are born alive during an abortion,” they added.

Police said the Office of the Chief Medical Examiner currently has no plans to perform an autopsy on the remains.

The police were first alerted to the five fetuses in Handy’s apartment through an email she and Bukovinac sent to the medical examiner about them. Police took the fetuses from Handy’s apartment March 30, and the same day the FBI arrested her on federal charges for allegedly violating the Freedom of Access to Clinic Entrances Act by blocking a reproductive health center in 2020. She pleaded not guilty and was released on her own recognizance.