The racism behind the attacks on Ketanji Brown Jackson 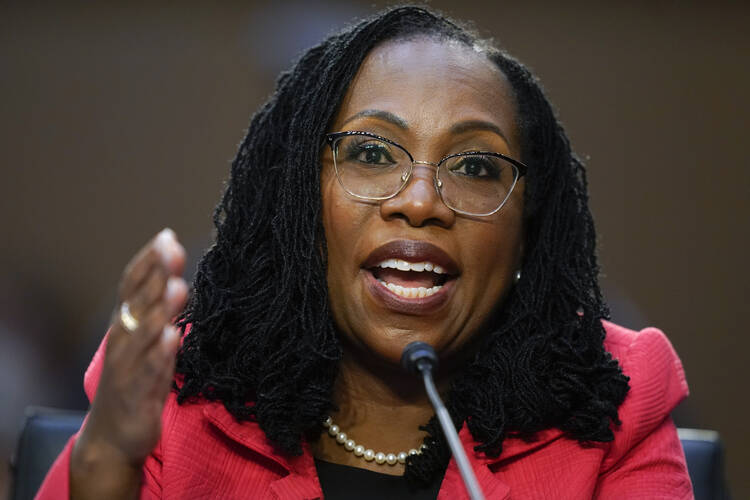 This week on “The Gloria Purvis Podcast,” Gloria speaks with Angela Onwuachi-Willig, dean and professor of law at Boston University School of Law. Professor Onwuachi-Willig is a leading scholar of law and inequality, and her research centers on race, gender, employment discrimination, affirmative action and family law. With Gloria, she discusses the nomination of Ketanji Brown Jackson to the Supreme Court and the racism underpinning the negative reaction to President Biden’s announcement that the nominee would be a Black woman.

This excerpt of the transcript has been edited for length and clarity.

Gloria Purvis: Before President Biden even identified who his nominee was, he listed how qualified the person would be and then ended his announcement saying, “And this will be a Black woman.” I have to say that I was taken aback by the negative reaction to that announcement.

Angela Onwuachi-Willig: Certainly part of the reaction from some people was just disbelief that there was any Black woman who could possibly be qualified to sit on the Supreme Court. I think President Biden was [saying]: “There are a plethora of women who are qualified to sit on this court. I could pick any one of them, and I will pick one of them and they will be amazing. They will bring a perspective that’s not represented on the court. They will add institutional legitimacy to the court.”

For some people there was just utter disbelief that somehow a Black woman would be suitable to sit on the Supreme Court.

To me, it seemed that there was no issue, no problem at all with him saying that. President Reagan had made the same comment when he appointed Justice Sandra Day O’Connor [as the first woman] to the bench. But certainly for some people there was just utter disbelief that somehow a Black woman would be suitable to sit on the Supreme Court.

GP: President Trump said, “I’m nominating a woman,” and he nominated Justice Amy Coney Barrett. And that didn’t raise any kind of rancor. And Senator Ted Cruz made the comment that [by making] the nominee a Black woman, you’re limiting it to 6 percent of the population. And I thought, wait a minute, Black women still represent the category of women. Using that logic, the only category of people who could ever accurately portray or represent women would be white women.

AO: I think you’re reading it exactly correctly. And I think there are also some other things that are a little bit disingenuous there. Everybody recognizes that these appointments, to some extent, there’s a political aspect to it. And Mr. Biden was elected to office with huge support from African American voters. Black women voters put him in office, and he was in many ways, from a political standpoint, giving a nod to a community that really supported him and who made it possible for him to be president.

The other thing is that when you’re looking at an appellate court, you’re thinking, “How do I make an appellate court where you have a diversity of voices?” The whole point of an appellate court is that you want to have a lot of really smart people who are coming together and looking at these complex legal issues from a broad range of perspectives. You want to say, “What is a perspective that’s currently missing on the court?” So President Trump might have said, “Well, we need the perspective of a conservative or right-leaning woman on the court.” He wasn’t looking at left-leaning women. He was looking at a narrow set of women. He was looking at an even smaller segment of women. I don’t know what percentage of women are actually right-leaning women in the law, but it’s got to be a pretty small percentage.

President Biden is also thinking about, “Well, what perspective is missing from the bench? What are the perspectives that would enrich the deliberations of these justices, who are deciding cases that affect all Americans?” And the perspective that is missing is one of an African American woman. And you begin to think about all the issues that affect African American women that come before the Supreme Court. It would be in many ways an injustice to continue to allow that exclusion for an additional year, even after 232 years of exclusion.

GP: A lot of my listeners and myself, we are Catholic, and there are certain issues in our faith that we have particular care about. But I’ve always thought, we’ve had other Catholic justices—I’m thinking of Supreme Court Justice Roger Taney, who ruled against Dred Scott—and no one has said that he was unqualified because he ruled in a way that is contrary to our faith. So I want to make the distinction that somebody can be qualified and have a different legal opinion on matters that are moral to us.

So many people keep saying to me, “But is [Ketanji Brown Jackson] pro-life?” I was like, “I don’t know, but can’t she also have the room to be wrong, like all the other white male justices in the history of the court, and still be qualified?”

AO: One of the benefits you’ll also see from Judge Jackson being confirmed on the Supreme Court is that it’ll be proof that Black people are not a monolith. But what I could tell you is that however she sees those issues and analyzes them will be shaped in part by her experiences as a Black woman. And those are important insights to have because the court is deciding cases that affect people, including Black people, including Black women.

One of the benefits you’ll also see from Judge Jackson being confirmed on the Supreme Court is that it’ll be proof that Black people are not a monolith.

GP: Let’s talk a little bit about why a Black woman’s perspective is so valuable.

AO: [For] some of the Fourth Amendment cases, I think it is really important to have the perspective of a Black woman, in particular a Black mother. I think a lot about policing as someone who’s a Black mother, who worries about my own children and the disproportionate way in which Black people are stopped by police, the disproportionate way in which Black people are more likely to die at the hands of police. I worry a lot about Fourth Amendment jurisprudence and the way in which it has allowed the over policing of Black people.

GP: In real simple terms, the Fourth Amendment protects us from unreasonable search and seizure by law enforcement.

AO: I’ll give you an example where I think a Black woman’s voice might make a difference. There are these things called consensual encounters. The police can stop you and ask you what your name is, ask you for your ID, ask to search your car without any reason for suspicion. And the court says [these are legal] so long as you feel free to decline the request or just end the encounter, free to walk away and leave. Now I don’t know about you, but I don’t know any Black people who feel like they can just decline a request from a police officer or walk away from them without putting their life at risk.

So from my point of view, that is a legal fiction. The idea of a consensual encounter did not take into account the realities of Black people; the justices who voted for that were all white justices. I don’t think they ever thought about that. Would we have something like a consensual encounter if there had been a Black woman on the bench who was explaining those kinds of thoughts?

I don’t know any Black people who feel like they can just decline a request from a police officer or walk away from them without putting their life at risk.

And it reminds me kind of when Justice Thomas was asking questions in a case called Virginia v. Black, which involved a statute that allowed for criminal punishment for people who were burning crosses on lawns. Justice Thomas was arguing that burning a cross is not expression. It’s not speech, it is conduct, because it was simply meant to terrorize people. He asked this question during oral arguments, and the minute he asked this question, you began to see a shift in how people began to ask their questions. They didn’t ultimately adopt his view, but you can see that it shaped the opinion.

Another situation is affirmative action. [Judge Brown Jackson is] coming to the case as a Black woman who was at the top of her class, who excelled—who told her counselor that she’s thinking about going to Harvard, and her counselor says, “Don’t set your sights too high.” That’s an important insight to have.

GP: I welcome having a perspective of a Black woman, but how do we answer the objection that it’s not fair to white men?

I would also say that again, when you’re talking about what makes an appellate court strong—what makes it good is diversity. There is an overrepresentation of white men on the court. When we’re talking about a court that is making decisions that affect the lives of all people who reside within the United States, there’s an over representation of people who bring that lived experience to the bench. We know that people’s lived experience shapes how they read cases, how they read briefs, how they understand the law. And there isn’t that perspective represented by Black women. I don’t see how that is unfair when you’re talking about a court that is strengthened by diversity.