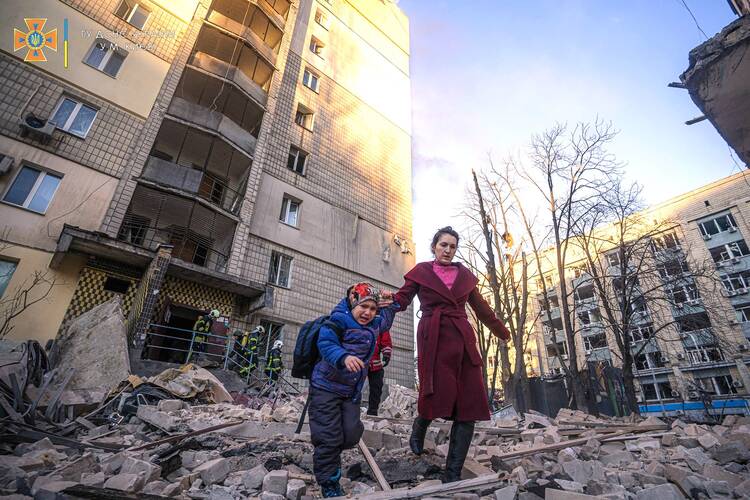 A woman with a child evacuates from a residential building damaged by Russian shelling in Kyiv, Ukraine, March 16, 2022. (CNS photo/State Emergency Service of Ukraine handout via Reuters)

The St. Nicholas Cathedral School, located in Chicago’s Ukrainian Village, has welcomed eight students who have left Ukraine since Feb. 24, when Russia invaded Ukraine, according to Block Club Chicago. Annually, about two new families from Ukraine join the school, where 80 percent of students identify as Ukrainian. But administrators say they could accommodate about 50 more.

Students, faculty and staff have made a concerted effort to show support for Ukrainians resisting the invasion since fighting began last month. The younger students are celebrating their Ukrainian heritage while the middle school students are engaged in conversations about war and peace, said Anna Cirilli, the school’s principal.

Many of the students have family and friends living in Ukraine and are dealing with the reality that their loved ones have been displaced as they try to escape violence, sometimes living in bunkers. The school has brought in a crisis counselor to help students work through their feelings, and each day, a prayer for peace is read over the loudspeaker.

The St. Nicholas Cathedral School, located in Chicago’s Ukrainian Village, has welcomed eight students who have left Ukraine since Feb. 24.

Earlier this month, faculty and students gathered in the chapel for a special liturgy and hung yellow and blue ribbons on trees and fences, representing the colors of the Ukrainian flag. Students also held a candlelight vigil, inviting members of the community to join them in a prayer for peace.

Days after the invasion began, Chicago’s archbishop, Cardinal Blase Cupich, visited St. Nicholas Cathedral, where many of the school’s students attend Mass. He addressed those students in his remarks.

“This moment is about the territorial integrity of a nation, the ability of a country that has enjoyed democracy for 30 years to continue in self-determination and the rights of people to select their own government,” the cardinal said. “But, young people, this is also about you, because this moment is an opportunity for the whole world to reflect on what kind of world we want to leave to future generations.”

The U.S. Conference of Catholic Bishops released a statement on Wednesday calling for an “immediate cessation of Russia’s armed aggression and unprovoked war on Ukraine.” In addition to calling on Catholics to pray for an end to the war, the bishops also urged the U.S government to step up its humanitarian aid.

“Young people, this is also about you, because this moment is an opportunity for the whole world to reflect on what kind of world we want to leave to future generations.”

“We call on all Americans to contribute generously and sacrificially to Catholic and other humanitarian agencies supporting these efforts,” the statement said.

And on Friday, Pope Francis denounced the “perverse abuse of power” on display in Russia’s war in Ukraine and called for aid to Ukrainians, who he said had been attacked in their “identity, history and tradition” and were “defending their land.”

The pope’s comments, in a message to a gathering of European Catholic representatives, marked some of his strongest yet in asserting Ukraine’s right to exist as a sovereign state and to defend itself against Russia’s invasion.

More than three million people in Ukraine have been forced to leave their homes during the past three weeks, according to the United Nations Refugee Agency. The Biden administration is discussing ways to welcome more Ukrainians to the United States, such as by allowing individuals with family already living here to gain access to the country.

Pope Francis denounced the “perverse abuse of power” on display in Russia’s war in Ukraine and called for aid to Ukrainians.

Throughout the United States, local Catholic communities with ties to Ukraine are hosting fundraisers, holding prayer vigils and trying to show solidarity as the violence mounts.

A parish in suburban Philadelphia raised more than $3,000 to contribute to the Ukrainian Catholic Archeparchy of Philadelphia’s efforts to purchase and ship medical supplies to Lviv, in western Ukraine. Representatives from a local Catholic Charities agency presented at a special summit called by Governor Mike DeWine of Ohio on Thursday, explaining to the local community how nonprofits help facilitate the settlement of new refugees. And a Ukrainian Catholic church in Florida collected toiletries and other items needed to help displaced people.

Back in Chicago, to help the new students arriving at St. Nicholas, the school launched a fundraising and donation campaign, asking the local community for clothing, school supplies and gift cards. Financial donations were being collected to help cover tuition costs. The campaign launched on Monday, and by Wednesday, school officials said they were overwhelmed by the response.

Sophiya Kovalchuk arrived to the U.S. from Ukraine four years ago. Today she is an eighth-grader at St. Nick’s, and she told Block Club Chicago that she sympathizes with the challenges facing the new students.

“We are organizing all the things for them so they can just take it, because I know it’s really stressful coming into a new country,” she said. “You don’t know the language, and you don’t know where to go.”

With Christians engaged in the 40-day period of Lenten fasting, penance and almsgiving, Ms. Cirilli said the school community is figuring out ways to help people suffering in Ukraine.

“We’re finding the right vehicle for helping because with the banks being closed and without knowing what exactly can actually make it to Ukraine, we feel sort of helpless,” she said.

But Ms. Cirilli said the parents of the school’s Ukrainian-American students speak honestly and regularly to their children about the history of Ukraine and its challenges, so she is confident that the students will continue to process the news with poise.

“They understand what we have to be thankful for,” she said.