The outpouring of support for Ukraine is a great thing. Can we show the same compassion for victims of other global crises? 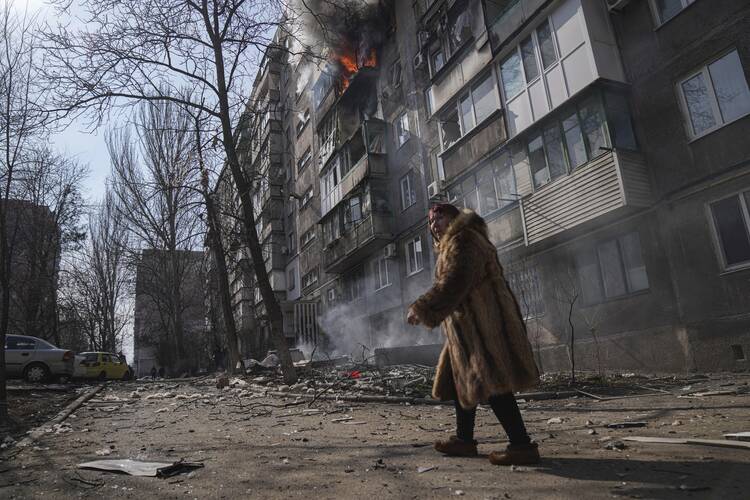 The plight of Ukrainian refugees has properly evoked the sympathy of people around the world. More than 3.1 million have already fled, and United Nations and European Union officials expect two to three million more Ukrainians in the coming weeks to seek to escape the violence of the invasion by Russia.

It has been heartening to see the outpouring of support and concern from European states, particularly those along Ukraine’s western border. Poland has assumed the greatest role, currently hosting more than 1.9 million refugees, turning its border into a staging zone for relocation and resettlement throughout Europe.

The European Union has essentially thrown open its doors to all Ukrainians escaping the war, including non-citizens from other nations who had been studying or working in Ukraine when the violence erupted on Feb. 24. ​​The unanimous adoption of its Temporary Protection Directive will provide status, work authorization and social service to Ukrainian refugees and displaced persons for up to three years.

Is it bad form to observe amid this laudable rush of mercy and compassion that Russian bombs were falling as indiscriminately on women and children in Syria—and still are?

Ireland has already accepted 5,500 Ukrainian refugees and has lifted all restrictions on Ukrainians, allowing entry without visas, connecting incoming Ukrainians to the Irish health care system and other social benefit programs and granting them the right to work. The government has agreed to accept as many as 100,000 Ukrainians. After criticism of its slow initial response, officials in the United Kingdom declared on March 14 that there would be “no cap” to the number of Ukrainian refugees who could live with U.K. host families.

Even countries once notable because of structural hostility to migrants, like Hungary and Poland, which have opposed “responsibility sharing” among European states for other refugees, have pivoted sharply since the Russian invasion of Ukraine began. Images of injured pregnant women emerging from the ruins of a maternity hospital in Mariupol and much more, documenting the savagery of the Russian assault, have prompted the open arms policy across Europe.

Is it bad form to observe amid this laudable rush of mercy and compassion that Russian bombs were falling as indiscriminately on women and children in Syria—and still are? That refugees from Syria, Afghanistan, Iraq and a crowd of other Middle Eastern and African states where noncombatants have been and remain at mortal risk have not been welcomed in recent years as Ukrainians have been this week? It is perhaps understandable for Europeans to feel more intensely about the devastation being visited on a continental neighbor, but is it legal or right to accept apparently race- and ethnicity-based discrimination in the treatment of desperate people?

As the Russian war on Ukraine continues, the United States may soon feel the sting of the same hypocrisy and contradiction. The Biden administration has been caught in a bind of its own making at the U.S.-Mexico border this week, where asylum seekers from both Ukraine and Russia have begun appearing.

Invoking Title 42 at the border has meant turning back thousands of migrants in recent months and this week it meant doing the same to a Ukrainian family seeking recognition of their refugee status.

International law on the treatment of refugees was codified under a United Nations Convention in 1951 and a follow-up protocol in 1967. As a signatory of the 1967 protocol and through standards established under U.S. immigration law in the spirit of U.N. conventions, the United States has accepted legal obligations to provide protection and assistance to refugees—either from abroad as resettled refugees or appearing at U.S. borders as asylum applicants. But like other nations seeking to manage the realities of migration, the United States has tinkered around the technical and moral edges of those legal obligations.

Title 42 is a previously little noticed clause in the U.S. health code, weaponized by the Trump administration, then embraced and expanded by the Biden administration. It allows immigration officials to bar or expel migrants without allowing them to appeal for asylum under the pretense that they represent a health risk because of the Covid-19 pandemic.

But the intention of the policy appears less about containing Covid-19 than halting asylum claims as much as possible to prevent the administration from appearing soft on immigration before the 2022 and 2024 elections. Invoking Title 42 at the border has meant turning back thousands of migrants in recent months—more than 1.6 million since March 2020—and this week it meant doing the same to a Ukrainian family seeking recognition of their refugee status. That decision was quickly reversed by embarrassed officials, a political theater that indicts the entire Title 42 regime.

Ukraine migrants already in the United States were granted Temporary Protected Status on March 3, allowing them to remain and work in the United States because it is unsafe for them to return to their home country. That move was welcomed by U.S. bishops who suggested even more must be done to equal the need.

In a statement released on March 4, the U.S. Conference of Catholic Bishops called on the Biden administration and Congress “to ensure that the U.S. Refugee Admissions Program receives all necessary resources to reflect our country’s true capacity for providing refuge and welcome.”

Expressing a welcome broad enough to reflect that true capacity means a lot more than making awkward exceptions exclusively for Ukrainians fleeing a modern Herod. Human suffering crosses all ethnic, racial and political borders. Efforts to alleviate it must do the same.