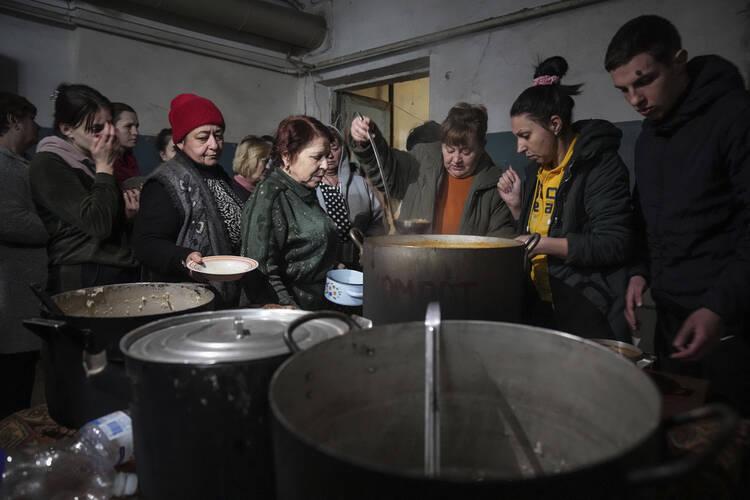 People line up to receive hot food in an improvised bomb shelter in Mariupol, Ukraine, on March 7, 2022. (AP Photo/Evgeniy Maloletka)

On March 3, a succession of Russian airstrikes leveled a small village near the Ukrainian-Russian border. It was not a matter, in the sanitized language of military law, of “collateral damage.” According to CNN, there was no military institution nearby, nor did observers report any Ukrainian army unit in the neighborhood that may have been legitimate targets of attack.

Like the attack on Guernica in the Spanish Civil War, the bombardment of the village was a terror attack pure and simple, aimed to put fear in the hearts of the Ukrainian population, an act outlawed by international humanitarian law. Alas, the attack was just one in a host of strikes against civilian targets that day, also in other villages, suburbs and cities including Kharkiv, Kherson, Mariupol and Kyiv. Apartment blocks, hospitals and schools have been the objects of direct attack. As in Grozny, Chechnya, in the 1990s and in Aleppo, Syria, in 2016, the Russian strategy (actually the Putin strategy) is to bomb people into submission.

The editors of America have asked me whether the Ukraine war is one where the international doctrine known as the “responsibility to protect,” or R2P, might apply as a remedy for this savagery. Yes, it does, because Ukraine needs assistance in protecting its citizens, but it probably does not apply in the direct sense of armed military intervention to rescue those threatened civilians.

Ukraine needs assistance in protecting its citizens, but probably not in the direct sense of armed military intervention.

When it comes to direct military intervention, however, R2P requires the applications of what international humanitarian law terms “precautionary principles” before resorting to the use of force. Like the principles of proportionality and prospect of success in the just war tradition from which they are drawn, the precautionary principles weigh against intervention when military engagement has a good chance of increasing the harm brought about by the conflict. This is the kind of consideration NATO and the United States have undertaken in declining to enforce a no-fly zone over Ukraine, judging that the risk of widening the war and possibly escalating it to a nuclear conflict does not justify military intervention.

[Related: Just war theory and Ukraine: Why military action against Russia is justifiable]

While further military intervention may be ruled out, the world community has nonetheless intervened in a variety of ways in Ukraine through the application of economic, financial and diplomatic sanctions. In addition, in various venues the international community is demanding judicial accountability. Thirty-nine countries have requested the International Criminal Court to undertake investigations, and the I.C.C. prosecutor has begun building the case against Russian atrocities. The United Nations Human Rights Council has ordered its own investigation of charges of genocide, crimes against humanity and war crimes. Under R2P doctrine, both economic sanctions and prosecution count as forms of the responsibility to react.

While armed remedies for preventing civilian atrocities are limited, the first phase of R2P, the responsibility to prevent, may still hold opportunities for involvement—for example, through support for refugees by securing humanitarian corridors and safe zones. Evacuating vulnerable civilians will probably be best done by the U.N. and voluntary humanitarian agencies, but governments can do their part by providing financial, material and in some cases logistical support for these efforts.

Plenty may remain to be done under R2P in terms of prevention, and much more will remain to do to restore a victimized society when armed conflict has ended.

Both Western governments and international agencies will also have roles to play in integrating refugees into host societies, as well as eventually facilitating their return to Ukraine when the conflict has ended. The United States has also pledged $38.6 million in humanitarian aid, which Congress is expected to augment in the weeks ahead. In addition, the U.S. Agency for International Development is assisting U.N. agencies in positioning relief supplies throughout Ukraine.

Aiding the return of refugees will be part of the last phase of R2P, the responsibility to rebuild, consisting of recovery, reconstruction and reconciliation.

R2P is just one of the innovations in the last 40 years to constrain the damage done by war and to protect civilians in wartime. While war has not been effectively outlawed, as Oona Hathaway and Scott Shapiro have shown in their book The Internationalists, in recent decades much has been done under international law to limit the sorts of damage done by war and to protect civilians and other noncombatants. These measures include the landmines treaty, the cluster munitions ban (which Russia is reported to have violated in Ukraine, but which neither Russia nor Ukraine has signed) and the Treaty on the Small Arms Trade.

Nonetheless, the civilian toll in war remains very high, and more than 95 percent of casualties in recent conflicts around the globe are civilians. And the Russian way of war under Vladimir Putin, in Chechnya and Syria and now in Ukraine, ignores the constraints mentioned above. What remains is judicial accountability in the I.C.C., in the International Court of Justice and under the doctrine of universal jurisdiction through national court systems, remedies that emerged mostly in the last three decades.

Finally, R2P is a doctrine for exceptional situations, when states and the international system either fail or positively violate their primary responsibility to protect and uphold the rights of citizens. Ordinarily, under the U.N. charter, Ukraine should be an issue of peace enforcement. But the Russian veto in the Security Council precludes such a response. It was clear from the General Assembly debate that the Russian aggression has revived the commitment among the majority of member states to the U.N. Charter and the values that undergird it. While that solidarity remains, steps must be taken for U.N. reform to curb Russia’s Security Council veto, and, failing that, to significantly increase the organization’s peacekeeping capacity.

[Related: 10 ways to avoid a devastating war in Ukraine]