Afghan refugees find welcome at Franciscan retreat center in New Mexico: ‘We see this as part of the Gospel call’ 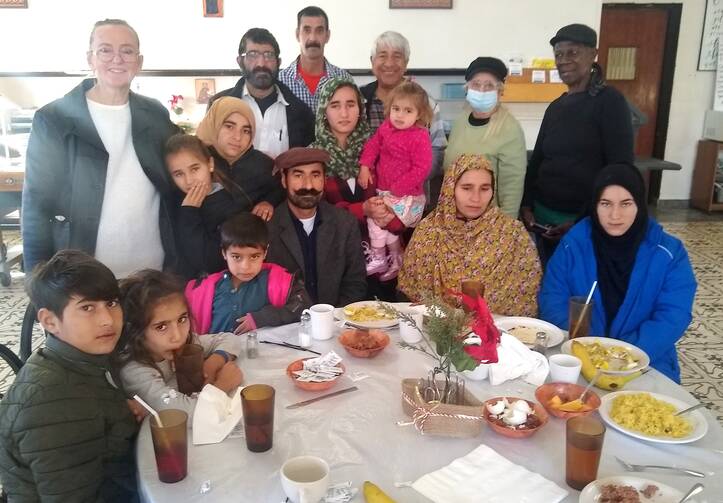 The Holy Cross Retreat Center in New Mexico has been offering Franciscan hospitality for more than 60 years. Naturally, that hospitality is extended most often to those who come to the center for retreats.

But it does not end there. Since 2015, the center, located in Mesilla Park, N.M., near Las Cruces, has welcomed 32 people temporarily experiencing homelessness and 42 out-of-town patients who had been receiving treatment at a nearby hospital. It has also offered shelter to six individuals fearing deportation and 631 families seeking asylum.

“We see this as part of the Gospel call,” Tom Smith, O.F.M. Conv., the director of the center, explained. “Pope Francis has said to reach out to the margins and help those who are in need, the refugees, the displaced. And we have a retreat center that has lots of space.”

“Pope Francis has said to reach out to the margins and help those who are in need, the refugees, the displaced. And we have a retreat center that has lots of space.”

Most retreats are on the weekends, he said, so the center has a lot of open space during the week. That is why the Franciscans started taking people in, including asylum seekers from Latin America and people who were experiencing homelessness during the pandemic. Some regular clients canceled retreats during the pandemic, which opened up even more space.

The center has welcomed guests from all over the world, including Nicaragua, Senegal, Colombia, Turkey and Haiti.

“I had to figure out how to use Google translate on my phone, so I could talk to the guy from Turkey,” Father Smith said. “I spent about three hours with him one evening, getting him in contact with his family, getting him an airline ticket, getting him clothes. And it was really difficult but a wonderful experience at the same time.”

In recent months, the center has extended Franciscan hospitality to refugees from Afghanistan, including a family of nine and another family of seven. The U.S. government pulled the last of its troops out of Afghanistan in August, ending a 20-year intervention. More than 120,000 people were evacuated during the withdrawal, including around 80,000 who came to the United States.

“There have been significant issues related to finding housing for them, as well as viable settlement opportunities,” said Don Kerwin, executive director of the Center for Migration Studies in New York. “The intentions [of the Biden administration] have been good on refugee resettlement, but the reality is the program hasn't come back in the way that it needs to yet.”

As reported recently in The New York Times, resettlement agencies have struggled to find a place for Afghan refugees amid rising housing costs and a reduced stock of rental apartments. Many of those who were evacuated worked for the U.S. government in some capacity over the previous two decades, and they faced grave danger in Afghanistan because of that service.

Jesuit Refugee Service is calling on Americans to advocate for Afghan refugees and urge Congress to pass the Afghan Adjustment Act, which would allow Afghan refugees to apply for permanent residence.

“These are people who risked their lives to work with the U.S. and partner with the U.S.,” Mr. Kerwin said. “And now, they’re here, which is great. They need to be fully resettled and integrated and taken care of.”

But not all of those who worked with the United States have been evacuated, he said.

“It's a very dire situation for people who weren’t able to escape,” Mr. Kerwin said. “There are many, many people working on it. But to try to get those people out of the country is extraordinarily difficult at this point. So effectively, lots [of them] have been abandoned.…And that’s a major tragedy and somewhat of a disgrace.”

Jesuit Refugee Service is calling on Americans to advocate for Afghan refugees and urge Congress to pass the Afghan Adjustment Act, which would allow Afghan refugees to apply for permanent residence.

Most of the Afghans who Father Smith has met do not know anyone in the United States and will stay at the Franciscan center until they find a place to live. The center has been working with Lutheran Family Services to resettle Afghan refugees, many of whom have been staying at Fort Bliss in El Paso, Tex.

“These are people who risked their lives to work with the U.S. and partner with the U.S., and now, they’re here, which is great. They need to be fully resettled and integrated and taken care of.”

For individual refugees, the stay can be as short as two or three days, he said, but it is more difficult to find a home for families. Staff and volunteers help them acclimate to the United States during their stay. At a recent dinner hosted at the center for the Serra Club, which supports vocations to the priesthood, guests brought gifts for Afghan families.

“It’s not just praying for the poor and making donations, but having direct assistance to them when we can,” Father Smith said, describing the charism his order inherited from St. Francis of Assisi, who emphasized care for the poor. “It’s about making them feel welcome. Not just ‘here’s your room and here’s your key.’”

Father Smith said the center has received a lot of support from the Las Cruces community. Recently he received two $10,000 donations “out of the blue.”

One local resident asked if the center had received a grant before deciding to welcome the Afghan refugees.

“I told him, ‘No, we decided that’s what we needed to do, and we’re going to do it first and we’ll figure out the payment later,’” Father Smith said. “And he laughed and said, ‘That’s the way to do it.’

“It’s a bit of a risk in some sense. But I believe the need is there.”